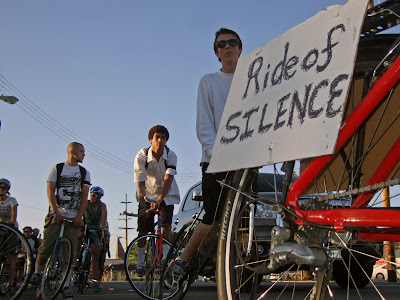 It was a thrill to see 35 cyclists show up for the Ride of Silence in Antioch. I was worried that only Tricia and I would show. But many Delta Pedalers, the local bike club, came, and perhaps even more exciting, my daughter Erin got the message out to a lot of her fixed gear friends who came too. Tricia had purchased two rolls of ribbon for armbands. It wasn't enough! We ended up safety pinning smaller pieces on riders. Red bands if you'd been injured -- and almost half had been in run-ins with cars -- and black bands for honoring fallen cyclists. We were a part of 216 rides in 16 countries. 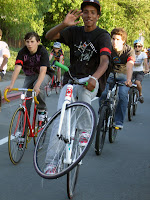 There aren't a ton of cyclists in Antioch. At least that's what I'd thought. And I certainly wasn't aware of the young guys fixed gear community. But there they were. What a cool bunch of young men. And the way they ride those fixies. Amazing. I think they had a good time.

I'd put on the poster "Wear a helmet" but these guys came without them. I didn't feel like I could send them away, so they rode helmetless. What's a guy to do?

We did a very slow lap around North-of-the-freeway Antioch. Many people waved, gave us a thumbs-up, or honked in support. I'd been a little concerned about the ride in that this city isn't used to seeing a large group of cyclists become the traffic. But Antioch came through quite nicely. Only one car-driving misdirected soul threw fast food trash at us. Much better than I had worried about.

I need to find money for pizza when I do this next year. Those fixie boys are really thin.

More photos by Branden Hays on his web site.
Posted by Curtis Corlew at 10:02 PM

Email ThisBlogThis!Share to TwitterShare to FacebookShare to Pinterest
Labels: antioch, Ride of Silence