This can't really be a review because I didn't ride it, she did. But she seems happy. She likes the feel, the 40mm tires, and the gearing. It feels like it fits, though a minor tweak may be in order. She'll get a different saddle eventually. And water bottle cages. And lights. And a rack. And panniers.

Posted by Curtis Corlew at 1:53 PM No comments:

Salsa Vaya. Orange you glad she got a new bike 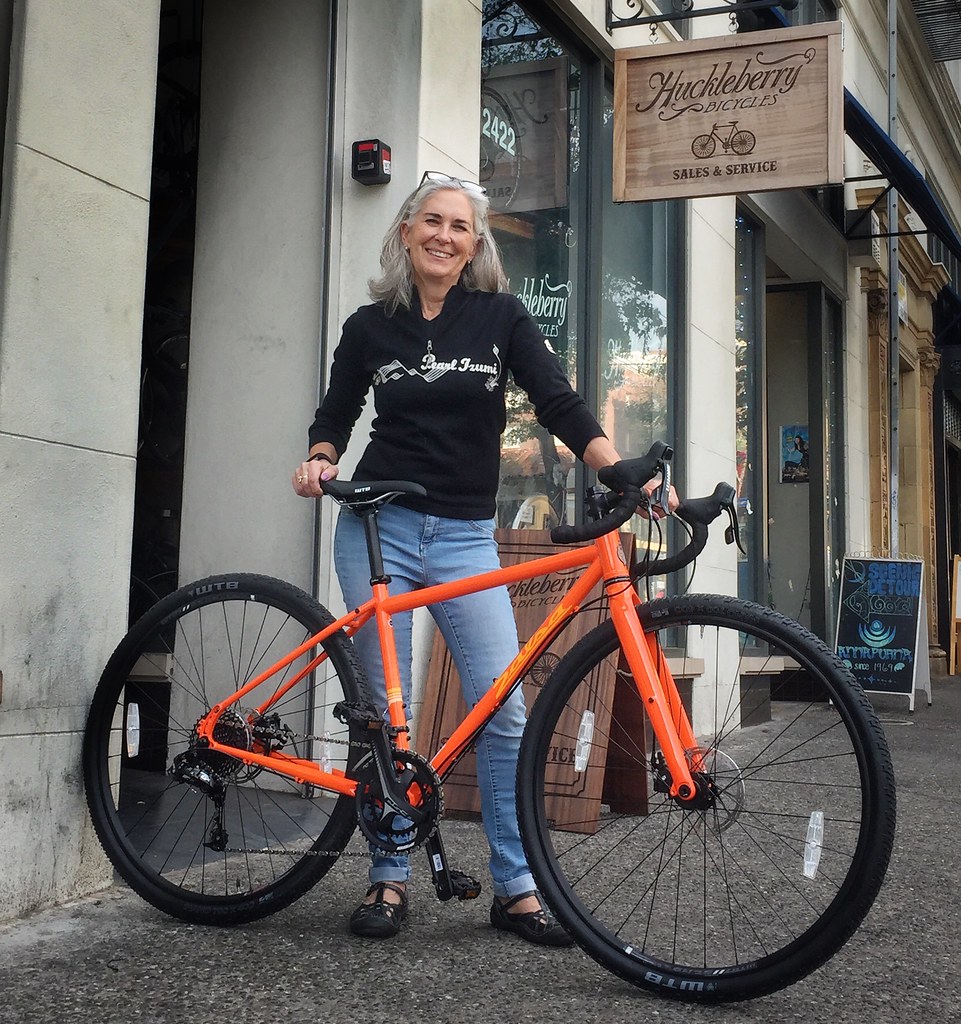 I'd been wondering why a middle school teacher would volunteer to take on an extra class. When Tricia announced she was getting herself an early Christmas present I knew why.

It's a swell Salsa Vaya. She'll use it for commuting, light touring and maybe a bit of playing on dirt roads first.

Like all new bikes, it's pretty now. But soon it will have water bottle cages, lights, a rack and panniers, a Garmin and a tail light. Maybe a front facing camera. We should enjoy it as it is, for a moment, standing as a work of art before it becomes a work horse.

I'm also placing partial blame (or credit) on Russ Roca from Path Less Pedaled, who wrote glowingly about this bike, and Adventure Cycling's Jim Sayer who toured on one last summer and wrote about it.

Tip o' the hat to Huckleberry Bicycles in Berkeley for having a timely sale and being pretty darn pleasant to deal with.

Tricia made me go shopping with her. @4tcakes2 #huckleberrybicycles
A post shared by curtis corlew (@cccorlew) on Nov 22, 2017 at 6:52pm PST

Not every morning commute roadside find is some weird piece of jetsom. Today was a pleasant surprise #ccbiketrailoffering
A post shared by curtis corlew (@cccorlew) on Nov 9, 2017 at 7:38am PST

Posted by Curtis Corlew at 7:12 PM No comments:

What's my blog without a yearly Giro D' Vino post? I'm not about to find out

Weather was cool, but no rain and no fog and not much wind worked for me. As always we bougght more wine than we'd planned for. Oh well.


Tricia in front of a zillion gallon vat if #michaeldavidwinery #freskshow on the #lodi #girodivino #girodivino2017
A post shared by curtis corlew (@cccorlew) on Nov 5, 2017 at 12:02pm PST

Apples at McCay Cellars on the #girodivino in #lodi #girodivino2017 #mccaycellars
A post shared by curtis corlew (@cccorlew) on Nov 5, 2017 at 1:40pm PST

Posted by Curtis Corlew at 7:10 PM No comments: