Yep. I did it. I signed up for the Devil Mountain Double Century.

I've agonized over this sine January. Can I do it? Should I try. In the end, the deciding factor was "I'm not getting any younger."

From the description on the Triple Crown site: "On this ride, you'll have the opportunity of climbing Mt. Diablo and Mt. Hamilton in the San Ramon area. Certainly "not for the faint of heart", this ride is a major challenge for sure!!

Sierra Road will be your biggest test: not only is it incredibly steep, climbing 1,800 Feet in 3.2 Miles, but it comes after 150 miles!!

Most of this ride is very rural, very scenic, and very low on traffic. The terrain is unspoiled and rugged. If you like to climb and are ready for a real challenge, this ride's for you!!"

Notice that I used a Christmas stamp with the baby Jesus on it. Pray for me.
Posted by Curtis Corlew at 7:52 PM 1 comment:

Solvang Double Century in the wind 2012

There aren't many photos from the Solvang Double. It's too hard to drag out my iPhone wearing glove liners, and even if I do the screen doesn't react. So this is it. LanceOldStrong, Me, and Spingineer in our extra-fine looking California Triple Crown Gold jerseys at an early rest stop.

Solvang is supposed to be an easier double century (like there is such a thing.) Lance Oldstrong, my road partner and room mate for this adventure met Spingineer, a BikeForums buddy, and launched  at 5 am. We rocked. There wasn't any of the expected rain I worried about, and there was no wind. We danced up the climbs. We had a ball. We were fast enough that the Planet Ultra folks at the first rest stop chastised Oldstrong for getting there too soon. We knocked off the first 100 miles in six hour and were thinking we'd get back before dark.

Then it all changed. The storm coming in brought winds from the south, exactly the direction we were heading. I checked Weather Underground and we had 20 mph headwinds with greater gusts for endless miles. At one point a group of 20 cyclists was moving at about 9 mph up a very slight grade. It was crazy. I couldn't hold the wheels of my more powerful friends in the big winds and oozed along by myself for a long time, exhausted and depressed.

My pals had waited for me at the last rest stop. LanceOldStrong made me drink a cup-of-noodles thing, which I'd never had before, but really hit the spot, and we were off. After a bit I found I couldn't hang on and let them go.

I've never been so relieved to get to hills and out of the flats and wind. Once the road turned up I felt a lot better. I caught, and passed, Oldstrong and Spingineer. I took it easy on the downhill until they caught me, where we used our combined bike-light candlepower to really light up the night roads.

The second 100 miles ended up taking 10 hours. LanceOldStrong and I rolled in together 15:58 after we started, with 14:21 of riding time, a few minutes after Spingineer. Still, that's seventeen-point-something mph for the first 104 miles.

When we finished and checked in we grabbed a shower back at the hotel and discovered there is no place to eat in Solvang at 10 pm. We ended up at a Burger King. I haven't had fast food in ages, and now I remember why.

Strava says I have a 673 "suffer score" but Strava doesn't know about the wind. And it say "no achievements" but heck with them. Just finishing and making the time cut was a big deal

I don't have much of an opportunity these days to revisit my photography career. Even though I teach photography, I don't actually shoot very much any more. When  I do shoot it's mostly just bicycle-related snapshots for this blog, or demonstrations for class. So when LanceOldStrong asked if I'd make a photo of his bike for a project he's working on I was thrilled to have an "assignment" again.

This is one of my efforts for that assignment. I tried to evoke some sense of non-specific nostalgia with the picket fence and the out-of-focus lad on the steps. I hope cycling enthusiasts will recognize the La Vie Claire colors of Lemond and Hinault on the jersey. At least that was my plan.
Posted by Curtis Corlew at 8:49 AM 2 comments:

I may be ready for the Solvang Double 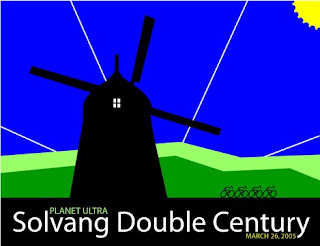 I'd somehow let my weight climb to the point that when the year started I'd crept back up to 160 and a bit more. I needed a goal, and I figured signing up for the Solvang Double Century would put the fear of failure into me and motivate me to train and lose some weight. I'm hoping it worked. The ride is a week away now and I think I might be ready.
I've done what I can do.  Even with this annoying cold I didn't loose training or gain weight. I'll try a hard ride or trainer session Sunday, then taper for Saturday. My goal isn't to hammer, just to finish feeling reasonably good.

If it works, I'll have enough data to decide if it's wise, or possible, to proceed with my next cycling goal.
Posted by Curtis Corlew at 8:36 PM 1 comment:


On Sunday's ride with LanceOldStrong and Midland, we determined that all bicycle ride reports should start with a list of excuses. We are, after all, cyclists. Therefore:
LanceOldStrong — Rode the Death Valley Double last weekend and is still in recovery mode.
MidLand — Had to stop a lot to take a natural
Curtis — Suffering badly from a serious cold and had no business being out at all.

With all of us in excuse agreement we headed out from the Crank2 bike shop in Pleasanton to ride a "lollipop," (At least that''s what Oldstrong calls an out-and-back with a loop at the end) and introduce me to the stunningly steep Sierra Road.

I'd feared this road. As you can see, it has double digit climbs (see chart below) with no let-up for 3.5 miles. My goal was to get up it alive. Preferably without stopping, but that was optional. I just wanted to get through it.  After a cool but delightful ride up — and down —  Calavaras Road we got to flat San Jose, then turned left into a flippin' wall. Midland and Oldstrong quickly rolled away from me as I tried to contain my heart rate. I was glad I'd just installed a cassette with a lower gear as some sections made me worry I'd just not be able to get the pedals around one more time.

After about 2.5 miles I realized I was doing OK and was going to finish, I thought "What the heck" and just went all out. All out, as in crazy-high heart beat, drooling snot and screaming legs. Amazingly I caught my partners and even passed them for a moment. We finished pretty much together, or as Oldstrong said "A team NorCal podium sweep!" even though there was no one else around to claim victory over. For the record, my time was 40:31, not that I'm keeping track or anything.

My cold pretty much kicked in after that and I was toast for the rest of the ride. Coming down the hill Oldstrong had warned us several times not to miss the turn at "the wall" onto Calavaras. I managed to  anyway, and did something I haven't done in over 20 years. I'm blaming the cold and Sierra Road. I turned slowly, pushing 52x11 and executed the perfect no-speed, Fred-alicous, tip-over idiot maneuver. Sadly, my compatriots were able to observe it as it happened, so I couldn't even make up a heroic tale about saving the life of a child or something.

We rolled back to the car ... the car that I'd safely locked my keys inside of. Fortunately, I am an AAA member, and while we waited ate pizza, AAA arrived and popped the door. All was good again, and Sierra Road is checked off my bucket list.

Good evening ladies and gentlemen! Tonight, the much anticipated match-up between Shimano brothers.

In this contest we'll see just how much that 87 gram (3.06883469 ounces for you Americans) matters on a bicycle. Though Tiagra surely weighs more, there's the matter of teeth to take into consideration. That 12 tooth vs 13 tooth high end likely won't matter with a 52 tooth chain wheel, so we'll call that a draw for now. But on the low end, where the real contest will take place, that 30 vs 28 may make all the difference when the hills hit 12 and 15 percent.

Is it better to be low, or light? How much will that 3 ounces matter, or, put another way,  will 24.5 vs 26.25 gear-inches make up for that 3 ounces? Both combatants will be paired with a 52-39-30 support staff and a long-cage derailer in their corners. Settling this contest is why we meet here tonight.

This fight promises to be a rough one, with trash talk even appearing on the Tiagra Box, placed there no doubt by Ultegra fans. Since both lads are looking at double centuries, Tiagra faithful ask "How can Ultegra characterize Tiagra in such a dismissive manner? It's just BS coming from a lighter sibling" Ultegra fans just continued their chant "Fat! Fat! Fat!"

We'll be back right after a word from our sponsors with tonight's featured match, and find out what Sierra Road near San Jose has to say.
Posted by Curtis Corlew at 10:08 PM 1 comment:

North American Handbuilt Bicycle Show in Sacramento was amazing. We spent the day filled with bicycle lust. I really wanted an eleven-pound $13,000 carbon piece of cycle goodness — Festka — that even came with it's own signed and numbered matching jersey. In the end, I bought a nice chain, a ti wrench for the fixed gear bike, and a bit of bike jewelry for Tricia.

She liked her bracelet, but really fell in love with a sweet steel-frame Cielo and it's matching fenders, complete with all Chris King parts. But we didn't order one.

We did get to meet cycling-clothing goddess Sheila Moon, who I think was amused by our celebrity stalker treatment of her when I asked to shoot a photo of her with Tricia.

Among the goodies we saw:  Bamboo bikes, hardwood bikes, a Brompton semi-formal cycling jacket that I loved, a whiskey flask bike mount, Carbon belt drive (to replace chains) Fat tire bikes with four-inch wide tires and only half a fork. We went to an art bike parade, a gallery featuring bike art, and had dinner with BikeForums.net buddies.

Here are a few photos, more than I usually post, but what the heck.