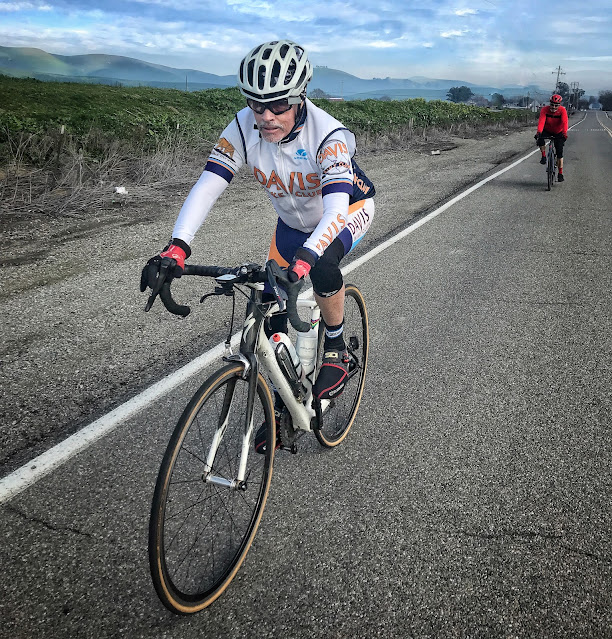 I'm back in California under beautiful skies while my family is in 11 degree weather and snow in New York's Finger Lakes area. I should feel guilty, but, well...
I got in a classic Northern California ride with my friends Dan and Steve on Sunday — one lap around Mt Diablo via Morgan Territory. Even at a social party pace it's an effort, but it sure was fun.
Posted by Curtis Corlew at 7:19 PM No comments:

Back in California for a while 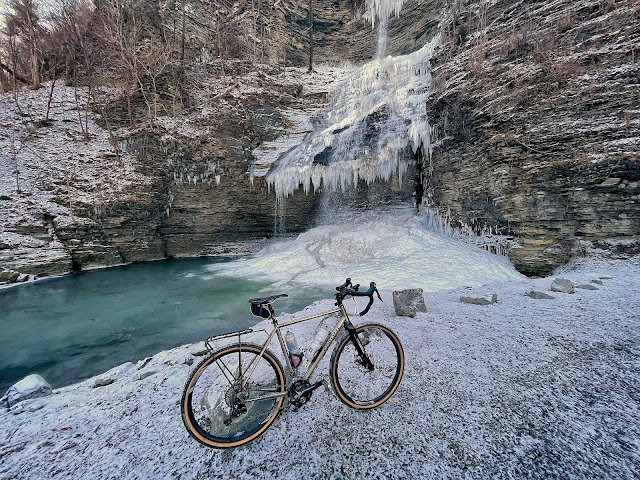 No, this isn't California. It's from my last ride in New York before I came back.

I'd committed to teaching in the spring semester before we bought a house in Watkins Glen in the Finger Lakes. So I'm staying here. I'll enjoy the warmer weather. It was 11˚ in NY and 50˚ here today. But I'm sure looking forward to starting my new life once the semester ends.
Posted by Curtis Corlew at 5:35 PM No comments:

Adjusting to colder temps in the Finger Lakes

As I contemplated the new dusting of snow outside thinking how cold it is I saw a young lad cycle past my house. Apparently I am not a "hard man" at all.

But there's Zwift! Lance OldStrong, master of route finding in the real world as well, organized a meetup in Zwift France with friend Monroadie and myself. That's me closest to the camera, looking in Zwift pretty much exactly as cool I must in real life, though I wear a helmet in the non-virtual world. That's Lance Oldstrong with the cool hat, and MonRoadie looking as calm as he really does.

Bonus photos:
It really is somewhat cold. The nearby waterfall is growing icicles.

We walked downtown to watch the 49er game (it wasn't on any TV I could get) and it started to snow. Even I had to admit it was wonderful.

From my front sidewalk I can see seven American flags flying on neighboring houses, so I know I'm I'm still in the USA, but it's a different USA.
If nothing else, the weather is drastically different. Yesterday the skies were blue and the temps hit 50. I took advantage and rode the half mile to the check out the harbor on Seneca Lake before my longer ride up a local trail . Yet today it's supposed to lightly snow and rain. Photos on this date from last year show a winter wonderland. 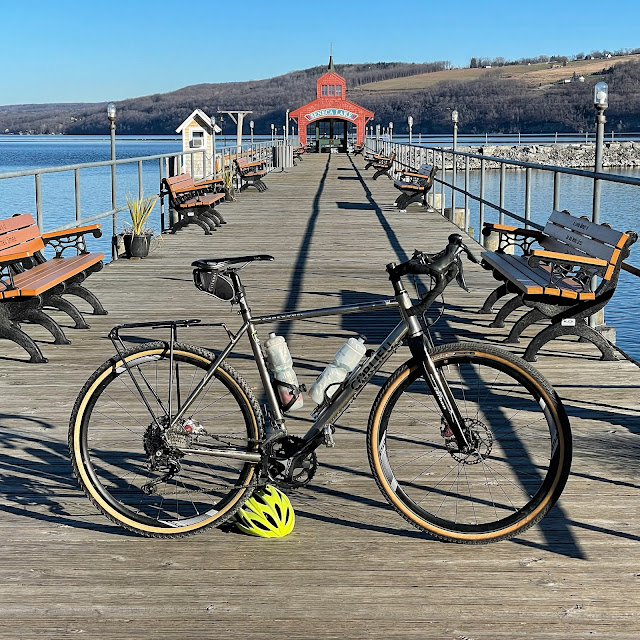 The Catherine Valley trail, which starts just a few hundred feet from my house is a delight. It runs through the forest on an abandoned rail line. But it has a few features different from any other trail I've been on. 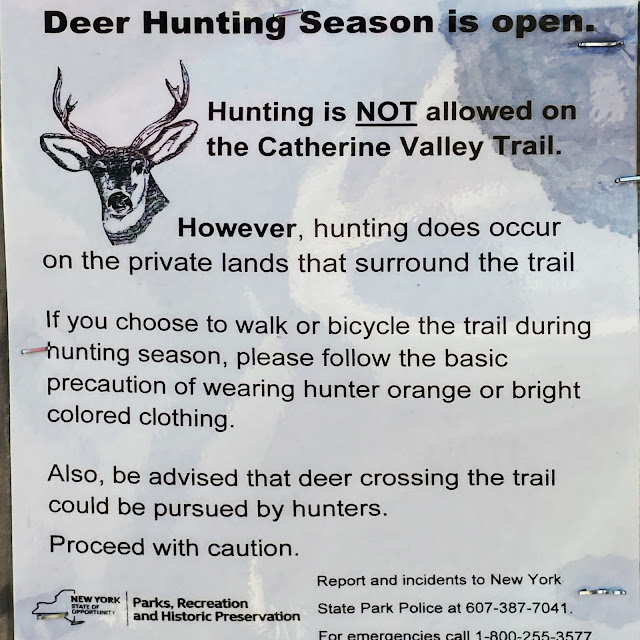 On my ride I met the landowner, Kirk, and his friend who were taking a break on a trail bench while out hunting. The trail runs through his property. He was kind enough to chat with with me and explain muzzle loading season. If I'd have come across guys with guns on my California trail I'd have been concerned. Here it was a opportunity to learn a bit more about my new home. 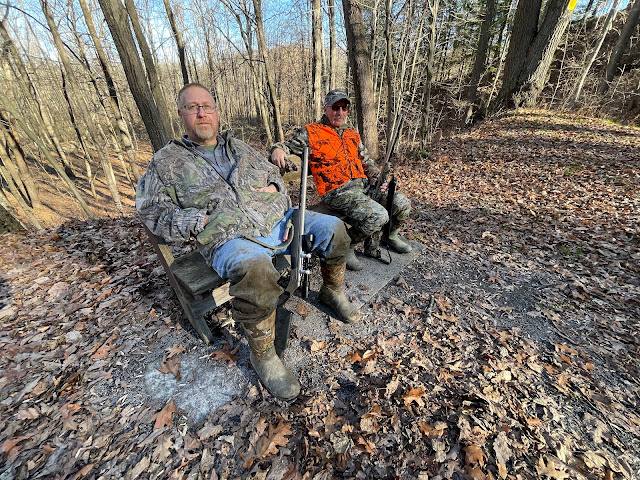 It's an adventure for me. But so far everyone I've net has been, from the postal delivery person to the hardware store folks, from the neighbors to the winery folks (this is a wine growing region!) , have been a pleasure to chat with, and have been generous in sharing their stories and their tips for the new guy.
Here's a non-cycling bonus photo of us wine tasting at Atwater Winery.

And another non-cycling photo, just because:

Posted by Curtis Corlew at 4:32 AM No comments: 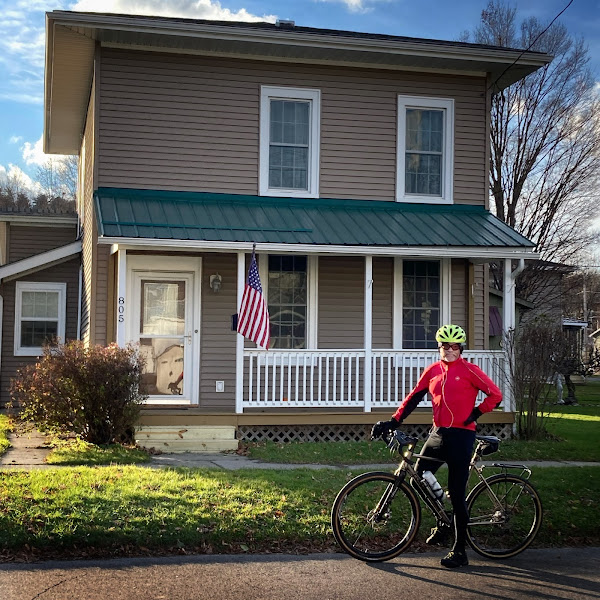 Watkins Glen in New York is cold. Not cold enough to impress folks used to cold, but cold enough for this Californian. I haven't been warm since I got here. I did try a short ride, wearing fleece tights, several layers under my jacket, glove liners and gloves along with an under helmet hat. Not enough... And this is all before the clouds took the sun.
Today it's raining. It's supposed to snow later in the week.
I bought a smart trainer, but the tools I need to get it up and running are in California staying warm.
Oh well. So it goes.
Posted by Curtis Corlew at 7:18 AM No comments:

After a great summer of cycling I missed several weeks getting ready to move. At last I'm back on the bike. To celebrate my friend Dan (AKA Lance Oldstrong) took me on one of his interesting routes. san's famous for finding hidden trails and surprise cut-throughs.
Today I saw parts of Concord and Clayton I didn't know existed, including a pioneer cemetery, hidden historic path, an 1800-era winery building and even a nature park and arboretum.
All in all, a great way to get back in the saddle.
Posted by Curtis Corlew at 10:41 AM 1 comment:

The 2021 Foxy's Fall Century in Davis CA was a weird adventure for us. And our first 100 mile effort in a long time.
We'd stayed the night at a low-end Motel 6 so we wouldn't have to drive, and could arrive early to get good parking and registered quickly.
The Davic Bicycle Club made the morning easy with good coffee and pastries.
But then things started happening. Our friend who was supposed to meet us at 6 a.m. called to say she was having trouble getting the front wheel off her newish bike. She eventually did, but arrived later than we'd have liked.
When I helped her put the bike together I realized she had a new-style semi-quick-release thru-axle and didn't need the wrench she thought she needed. All that waiting for no reason.
But eventually we got started.
It was 40°, so I wore a lot of clothes and was pretty comfortable. It eventually got into the high 80s, so I was thankful the Davis Club's drop bag plan, where they take clothes from a water stop back to the ride start for you. I wish they'd have offered that at lunch and not just the first water stop.
Interestingly, the water stops were great. The last one in particular was well-stocked and friendly. Alas, something went wrong at lunch. Maybe it was because we were at the end of lunch time (but still within the "open" time) , but they were out of almost everything and downright stingy with potato chips. And a bit grumpy as well. Thankfully, the last stop made up for it.
Our friend Kellie struggled with  knee issue, and we ended up waiting for her a few times before she realized she needed to stop making it worse and sagged back. Between the late start, the too-long break at rest stop 1 and waiting the day lasted a long, long time.
Still, we made it. It's good to know we can still knock off 100 miles, even if it takes longer than it used to.
Posted by Curtis Corlew at 8:04 AM No comments: 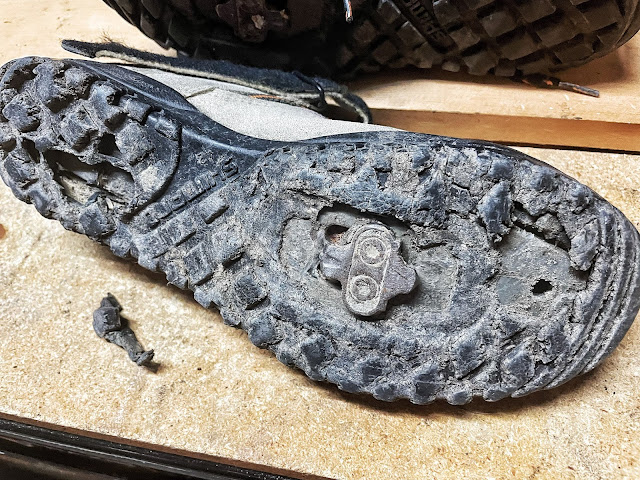 After years of commuting and a full summer of riding my Shimano SPD SH-M036W just dissolved. I'm pretty sure it isn't that I'm putting so much power into my stroke the shoes couldn't handle it. But I'm not sure what what the heck caused the sole left shoe, and not the right, to just fall apart.

So I got new shoes. Of course, these aren't made any more, so I got something different. I like the new ones, but I don't love them. So it goes.

Posted by Curtis Corlew at 5:54 PM No comments:

Summary:
A few details
Where are all the photos? There are so many I'm intimidated. I hope to make a Blurb Book. But in a meantime here are a few. 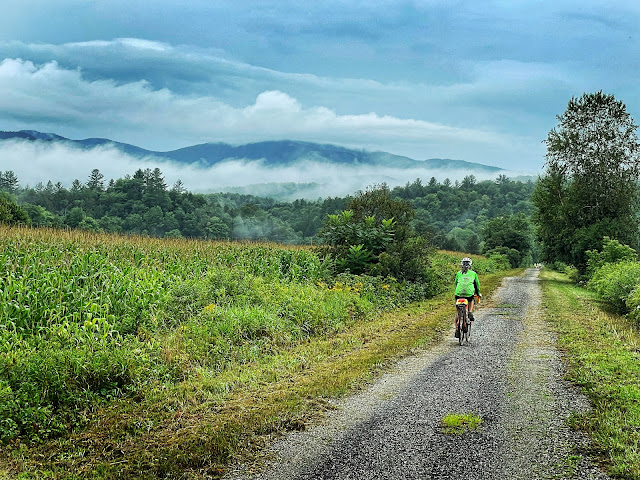 Vermont, gravel roads, green and a bit of rain. 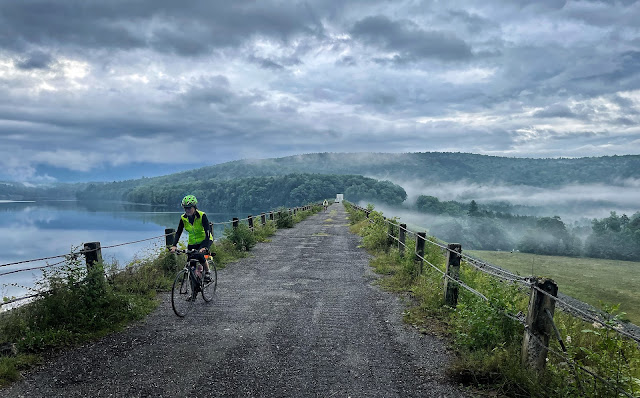 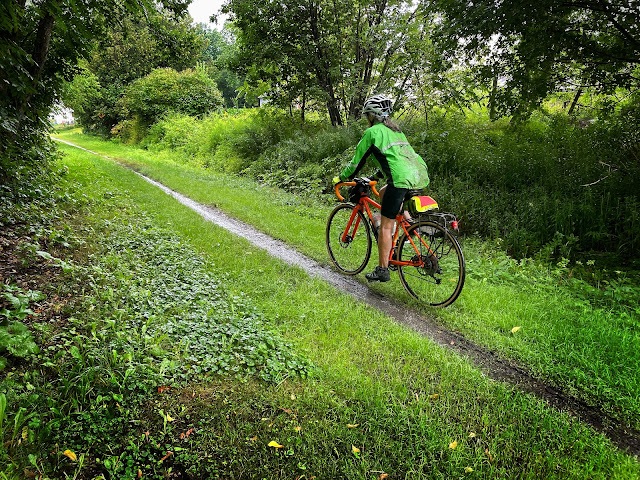 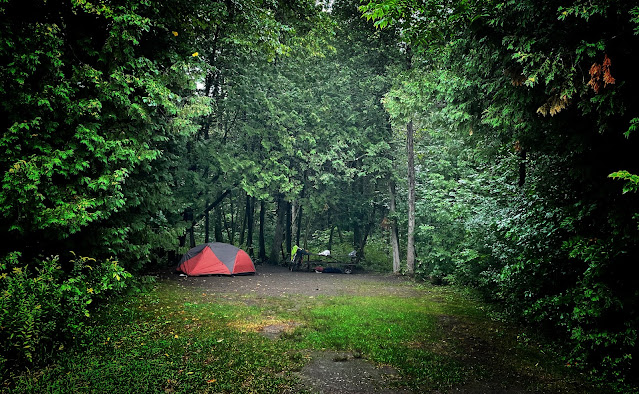 Most of our camping looked pretty much like this. 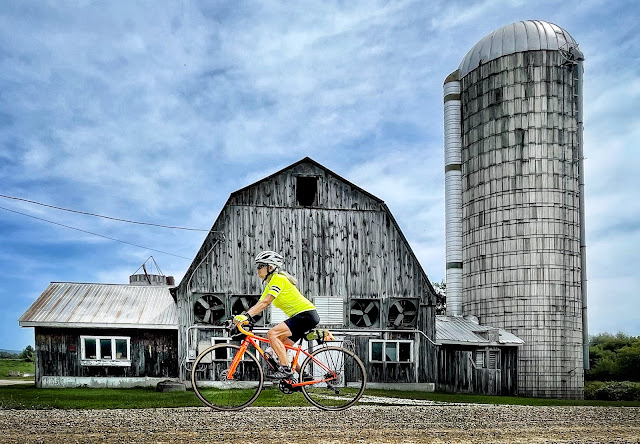 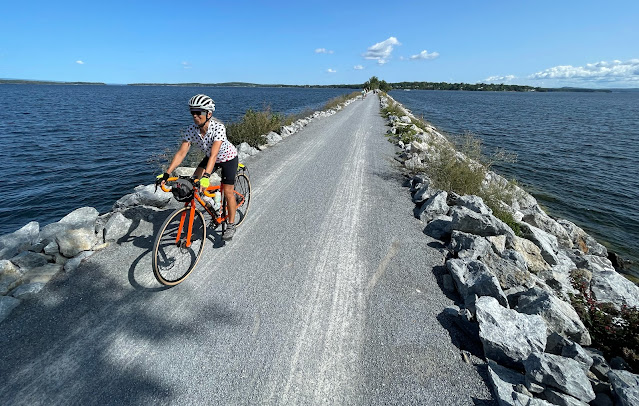 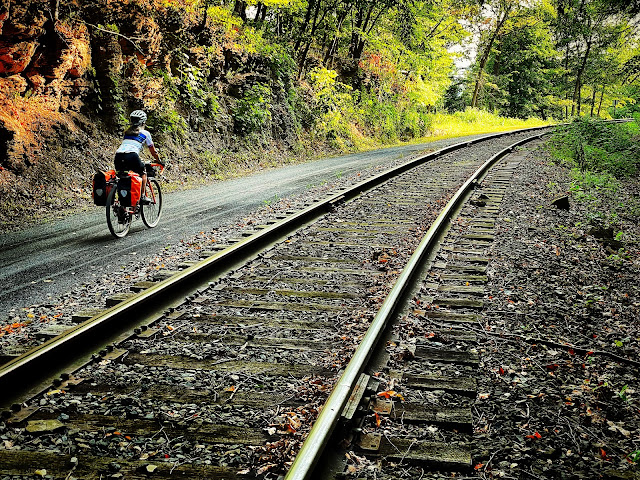 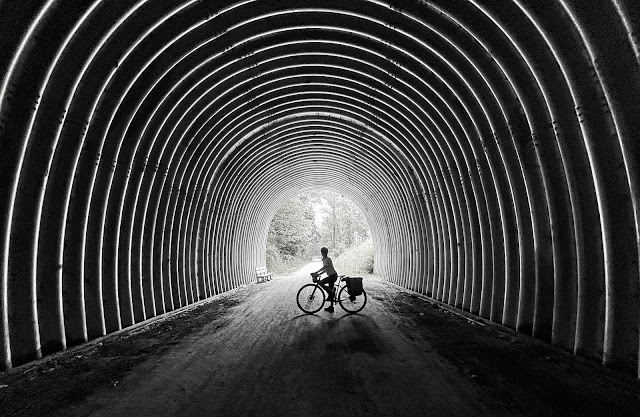 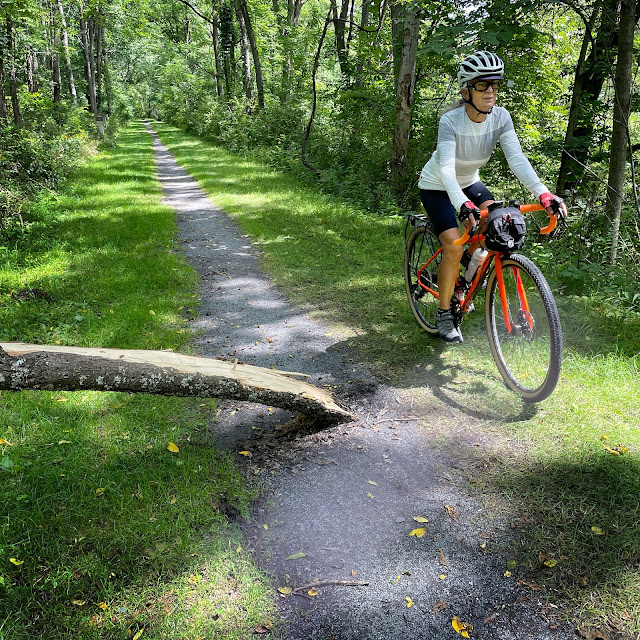 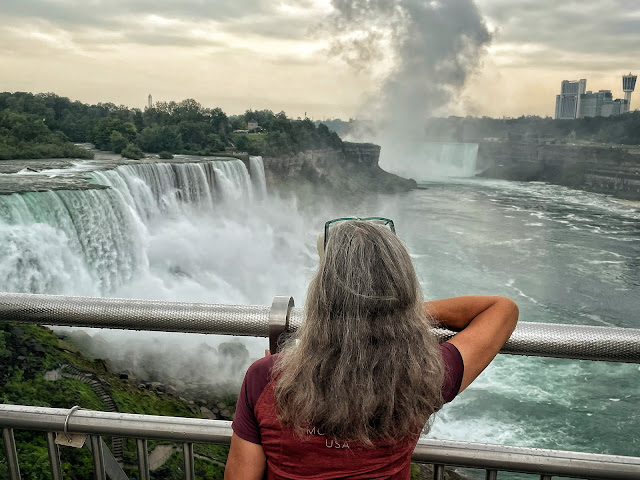 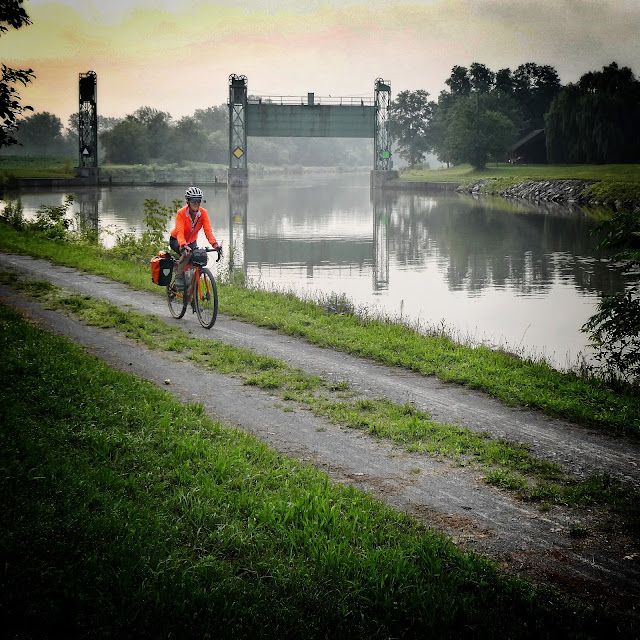 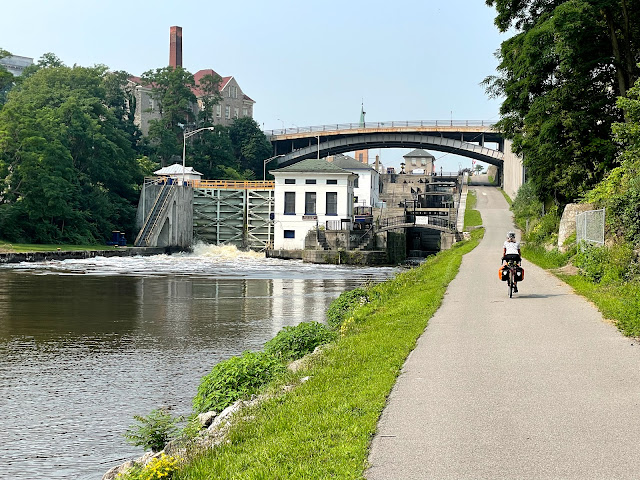 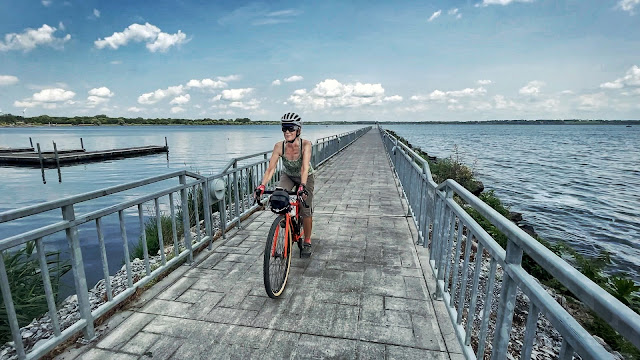 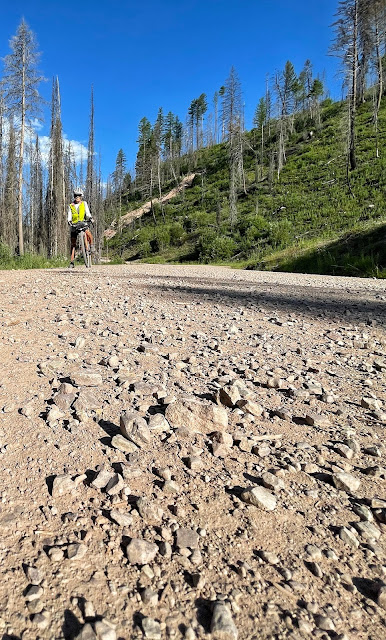 They said Cycle the Divide was on dirt roads 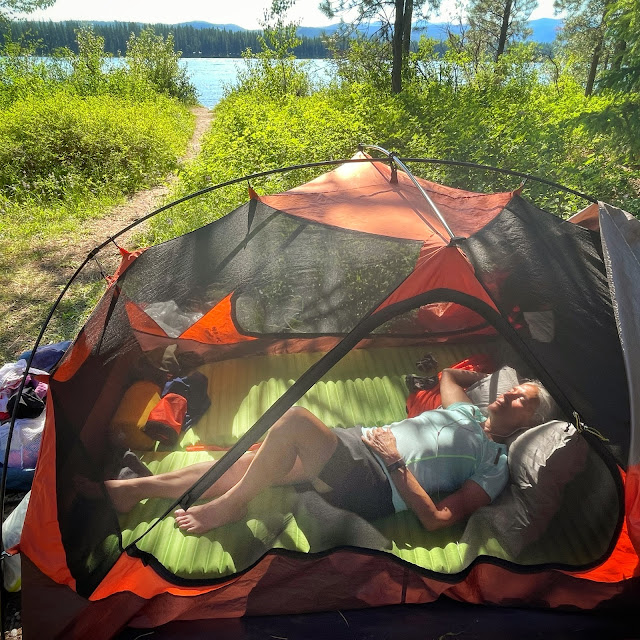 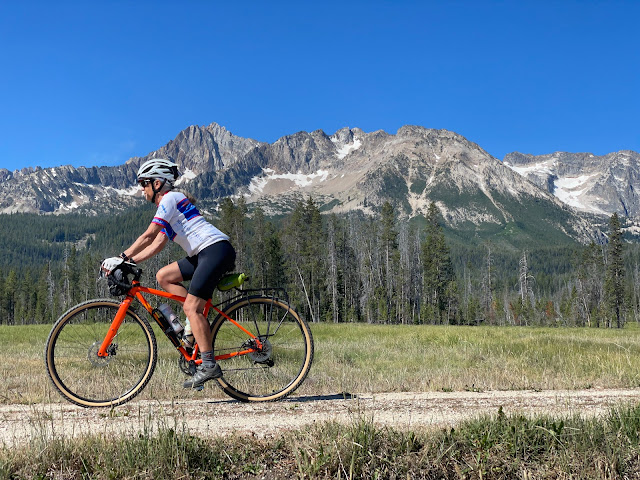