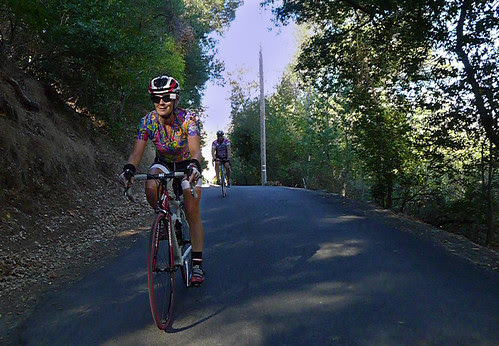 When Bike Forums member Joel from Sacramento posted "I want to ride Diablo" Lanceoldstrong went into action and planned a ride around and up the mountain. Complete with custom route slips (including an elevation profile) 21 of us launched from Heather Farms part at 9:00 am.

I almost didn't go as I was feeling pretty ill, but I'm glad I did. Tricia and I managed to hang in pretty well until Morgan, then the younger, thinner and more studdly took off. They were kind enough to regroup at the top.

This may be the first time I took "the plunge" down Morgan without huge crosswinds. It is still both exhilarating and terrifying. At about 42 mph I was passed by Joel, Lanceoldstrong and company like I wasn't moving.

After a lunch stop in Danville, Tricia and I slogged up Diablo, and back to the parking lot. After satisfying my usual post-ride sushi craving, we headed home.

Thanks BF! A good ride was had. 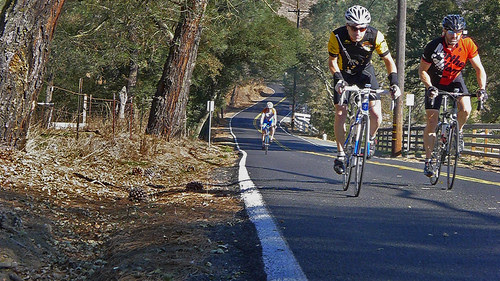 Posted by Curtis Corlew at 8:30 AM No comments: 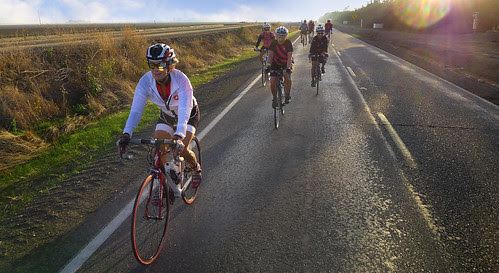 Even though the 2011 Foxy's Fall Century was sold out, we'd heard that if we arrived early enough we'd be able to get in. When we arrived at 6:20 there was a heck of a line waiting to get in, but they were still handing out pens and forms so we scribbled our info in the dark. By the time the doors opened our spot in line looked golden; there were three times as many folks behind us. The line went very quickly once it started moving, and after a bit of panic about "Cash Only" (We had enough. Barely.) We managed to hit the road at 7:15.

Starting early kept us out of most of the boy-racer-without-skills and I've-never-ridden-a-bike-before madness, though I'm always surprised how many of my fellow cyclists think "Share the Road" signs are an invitation to take their spot out of the middle of the lane.

The weather was just about perfect too. Not too hot, not too cold, just right. This ride is different from what we're use to. I think there was less than 100 feet of climbing in the first 25 miles. Still, rolling through the farmlands at dawn near Davis is a wonderful way to start the day.

We had an uneventful but fun ride to lunch. Then, as I ate my peanut butter sandwich,  we heard a very loud, airy explosion and saw a big puff of dust... coming from where I'd put my bike down. Yep, my front tire had exploded! It had blown off the rim. A bystander suggested it was because I parked in the sun. Yeah, I'm sure that was it. Because I never ride in the sun or anything. The tire was OK, we tossed in a new tube, and then I saw it...

I realize there is a wide variety of taste, one man's ceiling is another man's floor, beauty is in the eye of the beholder, and all that. But this, this is without doubt, the most ugly. ugly, triple-ugly cycling jersey I have ever seen. It didn't appear to be ironically ugly, or humorously ugly, it was just amazingly ugly. I present it to you here and challenge you to find one worse. If you can, post a link in the comment section

From the fifty-mile lunch stop the ride actually climbs a bit. Tricia and I are always surprised that so many people who blow past us on the flats sections crawl, suffer, blow up and even stop on the hills. But like all hills they eventually end, and we got a nice downhill back toward Davis.

There's a bike swap at the finish, and usually a booth selling DeFeet socks, so we bought a few pairs and went home happy. 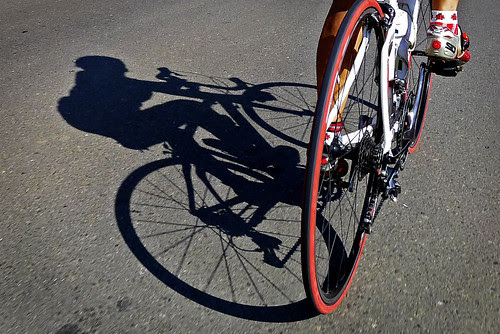 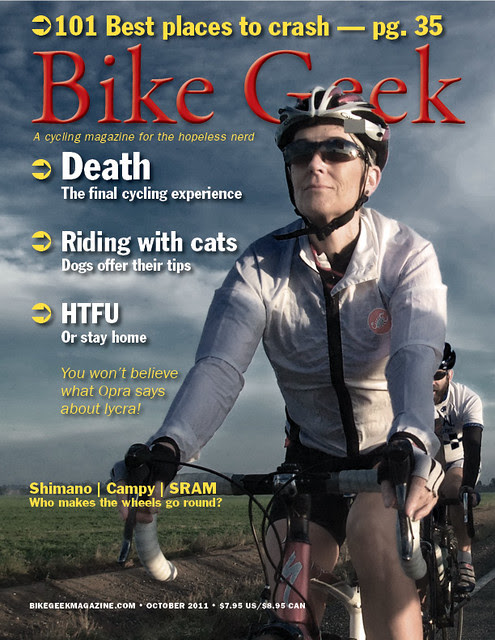 I've been working too much to ride enough or even post about not riding enough. But I do have this:

When I gave my InDesign class an assignment to create a magazine cover they complained it was too hard. So I knocked this out in half an hour to show them how easy it could be.

Here's hoping I can ride more again soon, and not become so fat I don't fit my cycling clothes any more. At least I'm getting my daily bike commute in. With the wind and the new sticker-proof extra-fat super-slow tires it is at least a workout.
Posted by Curtis Corlew at 5:33 PM 4 comments: