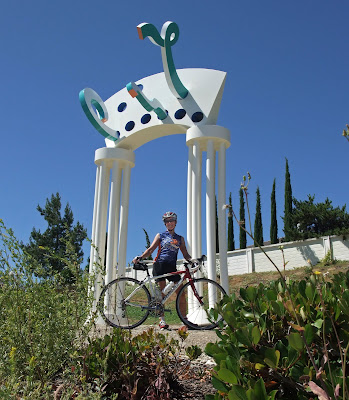 I'm going to try adding a new feature to this blog: Public art that I see on my bike rides in East County, particularly Antioch, Oakley, Brentwood and Pittsburg.

When Tricia and I rode past the new sculpture at the corner of Rockspring and Mt. Hamilton in Antioch, I swear I thought Antioch had at last embraced a Dr. Seuss world view. The piece, by artist Robert Ellison, is both monumental and whimsical. It twists like the wind is about to take it down, and looks like... well, it looks exactly how it looks. If you don't smile, or even laugh, when you see it you're just missing out on life somehow. 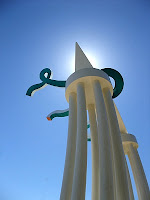 As with much of the public art in Antioch, the problem isn't the art as much as it is Antioch. As fun as the piece is, it's dwarfed by the surrounding homes and light poles. I can't help but think how much more interesting this piece would be in a less crowded environment. Maybe it says something about Antioch that the largest pieces of public sculpture in the area are traffic lights. We're so used to them we don't see them, but they are amazingly large cantilevered light-emitting, sway-in-the-wind, big-dollar public monuments. This little piece has a hard time competing.

Judging from the newspaper web site comments, this piece seem to be confounding the citizenry of Antioch much as the delightful Sprint Poles befuddled the city of Concord a few years ago. I always fear we'll only get the art we deserve. I'm hoping this shows that isn't always true. This work is a step up from a lot of the trite, predictable pieces we have elsewhere in the city. I hope it's a trend.
Posted by Curtis Corlew at 2:27 PM No comments: 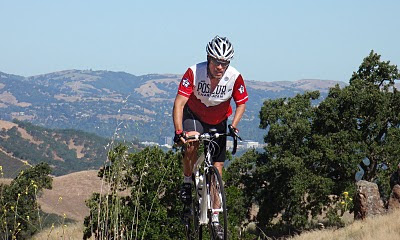 Photo from Diablo Scott and his magnificent blog
It's now official: I am slow.
This isn't exactly news, but it the first time it's been 100% official, complete with numbers and statistics, officially timed and UCI certified.
My start time was 9:26. I know that because I wrote it in sharpie on my leg because I just couldn't keep it in my head.
I competed in the 55+ group. My single-day race license had me as 16 years old, but that got sorted out at the the registration table. As I pined my number on I saw zillion dollar bikes on wind trainers, ridden by the amazingly thin. I just rode around a bit to warm up.

The start was an official platform, just like the one ones at the races you see on TV. That itself was intimidating. I was worried I'd slip just walking up the ramp. There was a holder, and I was worried I'd fall over, or somehow screw up. I'd read that I should be careful not to start in too big a gear, so I didn't.

And BOOM, I started.
My plan was to start relatively easy and ramp up as I went along, saving a lot for the last third. But I was too too excited. I was at 95% of my max heart rate in seconds. I passed my first rider in about 3 minutes. Unfortunately it wasn't a racer, just a rather heavy cyclist out for a ride. Oh well. I was passed by some rocket lad at about mile one. Many others passed me before I finished. I lost count.

I was trying to keep my heart rate at 92-93%. Any more and I'd have died before I finished. I did have bursts of 95-96 and dropped down to the high 80's just for a moment when I lost concentration.
I saw Diablo Scott making photos, and, when I saw a small car-flattened snake I thought I should photograph it for him for his road kill report. But I had no camera, and it was, after all, a race.

Eventually it all ended about 6 miles later, right by the ranger house. It's now hours later and my chest still hurts from breathing so hard. I know I'm slow, but I can't believe how fast some people blow past me. It's just amazing.

I'm waiting for the results to be posted on the web so I can see if anyone was slower than me. When I looked at the sheets they had taped up, I didn't see anyone who was.
On the up side, I had thought I'd hit 50 minutes. I think my official time was 42-something, so I beat my estimate. And I didn't die, or screw up any one else in their attempt.
Still, it would be swell to be just a hair less slow — to maybe break 40 or something.

I guess there's always next year...

BREAKING NEWS:
The results are up. I was not last. There were five mens finishers slower than me. Sure, three were juniors. And I was last in my group. But I'll take what I can get. 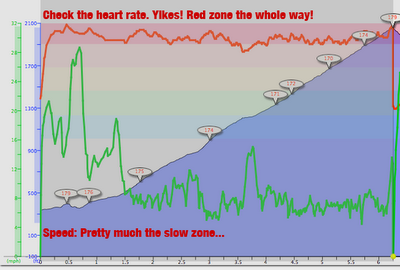 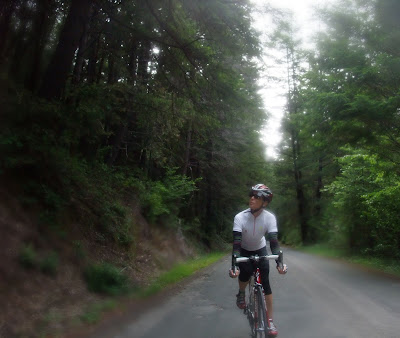 The Mendocino Monster lived up to it's name. It really was a monster. Though it was billed as a century with 8000 feet of climbing, my Garmin reported it as
111 miles with 10,379 feet of up.

Tricia and I started the night before with a dinner in Ukiah at Patrona with a contingent of Bike Forum folks. The food was wonderful, but I don't know if I've ever been to a slower restaurant.

Sunday Morning we rolled out of the parking lot right at 7am. I wish the organizers would have planned for an earlier start, and hope they do next year. We left Ukiah and headed toward Mendocino and the coast in the cool but comfortable morning air.

Overall, this ride has fewer "junk miles" than any ride I've done. Lots of rides, though beautiful, have sections of city streets, traffic lights, broken glass and stickers, or high traffic. This ride was 99.9% unreal. The whole thing takes place in an unreal landscape. There are sweeping vistas, old-growth redwoods, wildflowers and wonderful aromas the whole way.

The ride is tough. I don't recall a flat spot the whole day. We either went up, or down. The ride starts with a tough climb, but having fresh legs makes it fun. The same hill, but a different route on the way back seems like it will never end, even though there aren't any steep spots, just a relentless 6% grade for miles.

If there was a downside to the route, it might be the road surface. A lot of the way the road is in ill repair, potholed and rough. In some spots it's merely gravel.
Oddly, it didn't bother me much. I think my magic Roubaix and the fact that I took my descents cautiously made my day less painful. I'd hate to try to get max speed on some of the surfaces we rode.

The feeling of an otherwise wonderful day was somewhat darkened by two crashes. On rider crashed right by LanceOldStrong. It appeared something happened to his bike. He was airlifted out. We saw another rider being loaded on an ambulance later in the day. I'd sure like to find out how they are, and what happened.

This was the organization's first effort, and they did a fine job. Lox and bagels at one rest stop, tri-tip at the post-ride meal. They marked the route well, and were just nice people. Tricia and I both won raffle prizes (Wine and a bottle of local apple brandy!)

My camera got a smudge on the lens part way through, so most of my photos have a weird dream-like look. I guess that makes sense for a ride with so many "tobacco accessory" shops downtown.

There's even a music a video! 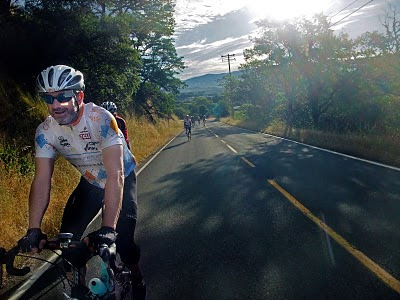 Things I failed to post: (I've been a bum and haven't kept this up.)

Diablo Summit:
Fun ride up Diablo with Tricia, LanceOldStrong and Steve.
I think it's because I had camera issues and hate to post without art. But Steve provided me with a Diablo photo. (Thanks!)

I started with LanceOldStrong George P and Dante at 4am. I managed to hang on their hammer-fest until stop one, where I didn't stop. I rolled and they caught me again, and again I couldn't hang on. I rolled the second stop, just for water. I didn't dismount the bike until mile 95.
My goal was to minimize stop time, and I did. I was stopped altogether less than an hour, allowing me to finish at 15 hours 7 minutes. I got in a hair after 7 in the daylight.
A few thoughts:
I averaged only 14.1 moving speed. Weak. I was faster last year in the heat. Heck, I was 15.1 at Hemet, and 14.9 at Davis in the amazing heat of 08. So I was a slow rider this year.
But...
I turned in my best overall time and speed: 15:07 hours. as opposed to 16:37 last year. That's a huge difference! My overall average speed, counting stops, went to 13.3 mph.
15:07 total hours, and a moving time of 14:15 means I wasn't moving only 52 minutes of the ride.

Now I'm trying to figure out how to approach this ride in the future. Go faster and rest more, or carry on with minimal stops.
I know, I should HTFU and do both. Like that's possible. 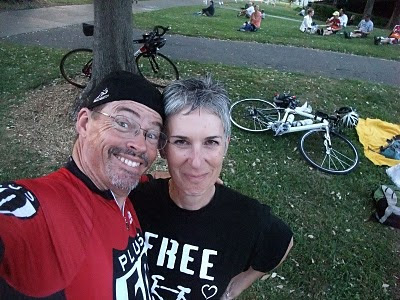