Almond Blossom Century and a crash 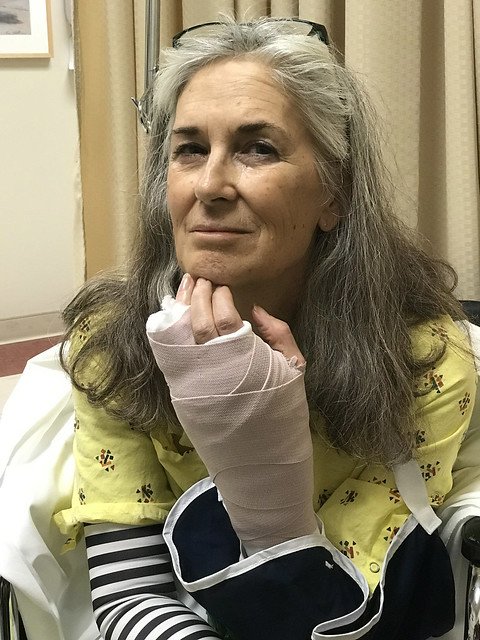 How do you talk or write about a crash? Everyone wants to know "Is she OK?" But what does that mean? There's such a wide range that includes "OK." So, is Tricia OK? Well, she's alive. And she should recover from her injuries. No bones were broken. So, considering the alternative, yeah, "OK" covers it. And if you aren't involved, if you don't know her, it may be a good enough answer. Do I insert that old "Injuries that happen to other people are minor. Injuries that happen to me aren't." line here?

If you're friend or family, OK is harder. She's hurt. Parts of left hand are unbelievably swollen.  There are colors involved that I hope to never see again. The ER doc wrapped it up in a lot of padding and such to protect it from bumps, which kind of works. Her ribs, though not broken, sure behave like they are. Laying on her side is impossible and trying to get out of bed is excruciating. She does it, but I almost cry watching her do it.

So, is she "OK?" Kinda sorta? It could have been worse. A lot worse. That's a good thing. But she still hurts and will be limited in what she does for... Well, we don't know. And pain, well, it's painful.

Tricia heard the Almond Blossom Century in Ripon was a benefit for music education, and that it was a metric century she signed us up. It's a super flat ride that seemed perfect for an early season tuneup. When the forecast was for rain she said "what the heck" and off we went, fenders attached to our road bikes and stuffed inside the Subaru.

While we didn't have a wet start, it was pretty darn windy. Plus, we had morning winds from the South as we rode South that changed to winds from the North when we turned to ride North.  Then the skies opened on us. But we were doing OK.

At mile 45, just as we crossed a bridge over the San Joaquin bad things happened.

We’ve replayed her crash over and over in our minds. Plus, my photojournalist background had me photograph her as she was doing her injury inventory right after we moved her off the road.

Here’s what we think occurred — see the  diagram at the end.

Just after the bridge there is a lot of room to the right of the fog line. It looks like a bike lane or break down lane. But then the rumble strip appears and quickly the road to the right of the rubble strip disappears so there you are off the road, which isn’t awful except the road lip is right there. We think Tricia get her wheel against that lip and that’s what caused her crash.

A kind fellow cyclist (Thanks Roger) who wasn't on the ride stopped his car and ended up giving Tricia a ride back to the start. I waited for SAG and brought the bikes back.

We went to the Kaiser Modesto ER where she was treated. X-rays showed no broken bones in her hand, elbow or ribs.


She has severe bruising along with minor cuts on her left hand. They splinted it. It’s the worst of her injuries, and will take some time to heal.

If you're reading this I bet you're a cyclist and what you want to know is: How's the bike? It seems OK. The bar ends and tape may need some attention, but I think she protected it with her body. I haven't given it a full going over yet.

I'm in the far reaches of the California Bay Area where really cold is 40 degrees. Sure, it sometimes gets close to freezing, or even freezing, but it's usually really dry.

I've been riding the same commute for many, many years. For the first time a short wooden bridge I ride over all the time had ice. Invisible ice, which is still as slippery as regular old visible ice. It was cold and wet, but the roads just had puddles.

I turned onto the bridge, and still in the process of turning had my front wheel slide out from under me. Not slowly, just boom.

I got away with a bunch of pain and bruises. And my ever so nice Showers Pass jacket can no longer be worn to formal events.

But there's no climate change, right?

Posted by Curtis Corlew at 8:57 PM No comments: