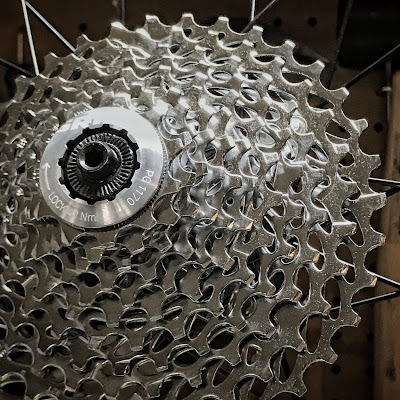 When we last left our hero he (meaning me) was lamenting the lack of clearance for the Specialized Pathfinder Pros 47mm tires on the back end  of his gravel/commuter bike , whining in general, and wondering what to do.

The front tire fit, so even though I'd have a mismatched pair I ordered a Soma Cazadero in 42 hoping it would fit. It appears to. Yea! And now I have a backup front tire (like that's something I need.)

I also bought an 11-36 cassette and a RoadLink. I've put the cassette on and am going to see if it will work without the RoadLink. Internet research is inconclusive.

I also bought a RedShift ShockStoop suspension stem because it was on sale, I had a weak moment and can't resist innerCaps in product names.

A lot of my testing will have to wait until Winter break as I use my bike in fully fendered glory every day for my commute.

Slowly things are happening, tough I don't know where it will all end. Maybe the whole project is silly and I should have just planned on using my old 90s Cannondale hardtail mountain bike with its triple chain ring and eight-speed drive train. But would that really have been as much fun and stress?
Posted by Curtis Corlew at 8:54 AM No comments: