When LanceOldStrong called to say he had Friday off and ask if I was up for a metric I said "you bet."
As always his routes are top shelf. Even if I know about where we're headed, he always manages to toss in a few interesting twists. This ride started in Concord, went through Danville, popped over to Castro Valley up Redwood road, through Canyon. The redwoods in Canyon are magnificent, and it always feels like a magical place. On a ride a while ago as we rode out of Canyon and into Moraga LanceOldStrong remarked "We're not in the Shire any more." Since then I always think of Canyon as "Hobbit Land."

Our 63 mile jaunt was foggy, cold, fun and generally uneventful until we got back to walnut Creek, where a motorized bicycle passed us on Olympic Blvd. LanceOldStrong, being LanceOldStrong couldn't stand it and had to chase him down, then blow him away. Though he then made a total Cat 6 move by turning right. Sure, it was really our route, but still...

Anyway, what a pleasant way to wrap up the year. It's almost time to compute year end mileages, and set next years goals!

Posted by Curtis Corlew at 7:50 PM No comments: 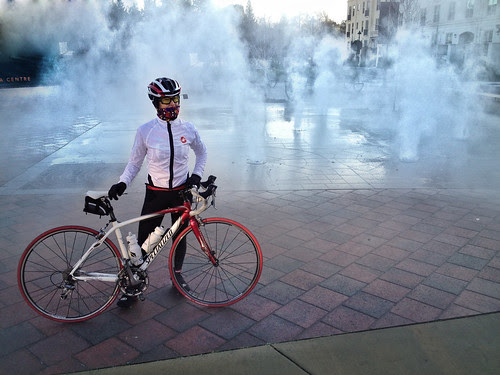 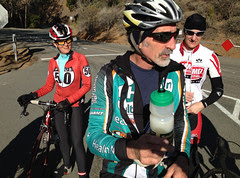 Man, I'm glad I went on this ride. I'd say I was toast, but toast is warm. It was around 34 degrees at the start. I only made the junction, and even though it was supposed to be to the summit, when I got there I felt as beat as if I'd gone to the top. Tricia (MyLilPony) made me promise to go up new years day. How much training can one do in a week? We'll see.


It was still great to ride with the BF gang and have our old friend Pete show up on his single speed at the junction, and to ride with Dan (below) who hammered out his twentieth ride to the summit for 2011. Yikes!

The mist photos are from a fountain at Pleasant Hill BART, where the ride started, that tosses up vapor on cold days. 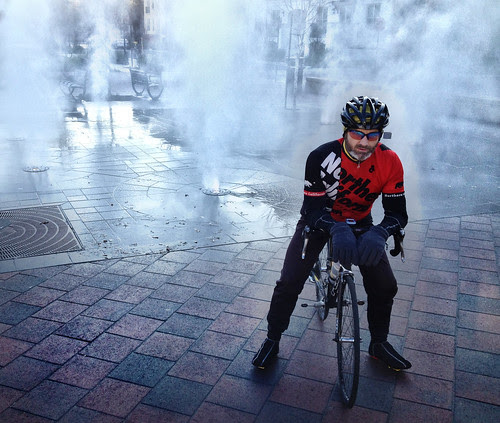 Photo note: I traded in my no-internet, no-texting phone when it broke and got an iPhone 4S. I've been enjoying the camera, and used it on this ride.
Posted by Curtis Corlew at 8:17 PM No comments: 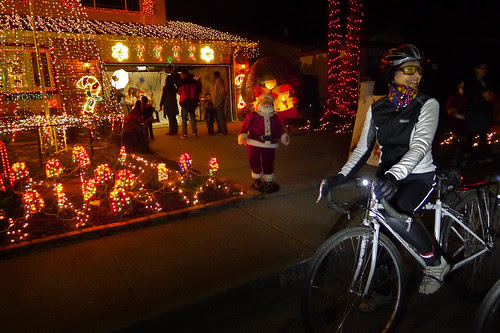 When my bike forum friends call for an 8am ride, we leave at 8am. When the Pedalers, bless their hearts, call for a 5pm ride, they mean they'll show up and start getting their bikes ready some time around 5:20. And they're proud of it too! They told me they aren't all uptight, and it isn't a job, it's supposed to be fun. 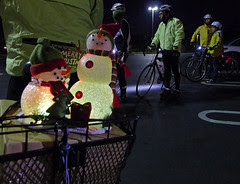 Eventually some riders with decorated bikes turned on their lights and sometime about 5:30 we launched our ride through the neighborhoods of Antioch, checking out the Christmas lights. I was really cold, but only because it was a slow ride with a lot of stops to gawk. I'd brilliantly brought a thermos of Starbucks hot coco, so Tricia and I had a bit of a warmer upper.

The ride was fun. There are a few over-the-top houses that make it all worthwhile. Imagine, FM radio transmitters broadcasting Christmas music, and a zillion lights. There was a two-story inflatable elf with a clear stomach containing Santa and another elf (I never figured that one out) and a house with a Santa photo studio in the garage.

We rode about a bit with our blinky-flashers competing and losing to the Simpson Santa and the part-of-the-decoration large screen TV playing a Christmas video.

Our hearts were warm, but our bodies were freezing. We rode home as fast as we could to generate a bit of warmth, and by the time we got back we were feeling pretty good. 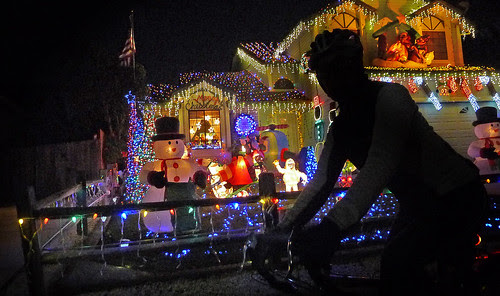 Posted by Curtis Corlew at 5:35 PM No comments: