If #imogenecunningham had been a cycling enthusiast. #f64group #cambriapineslodge
A post shared by curtis corlew (@cccorlew) on Feb 25, 2018 at 7:36am PST

Posted by Curtis Corlew at 9:08 AM No comments:

Cambria with hill and headwind

Our good friend Glenn (at least he was...) suggested the during our trip to Cambria we ride up Santa Rosa Creek road. It was beautiful, and away from auto traffic. But Glenn failed to mention that there are sections over 20%. Holy smokes. It was so uphill that in spots I didn't think I could get another pedal crank in. But Tricia and I made it, and it was wonderful. 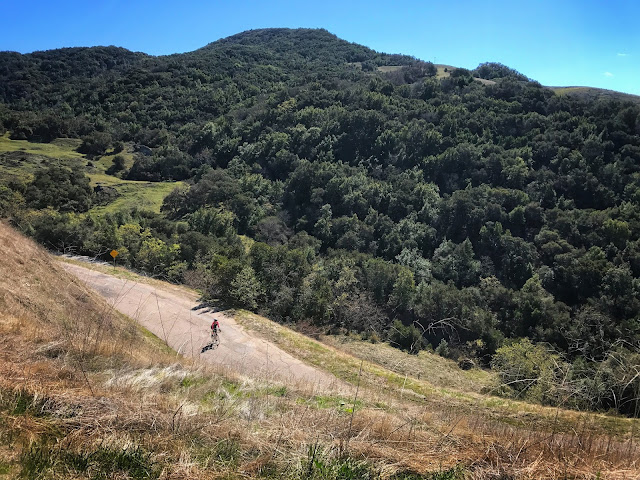 I'm about 50 yards ahead of Tricia, and look how far below me she is.

That little sliver of blue on the left is the ocean!

The downhill afterward was wonderful. We ended up in descending into Cayucos and looked forward to riding up Highway 1 along the ocean back to Camberia. Alas, there was a huge headwind that made our 14 mile-ish ride back take forever. Maybe even longer. But at least it was cold as well.

For me, one exciting feature is that I made my Strava Climbing Challenge or 7500 meters.  Yep, a website made up a random number and then awarded me pixels Yet I'm thrilled. Pavlov in action I guess. 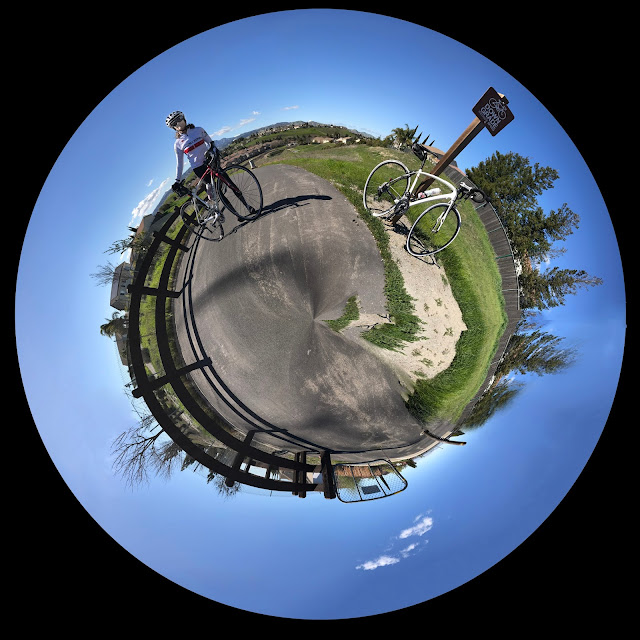 I gave my  photo class a panorama assignment, and just for fun we used them to make "tiny planets." I figured I should make one too, so here's Tricia on her own tiny planet.

Ad long as we're talking tiny, how about a bike lane so tine that the word "bike" doesn't fit. It's a "lan" Go Antioch!
Posted by Curtis Corlew at 7:59 AM No comments: 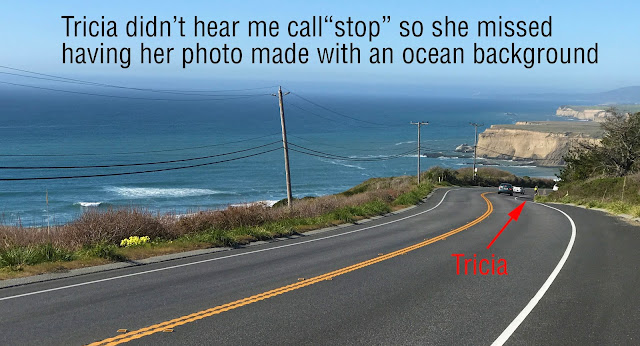 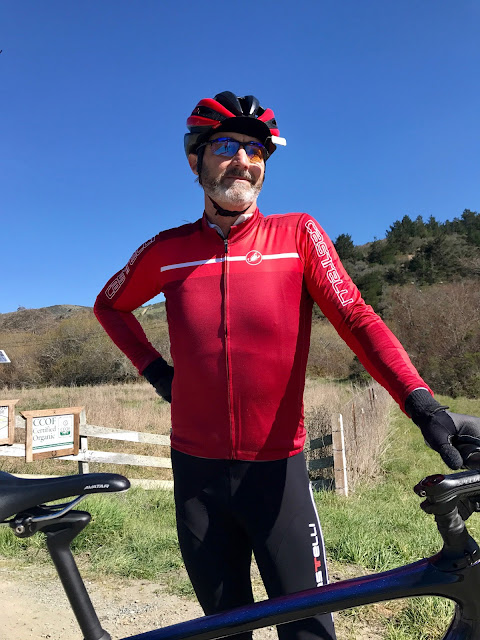 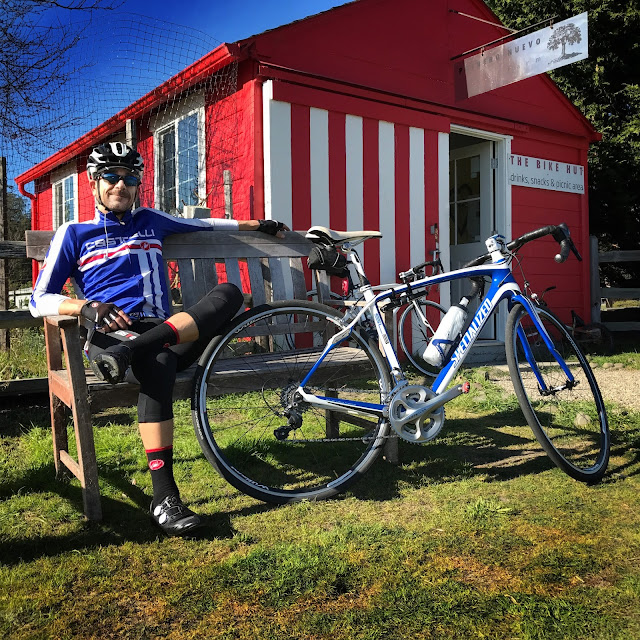 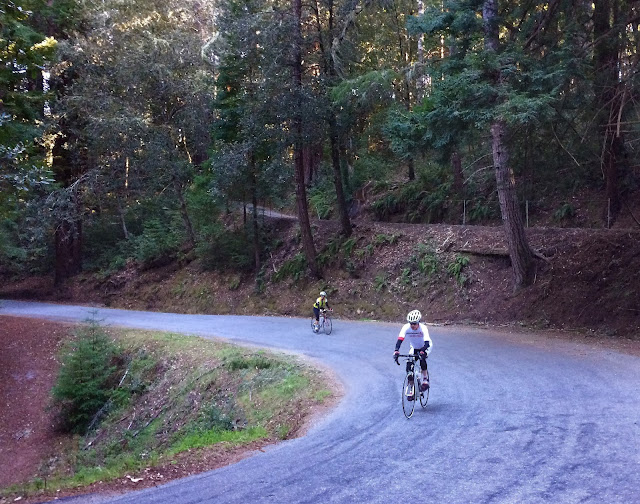 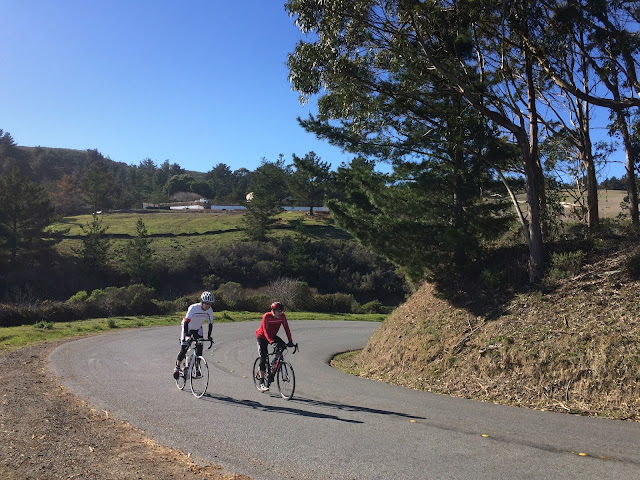 Mr. Lance Oldstrong sent me a text inviting me to climb Morgan Territory Road with him, Steve and Glenn. Then, after we climbed it, to turn around and climb back. Morgan Territory Road is a classic East Bay ride, but is generally done as a loop, climbing from the North side, descending the "plunge" and circling back through Danville or climbing Diablo.

Coming back over it is not unheard of, but not as much of a "thing." And there's a good reason. The road up is silly steep, and one lane. The descent is a really crappy road that you don't notice climbing, but really do on the way down.  On the plus side, at least it was also very windy and the sun disappeared behind the clouds.  Still, a delightful time was had, though I'm not completely sure why. Must have been the company.

My own bad self climbing the "wrong" side of Morgan Territory Road. Great day with 4800 feet of climbing and some cool dudes. Thanks @monroadie for the photo.
A post shared by curtis corlew (@cccorlew) on Feb 11, 2018 at 8:44pm PST

I wore my very-swell East Bay Regional Parks jersey because we'd be getting water at the Morgan Territory Regional Preserve, an East Bay Parks site.

@lanceoldstrong and @monroadie at the top of Morgan Territory. Climbing occurred.
A post shared by curtis corlew (@cccorlew) on Feb 11, 2018 at 12:21pm PST


I'm a member of a Facebook group — Look at my bike leaning on stuff — where recently someone asked for photos of the car your bike leans on. I managed to stop on the way to this ride to shoot this. Yep. That's a car photo on my bike blog. At least there's a bike too.

Heading out for today's ride. Going around that bump in the background. #specialized #roubaix #subaru #impreza #mtdiablo
A post shared by curtis corlew (@cccorlew) on Feb 11, 2018 at 8:55am PST

Posted by Curtis Corlew at 8:11 AM No comments:

Great ride except for one jerk

Tricia and I had a wonderful ride up Pig Farm and out the Three Bears. We had great weather and a delightful day. We even discovered a new-to-us bike shop with a great jersey and swell folks in Pleasant Hill: Frame Up Bikes.

But there was a pimple on the day: A jerkwad driver near the Lafayette BART station who apparently doesn't need to yield on his right turns. At least Tricia was on it and managed to swing left. Didn't bother him at all. He did at least pause long enough to respond to Tricia's shout of "You're supposed to yield!" with a loud "F*#K off." For those keeping score at home, that's black Jeep Grand Cherokee plate 6 SQY 228.


I found a cool new to me bike shop in Pleasant Hill. Frame Up Bikes. I love their Capo kit, and they seem like really nice folks #frameupbikes
A post shared by curtis corlew (@cccorlew) on Feb 4, 2018 at 1:41pm PST