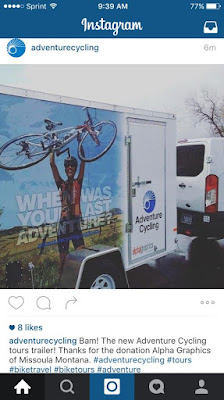 As I surfed my Instagram feed I came across this photo in Adventure Cycling's feed. It's their new trailer, which is nice, but who is that a photo of? Why, it's Tricia! I remember shooting that when she got her Ruby. That's Mt. Diablo in the background.

I've told Adventure Cycling that they can use my photos. They're an organization that does a lot of bike advocacy as well as run tours that we've participated in. But I wish they'd told me about this cool use.

Apparently it will be in the Bay Area for some reason in  October. If we can, we'll go check it out and post a few photos. In the meantime, keep your eyes peeled and report any sightings in the wild. 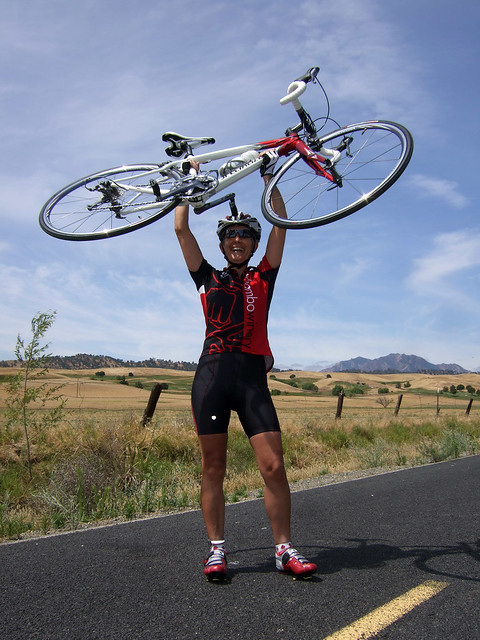 Tricia climbing Altamont Pass with the Livermore Valley below her. #primaveracentury
A photo posted by curtis corlew (@cccorlew) on Apr 17, 2016 at 4:42pm PDT


What a difference a week makes. Last Saturday's Cinderella Classic poured on Tricia. A week and a day later it was beautiful, and even warm for the Fremont Freewheelers Primavera Century. We ride a lot, and bike commute daily, but haven't ridden a century for quite a while. But we have summer plans, and figured we'd better see if we can actually still ride. We're still amused that the bump before Calaveras Road is called "The Wall." It's a bump, and a grunt, but The Wall? Really?


I'm pleased to report we still roll, maybe a bit slower than many, but we can indeed finish a century, even with an odd bike issue or two. It seems Tricia's rear wheel bearings started to die on this ride. They worked well enough for her to finish after a little rest stop love from Livermore Cyclery support. But new wheel innards are in order.


Usually giant turning windmills on a bike ride are a bad thing, but Sunday's #primaveracentury wasn't too bad, much to my great delight. Even Altamont Pass wasn't as brutal as it sometimes is.
A photo posted by curtis corlew (@cccorlew) on Apr 18, 2016 at 8:35pm PDT


Kudos to the Freewheelers for providing clothing shuttle back from the rest stops,  great on the route support, cool goodie bags, and a wonderful food truck post-ride meal. I also appreciated being able to download their RidewithGPS.com route map with turn by turn directions. With a little help from Lance Oldstrong I was able to download it to my Garmin 520 and get on-the-handlebar directions. We didn't need the paper route sheet once. We are living in an age of miracles and wonder indeed.
We also liked their "distance to the top" signs on the Palomares  climb. They didn't make the climb shorter or easier, but did confirm that we were moving and getting closer.

Tricia and I haven't ridden any organized rides in a while. When we started cycling seriously we liked the feeling of safety we got surrounded by other cyclists, as well as support in case of a problem, and the fact someone else figured out the route. Now we're not as sure about the safe part. We are regularly appalled by our cyclist brethren who, though they may be strong, ride without bike handling skills, common sense, or much curtesy. Between them and the cars sometimes we think we'd be better off riding with just a few friends, or alone.

Bonus hotel carpet photo. Because I have a series of these and can't stop shooting them.

Cinderella Classic from the sidelines 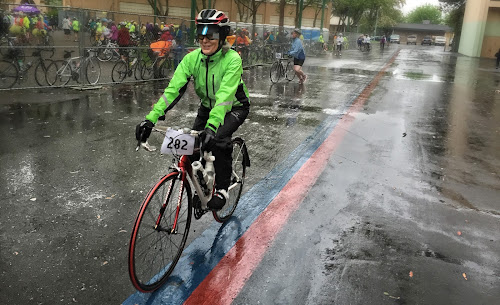 Tricia rode the Cinderella Classic in her new very nice ride jersey, but no one could tell as she covered it with her rain jacket all day long. It was either raining or raining hard the entire ride. It poured enough that many riders didn't show, and a lot that did didn't finish. She's says she often found herself riding alone, wondering if she was off course.

I'd planned to do my own ride as she rode the women-only event, but, well, rain. My excuse is that I didn't have rain pants, I didn't want to devote my Sunday to bike cleaning, I wasn't going to get paid, and she's just tougher than I am. I spent the day doing pretty much nothing while she was out on the road.

We didn't know they had a podium set up for fun photos or I'd have shot her covered in grime with her bike before she cleaned up. Instead I got this. 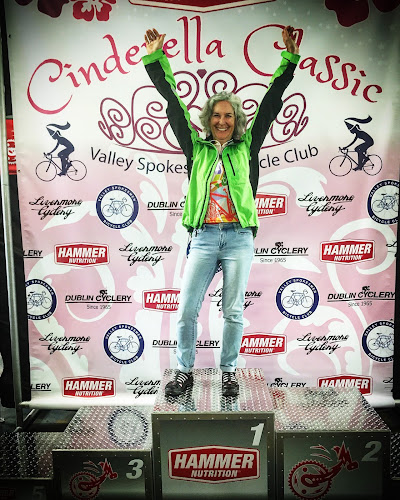 Considering the weather she still looked pretty good when she rolled in at the finish. Maybe she's smiling because the ride is over. What's that on her glasses? That's just weakness leaving her body and pooling on her equipment. 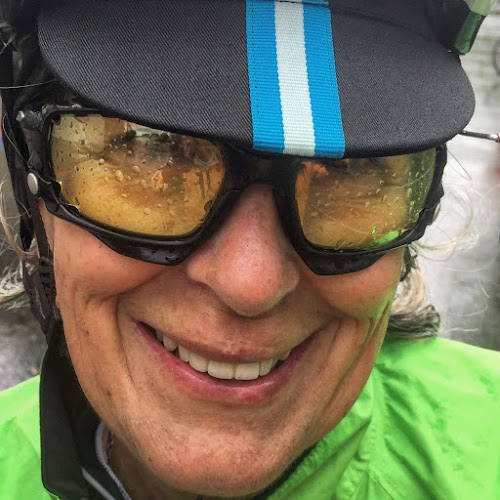 Posted by Curtis Corlew at 9:53 AM No comments: