Here's Michael helping me celebrate a successful #30daysofbiking in April. I can hardly wait until he's doing his own rides.

We always aim for 30 days of biking and usually make it, even if it's just a short ride to the store for milk. This year I did actual rides every day. Michael is holding Tricia's spoke card to help celebrate. I myself am not cool enough for such a card, yet I still rode every day.
Posted by Curtis Corlew at 8:48 PM No comments:

We managed to get in a nice ride along the East Bay Regional Parks Carquinez Regional Shoreline (say that in one breath...)

Tricia wore her newest jersey from the Primavera Century. I made her stop long enough to photograph her with the Carquinez Bridge peeking out in the background.
Posted by Curtis Corlew at 9:26 AM No comments:

Tricia looks better than I felt at the end our our 100 mile Primavera Century. But then she always does.

We had to leave the house at 5 a.m. which is a tough thing to do. But the ride was an hour away and we didn't want to hotel it, so that's what we did.  Once we arrive at events like this I'm always amazed how long it takes to sign in, suit up and get rolling. I should know by now... This time it took almost an hour, but we were able to get out just as the ride officially stared at 7.

This is one well run ride. Along with rest rest stops and markings it had wonderful signs in several spots. My favorite: One letting me know that I was was 1/2 mile from the summit of a tough climb.

The organizers somehow had enough political juice to get the currently-closed Calavaras Road open for the ride. No cars! And what a beautiful part of California it is. Such a deal.

At lunch we elected to add on the extra miles a get a full century. There was some real climbing, but the hills were so beautiful and auto traffic so light it was worth it. Plus riding past the windmills and thinking of Don Quixote is always fun. They're sooooo big!

The last climb at mile 90 or so would always be entertaining with it's 13% section, but coming when it does makes it even more interesting. Tricia and I may be slow, but at least we didn't walk it as we saw a number of (younger!) cyclists doing.

All in all it was a great day with only one oddity: I'd planned to wear my new Davis club kit and be a matchy-matchy with Tricia and thought I had until mile 85 when she said "I thought you were wearing your Davis jersey." Somehow the night before I'd set out an old Waves to Wine jersey with the same white/blue/orange color scheme and we'd both not even noticed until the late afternoon. Great job visual education teacher. 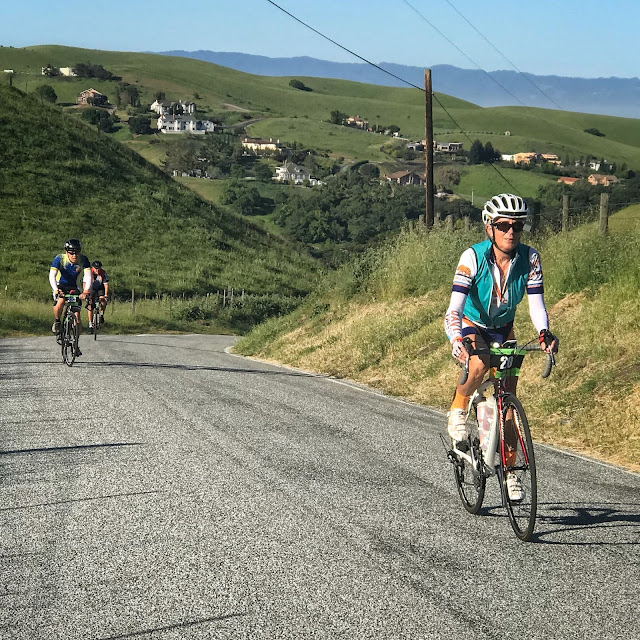 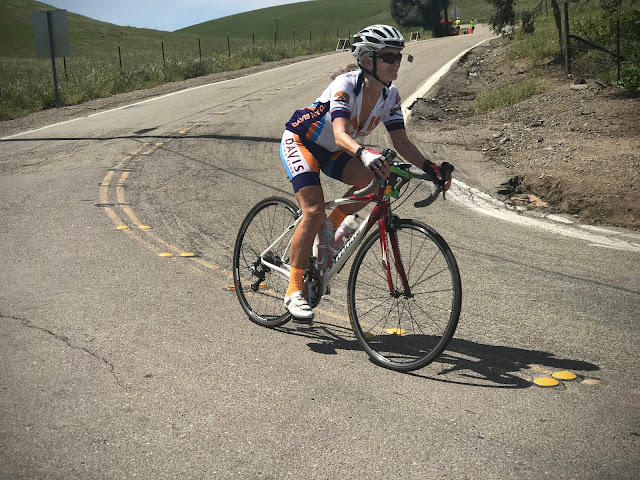 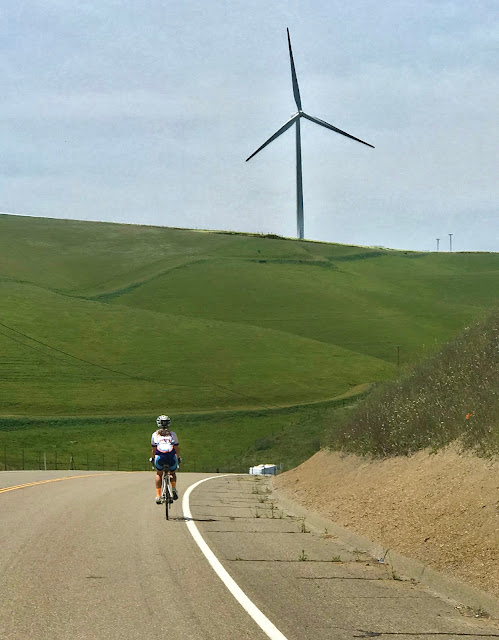 Posted by Curtis Corlew at 10:53 AM No comments:

We woke up the morning of the 2018 Party Pardee ride to see a dark windy morning with rain.  Tricia looked at me and said "I didn't sleep well, I think I'm getting a cold, and my stomach doesn't feel good. Let's go!"

So we drove to Ione to start our 100K in the rain. We wore our most geeky bike clothes with rain pants and rain jackets and even super-bright booties Monroadie gave us. We rode under dark skies and through puddles. Check the thirty-second long video.


Could we possibly look any more geeky? (Do not answer) A wet start to the #PartyPardee ride.
A post shared by curtis corlew (@cccorlew) on Apr 8, 2018 at 9:18pm PDT

Eventually, much to my surprise, not only did the rain stop, but the clouds broke up and we finished with a sunny warm day.