We finely got Tricia's red Valentine's Day tires and Williams wheels on her Ruby. Darn does that bike look sharp. Even better than before. We unveiled it to the public at a birthday ride for Bikeforums's Big Boss Man.

The company was grand, but the weather was cold as all get out. I found myself wishing several times I'd bundled up a lot more. Still the wonderful vistas and lack of cars made it all OK. We ended up clocking in at about 54 miles, and finished at Dublin Cyclery. Check, the owner rode with us and was kind enough to let us change clothes in his closed shop.

I was lost the whole time. I'd never ridden here before, but I sure will again.

Posted by Curtis Corlew at 7:53 PM No comments:

In the dark, in the cold, I managed to reach 10,000 miles on my commuter bike this morning. As it turned from 9999.9 I was hoping it would read 10,000, but alas it rolled over to zero. Almost all those miles are commute miles, though there are a few utility and fun miles tossed in too. I also sometimes commute on my fixed gear bike, and even on my road bike, so this doesn't represent my total commuting miles. But still, it's a milestone. And a lot of riding in 8.19 mile chunks.
Today was the coldest day in a long while, and I wore more clothes than usual. My feet still haven't really warmed up.

Posted by Curtis Corlew at 9:42 AM No comments:

The day after Thanksgiving

Ron figured we all needed to work off Thanksgiving, so he planned a ride around Mt. Diablo via Morgan Territory, then up to the top. We didn't make the top, but managed the Junction at least. We're blaming three flats and a coffee stop for running short of daylight. LanceOldStrong and Steve joined Ron, Tricia and Taxi777 (aka Pete) and my own bad self for this ridiculous cold-fest. I really had no business attempting this as I've been busy gaining weight since my last double century, but I did it anyway.

We saw ice that looked like broken glass while climbing Morgan Territory. This mixed well with the cold sweat collecting around my glasses, creating a simultaneous too hot too cold sensory extravaganza.

It was worth it just to ride with friends, and have such wonderful autumn light.

Ron did a good writeup with photos on his site (Danger, annoying autoplay music.)

Pete did his usual crack-up job with his report too, so there's no reason for me to go hyper redundant here, except to post a few photos. Here's a small set on Flickr.

Photos of Tricia by Curtis on Adventuring Cycling site

It's good to be loved. Adventure Cycling has a bunch of photos by me of Tricia on their web site. Right now Tricia is even on their home page. They have good taste, don't you think? Check out their Cycle Montana page and Great Lakes Relaxed page. Heck, sign up for a tour while you're there. These folks are wonderful. Here's a link to a five-photo slide show of them.

And just in case that isn't enough fame (still no fortune) for us, Tricia was the subject of a story in the Contra Costa Times. 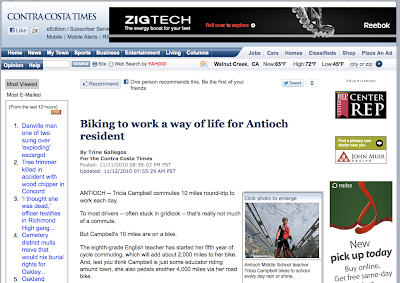 Posted by Curtis Corlew at 10:38 AM No comments: 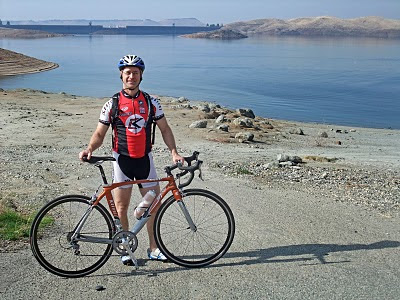 I raise a tire lever in salute to the indomitable Mr. Edwards! Ride on, sir!
Posted by Curtis Corlew at 10:01 AM 1 comment:

It was a dark and rainy day, then the wind kicked up.

Holy smokes, what a wet day. Saturday was grand, Monday was perfect, but the day of the Giro d' Vino was a mess. We must have changed our minds five times about driving an hour to greater Lodi to ride in the rain. In the end we thought "If it's really bad, we'll just go taste wine." 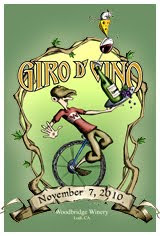 When we got there we weren't smart enough to stick with our plan. We put on our rain gear (such as it is) and jumped on our fenderless road bikes.

We had signed up for the 100K ride, but decided to just do the 50K version(about 30 miles) Somehow we ended up with 42 miles, which in the rain is a significant difference.
It was flat, but the wind kicked up and we found ourselves working to stay at 12 or 13 mph.

There were winery stops, which were fun. But we found we just cooled off and then got cold. We skipped the last few just to keep moving and try to stay warm.

Two days later and my ski-type gloves haven't dried out yet. My shoes haven't either. The rain jacket and pants worked well, but my booties seemed to be sponges. I still haven't figured out how to keep my hands and feet dry. If you have a hint, let me know.