Disclaimers:
I sometimes ride the commuter as a mountain bike, or on errands, so those miles are not strictly "going to work" miles.

I broke my Sigma computer part way through the year so I had to guess the odometer miles. I know I'm close, but I'm pretty sure I cheated myself out of a few.

Posted by Curtis Corlew at 3:18 PM No comments: 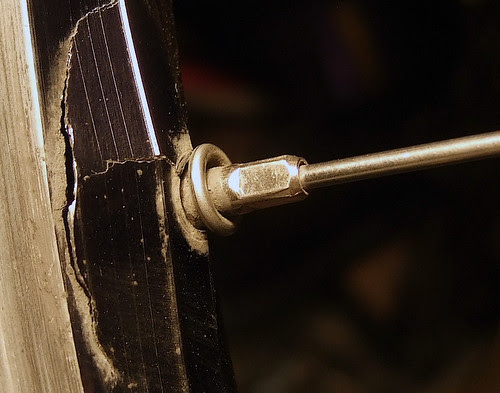 Maybe it's the lightweight Mavic 517 rim, or the number of curb cuts I ride over, or the weight of the junk I carry. Whatever the reason, I just noticed I'd actually broken the rim on my commuter bike. What a drag.

I had to decide on a new wheel or repair. I went with repair. I'm keeping the XT hub and having the Wheel Peddler build me a new wheel using a Macic 717 rim. I'll cost. I'm not sure I made the most cost effective choice, but I'm hoping it pays off by ending up with a wheel that is well made and will last forever.
Posted by Curtis Corlew at 9:58 AM No comments:

I'm so tired of fog 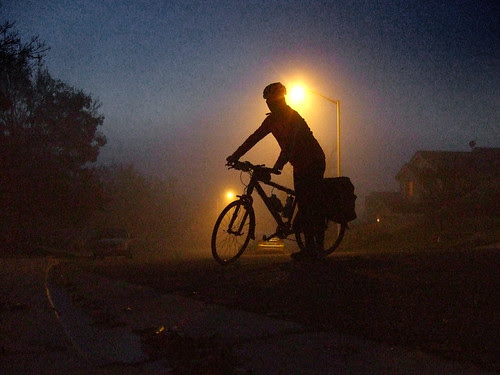 Here in Antioch, the Bay Area, but really on the delta near the edge of the valley, the fog won't stop. I'm not a huge fan of sub-40 riding, but I can do it. Toss in wet yucky fog and all the fun is gone.

Sea fog can be nice, it has texture. It comes and goes. It's sometimes playful.
The fog here is Stephen King style, dark and relentless, with no redeeming values.

Just to taunt us, it hangs in the low areas where we live, but leaves the peaks clear, just so we know what we're missing. Even a drive over Kirker Pass can reveal a sunny crisp sunglasses day before you descend back into the muck.

The dampness seeps into your clothes even more than rain. It collects on your glasses. It drips off your helmet. It makes you, even if you have a geek-style blinky light, invisible to the cars that seem to speed down the road beyond all reason.

In the "light" of the day, and I use the word light to mean "not pitch black" it's still a depressing gray of evil that looks like smoke, but without any warmth. In the dark it makes a hole in your heart.

Bring me rain. Or bring me sun. Bring me fluffy clouds. This has got to stop.
Posted by Curtis Corlew at 8:58 AM 1 comment: