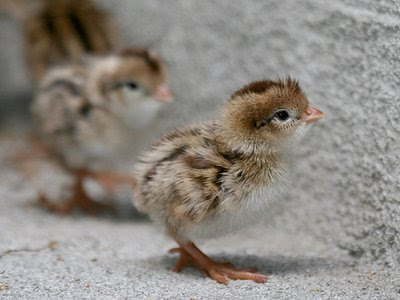 This isn't my photo, but these quail are about the size of the ones I saw. These may even be bigger.

There I am, rolling on my morning ride and feelin' pretty good when I see a van parked in the bike lane. I'm used to this, so I just roll on by. But as do, I get a glimpse of a woman with an almost-panicked expression on her face and I hear her yell something. I make a U-turn and roll back.

She is almost in tears and blubbering something that it takes me a moment to decipher. It seems that her worries are caused by a dozen of the most tiny California quail I have ever seen. They are barely big enough to be alive-- they're so small they'd be dwarfed by a ping-pong ball, even half a ping-pong ball. They're stuck in the gutter next to a tall curb, with no curb-cut in sight, frantically running back and forth as their mother tries to make them jump higher than they can. What can I do? I try to herd them so I can lift them over, but that's just silly. They are so fast.

I asked the woman if she had anything at all in her van, a poster, book, just anything at all. She came back with a child's jacket that I promptly threw in the gutter. It made a dandy little ramp.

I herded the quail over to it and up they went, quick as can be, and reunited with their frantic momma quail.

The woman was so happy, she kept apologizing for parking in the bike lane and for disturbing my ride.

I've had less interesting rides.
Posted by Curtis Corlew at 11:22 AM