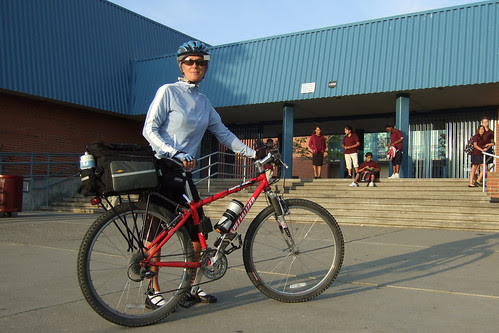 Tricia was just named Contra Costa County Bicycle Commuter of the Year by the East Bay Bicycle Coalition! I am so proud of her, and she's pretty stoked herself.

We'll be attending their awards ceremony on Bike to Work Day.
Here's what the EBBC posted on their site:

Tricia is a school teacher at Antioch Middle School and is also a dedicated bicycle commuter. She started about three years ago, commuting when the weather was nice. Now bicycling has become her default mode.

Rain, shine, wind or dark she pedals to and from school, taking her students’ papers for a ride through Antioch. Every day she exposes her 140-plus students to the possibilities of bicycling. She parks her bike in her classroom where her students can see it.

Tricia is aware that she is a cycling model for her students. She's careful to obey traffic laws and doesn't get on her bike without her helmet. She even makes a point of hanging her helmet on her bike's handlebars in the classroom. She uses bicycle safety articles in her informational reading lessons. She encourages and inspires her students and co-workers to give bicycle commuting a try.

According to Tricia’s husband, Curtis Corlew, she influenced him and some of his colleagues at Los Medanos Community College to begin bicycle commuting. In a community where riding a bicycle can mean you can't afford a car, or aren't allowed a drivers license, Tricia's commuting is working to change attitudes and perceptions through a positive example.

EBBC applauds the positive examples that Tricia and displays. We know that there are thousands more of you commuting every day. Please let it shine!
Posted by Curtis Corlew at 12:09 PM No comments: 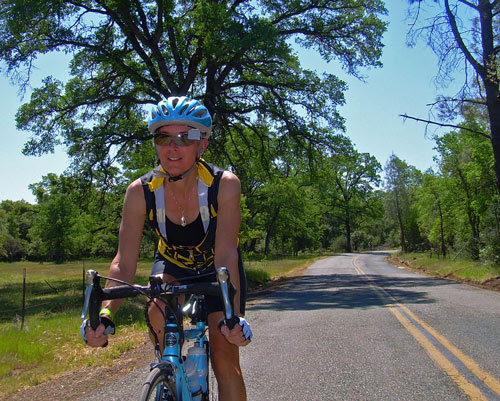 "We belong among the wild flowers, we belong somewhere we feel free."

What a beautiful day. Even though I always forget how far away Chico is the Wildflower Century was worth the drive.

We started at 5 AM, loading the bikes and grabbing the free breakfast the motel. We managed to actually get on the bikes on the road about 6:15. With the sun peeking over the horizon we and up headed out of Chico up our first climb, up the very very bumpy Humbolt Road. It's a demoralizing climb because it doesn't look like a climb. Tricia asked me if I'd lubed her chain with glue. But 700 vertical feet later we got to turn around and fly down Highway 32. A delightful 3.4 miles of smooth downhill with barely a turn.

A bit later we rode up Honey Run. I'd heard it was nice, but it is nicer than nice.

Depending on where you measure, it's about 1700 feet in 10 miles with a number of 11% and 12% sections. But it's all protected, out of the wind and shaded. The trees and plants smell wonderful, and the views off the edge are grand. It's a slow enough climb that you can read the road graffiti and fine out who in Chico loves who "4 ever."

After another smooth, delightful decent we hit the 100-mile add-on section: Table Mountain. It had become a good deal warmer, and the climb, though not as high, had steeper sections.
As we rode up there were numerous cyclists stopped, walking or just hiding in the shade. It was like in a war movie where the troops are marching past all the fallen soldiers on their way to battle. We refused to stop and peddled on.

From the top it was a winding, fast downhill over some potholes I glad I didn't hit at 30-plus.

The remainder was a pleasant roll through the crop lands of Chico. Pleasant until Tricia took a bee strike to the head. Somehow the little kamikaze managed to get under her shades and sting her on the side of her head. As always, she bounces back faster than I ever would, and we rolled on to the finish. I'd been hearing a Sierra Nevada Brew calling my name for the last 10 miles, so I was very happy happy to get back to the staging area and find that beer.

Our friend Joyce (Saint Joyce for the rest of the week) got us a shower at her friends house. MMMMMMMMMMMmmmmmmmm.
Posted by Curtis Corlew at 10:47 AM 1 comment: 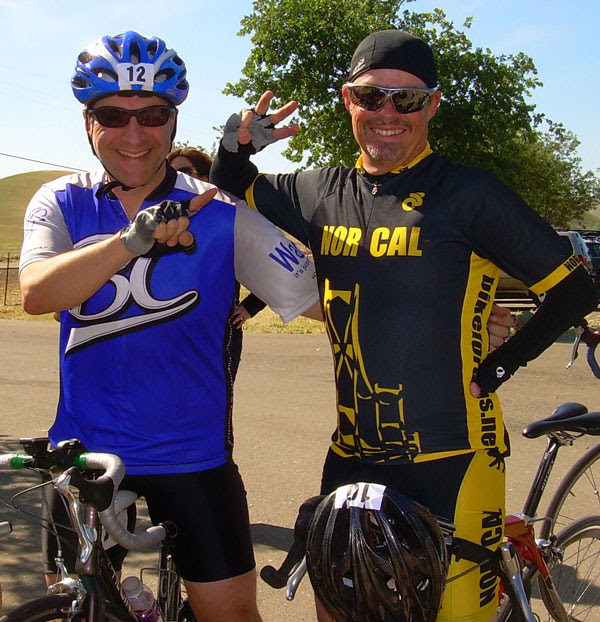 Diablo Scott and my own bad self.
I don't race. I don't time trial. But when Diablo Scott posted in Nor Cal Bikeforums.net that the Los Vaqueros Dam Time Trial wasn't drawing many riders I thought "What the heck" and decided to sign up. It's almost in my back yard. It was only fifteen bucks, and I got T-shirt and water bottle. I can live with that.

The course is only three miles long with 321 feet of climbing. It includes a nice steep 11.9% climb to the top of the dam at the end. I'd ridden there before and figured "How bad can it really get in three miles?" Actually not too bad. The most painful part is that my throat hurts from breathing so darn hard.

With the climb and all I was guessing I'd take fifteen minutes or so. But there was a tail wind, and I was pretty excited. I made it in 11.10. (Average speed-15.8) I wore my heart monitor and was surprised to see I was riding around 95% max most of the way, and at 100% for most of of the climb. In my age group of five Diablo Scott took first, and I came in third. I was fifth overall, but it was a very small field.

I had a good time. The folks running it were very nice, as were the other riders. I think this has potential to be a very popular yearly event for the non-racer crowd.
Posted by Curtis Corlew at 11:10 AM No comments:

Eighty-five percent of a century 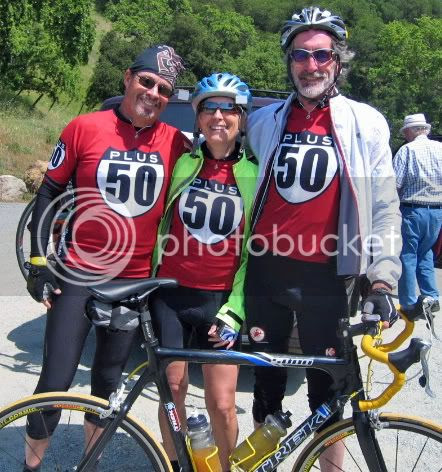 I might have guessed the Tierra Bella Century was going to be "special" when I:
None the less, at 7:35 we launched from Gavilan College with our Bikeforums.net friend Mr. Pete (Taxi777) into a cool morning and a mild headwind.

By the second rest stop the day was turning warmer and starting to feel hopeful.

Tricia and rode through Morgan Hill, did a short but steep climb and then dropped down Anderson Lake County Park. That's where the big climb of the day was going to start. Then...

Tricia threw her chain. She popped it back on and started uphill, and dropped it again. She executed a no-speed fall over, banged her knee tweaked her wrist a bit. When we flipped her bike over to try and figure out what was going on we realized she was missing three inner chain ring bolts on her triple. No wonder she was having problems. (Note to us: check those hard-to-see bolts)

We were now in a low spot, and either direction was a big climb. We did the sensible thing -Called SAG.

After much discussion of possibilities, the SAG drivers, who I swear were Bartells and James, the two goofy guys from the old ads, picked us up and gave us a scary ride. Cliffs on the left, cyclists on the right, two happy goofballs in the front.

They took us to the Sunshine Bicycle Shop in Morgan Hill. The great guys at the shop popped on new bolts and didn't even want to charge us.

We realized we weren't that far from the route, and tough Tricia decided we could just rejoin our ride, and so we did. We got to ride through a very beautiful section near Gilroy Hot Springs, surrounded by green, a river and some delightful rolling hills with a few climbs.

Coming back was another story. By the time we had 20 miles to go the wind had kicked in. We rode straight into a huge head wind that lowered our speed to 9 mph for miles. Then we turned and had it from the side. Twenty to twenty-five mph with gusts. I could actually see Tricia leaning into the wind to stay upright.

It was a relief to turn on the last leg and get all that as a tail wind. Zoom zoom zoom, and back we were. We ran into Mr. Pete and had a good post ride dinner (with pie and ice cream!) We ended up with 85 of our planned 100 miles.

I awarded Tricia a new jersey, purple heart, and new gloves in honor of her swellness and toughness. They do have about the best looking ride jersey I've seen, and Tricia will look extra swell in it.
Posted by Curtis Corlew at 8:33 AM No comments:

Check out this video about Davis, CA and bicycling. I could live in a city like this.
Update: The link is broken. I guess the video moved. If you know where I can link it please post the url in the reply.
Posted by Curtis Corlew at 11:37 AM No comments:

Email ThisBlogThis!Share to TwitterShare to FacebookShare to Pinterest
Labels: davis 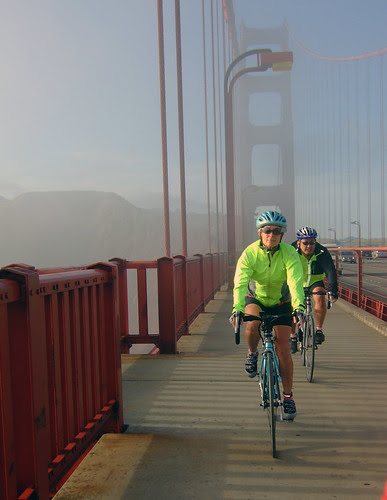 Mr. Pete lead the usual gang from Norcal Bikeforums.net on a ride Sunday, April 13. What an adventure. Tricia and I took BART to the City and met the crew at the clocktower at 10 AM. The weather was amazingly warm and we were able to head out over the Golden Gate without jackets, leg or arm warmers. 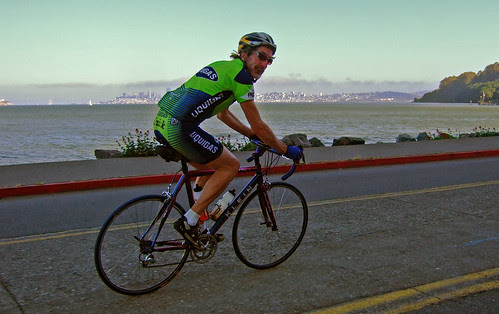 We rode through Sausalito to San Anselmo and on to lunch at Point Reyes Station, enjoying the great views and climbs all along the way. Pete took us through the secret roads of Ross, avoiding most of the heavily trafficked roads in the area. I thought he was just lost, but we ended up where we were supposed to.

The ride went well until sometime after lunch. We'd just gone through Samual P. Taylor State Park and were headed down narrow and annoyingly bumpy section of road. I was waiting for a car to pass so I could drop back and ride with Tricia. When I looked back I didn't see her, and she'd been right behind me just a moment before. I turned around and saw her bike laying by the road and went into a panic. I couldn't see her! I rolled up and still couldn't even see her. I can't think of the last time I was so scared. Then, there she was. Her handlebars had rotated suddenly when she hit a pot hole, tossing her forward and her cell phone into the road. She'd walked back to retrieve it. Pete had tool and her bars were quickly reset and we were all on our way again, like it had never happened, except for the remaining shaking in our hands and stomachs.

After that it was on to the Golden Gate, where the fog was rolling in (Jacket time!) and then through the City to Pete's. He rides there a lot and is comfortable. Tricia and I pretty much hated the whole city riding experience. I'm just glad we escaped intact.

All in all, a great day, 87 miles or so, plenty of climbing. 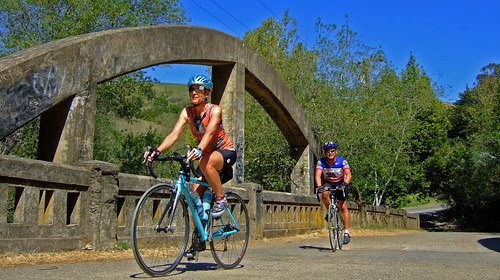 This video should be shown to all new cyclists, and maybe drivers as well. Sure, the voice over guy isn't exactly Hollywood, but the info is good. You just have to love YouTube, don't you?
Posted by Curtis Corlew at 9:41 AM 1 comment:

Yikes, yikes, and double yikes. I just sent off actual dollars to sign up for this ride. It's 200 miles, and it's hot. Unless it's cold. Unless it rains too. And it's a flippin' long way to ride in one single friggin' day. What am I doing here? If there are no posts after May 17 you'll be able to guess why.
Posted by Curtis Corlew at 7:19 PM 4 comments: