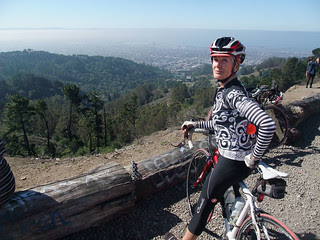 Posted by Curtis Corlew at 6:13 PM No comments: 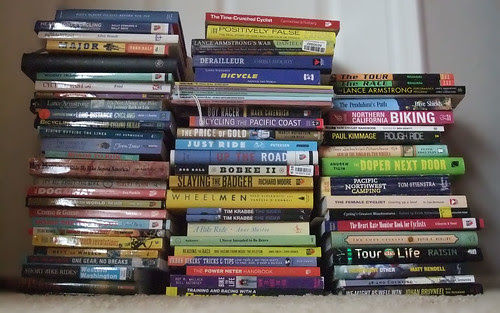 I buy books. There. I said it. I've been told the first step is admitting you have a problem. Yet I'm not sure it's a problem. It may just be a condition. Or simply a fact.

Not only do I buy them, but like many other people with special issues, I actively encourage others to follow in my footsteps. To that end, here are a few books of note from my ever-growing stack; My rainy-day blog post. 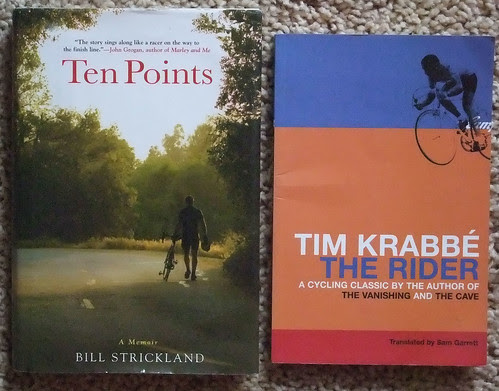 Best written: These books transcend cycling. They aren't cycling books but books about life that just happen to have a lot of cycling in them. Bill Strickland's Ten Points is heart breaking and sometimes a difficult and emotional experience. Still, it's wonderful writing and well worth the read. Tim Krabbe's The Rider is the story of one race and what happened in one rider's mind from start to finish. It was one of the first cycling books I read, and it's still my favorite. I thought I'd lost my copy and bought another so I could read it again. Of course, I later found it and now have two. Ask to borrow one. 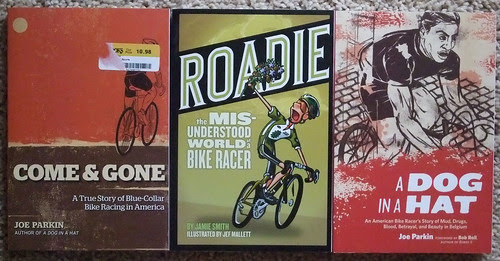 Insider info: These three books attempt to take slow non-racers like my own bad self to inside the peloton. I'd read great reviews of Roadie.  It's OK, but not great. Come and Gone, and Dog in a Hat by Joe Parkin are more interesting, but make me glad I never had the skills to even try and do what he did. Being a bike racer makes for a tough life. 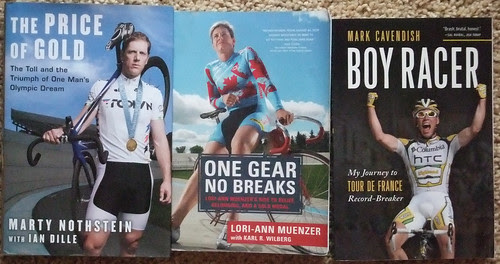 People I'm happy I don't have to deal with: It seems as if in order to be a champion one has to give up a lot, perhaps too much. These three books are autobiographies of people who have succeeded as cyclists, but oh my are they hard on the people around them. They may have the singular focus it takes to win bicycle races, but I am so happy they aren't my friends, lovers, parents, children or spouses. Their stories make interesting tales, but... yikes. In Boy Racer Mark Cavendish comes off as a cocky jerk who is not a good friend or teammate. And he wrote it himself! I've been had: Yes I have, but I'm not alone. These books are filled with lies by cheaters. And I believed them. I don't know which is the worst. The Lance Armstrong Performance Program book that leaves out EPO, or the Landis book that he wrote to defend himself after he lost his Tour victory to doping, only to later write another book saying this book was all lies. I'm keeping them to remind myself that having heroes is a childish fantasy and I need to be grown up. 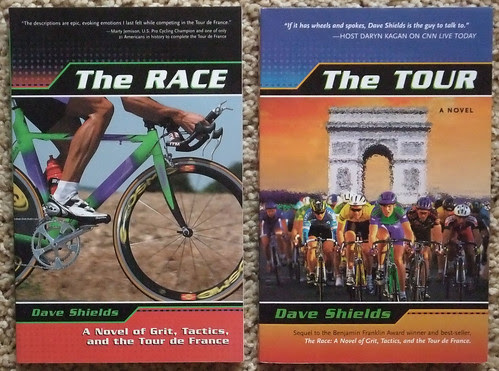 Guilty pleasures: These books by Dave Shields read like the juvenile sports fiction hero books from middle school. They are short on character development and pretty lightweight. Yet I enjoyed them anyway, in the same way I enjoy a good popcorn movie. Go ahead, hide them inside something that looks serious and read them. 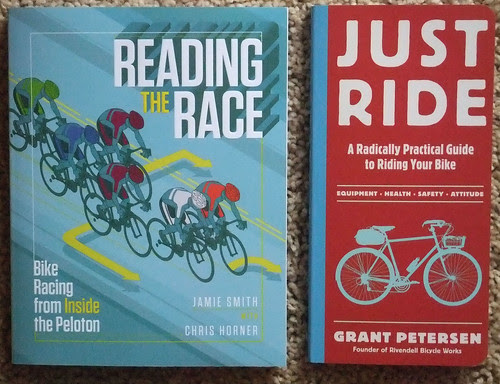 Recent interesting acquisitions: Reading the Race is a look at how bike racing in the US works. It's an amazing insight to what happens during races. I think this book is a winner for actual racers, as well as people like myself who wonder what's going on. It's filled with technical and tactical details. I enjoyed it quite a bit. But I'm still not going to race.

Grant Petersen's Just Ride is a grumpy but amusing "hey kid get off my lawn" rant about everything that he thinks is wrong with cycling culture. It's fun because I'm sure that, like me, you'll find yourself going back and forth between thinking "That's so true." and "WTF?" as you read it. It's really an unusual kind of book with a lot of different attitudes that contrast strongly with the usual cycling writing in most bicycling magazines.

It's still raining, so I may head off to Half Priced Books and see what new cycling books they have.

And if notice anything missing from my library that you think I should read, let me know!

If you liked this, check out my post on Cycling Science and Cyclepedia.
Posted by Curtis Corlew at 12:01 PM 2 comments:

They live, we sleep 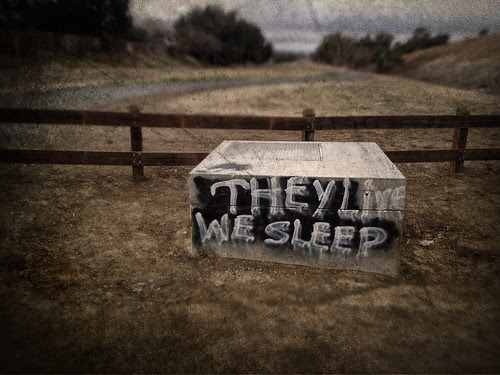 Behind my college on the bike trail I use on my daily commute there is a concrete box that attracts graffiti. I admit I rather enjoy some of the odd messages that have appeared. This one inspired my to get all photo-manipulatey™.
Posted by Curtis Corlew at 10:02 AM 1 comment: