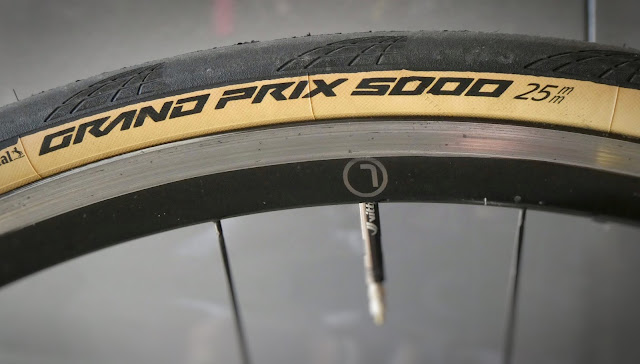 The weather has become nice enough now that I don't need old tires, suitable for the trainer, on my bike any more this year (Yea California!) I am ready for the outside world.

To that end I mounted a set of Continental Grand Prix 5000 tires with Victoria latex tubes on my Williams wheels.

Rumor has it that these are nice rolling tires. I have also read that latex tubes are more supple as well as lightweight. Much to my surprise, the rumors seem to be true. Whether it's the Grand Prix's or the latex tubes I don't know, and I'm not about to take it all apart to test it.But the ride seems much smoother and more free of vibration.

Sure, it could easily be the placebo effect. After all, who wants to spend money only to discover that it doesn't made a darn bit of difference. So I could just be convincing myself that the ride is smoother. But I don't think so. Then again, that's how these mind games work, right?

So, whether it's me faking myself out, or the tube/tire combination actually smoothing the road vibration, I'm feeling it. I could really tell on a recent downhill stretch of not-great roadway that my bike was rolling a lot more smoothly. Priceless.

Posted by Curtis Corlew at 4:21 PM No comments: 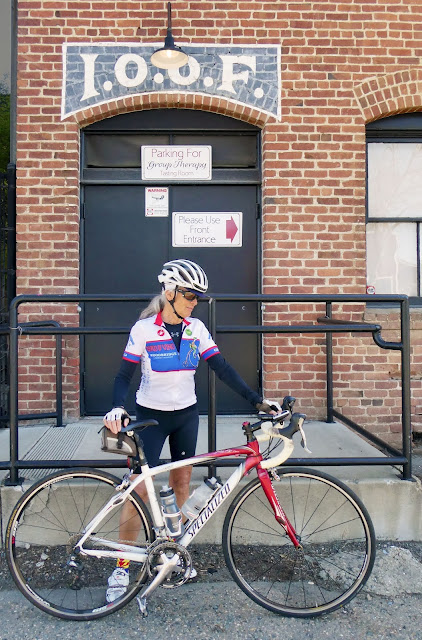 We had an actual full normal day! We started our Lake Comanche and Pardee Reservoir ride at the International Order of Odd Fellows hall in the small town of Clements, California. I have a new travel camera and warned Tricia that we'd be pausing regularly for me to play. with it. She didn't complain. 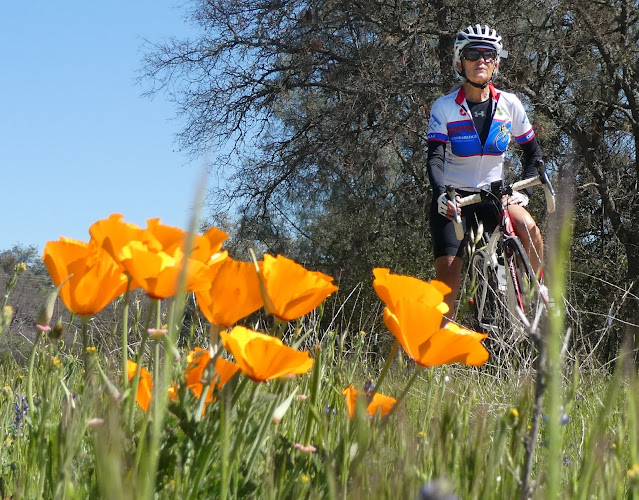 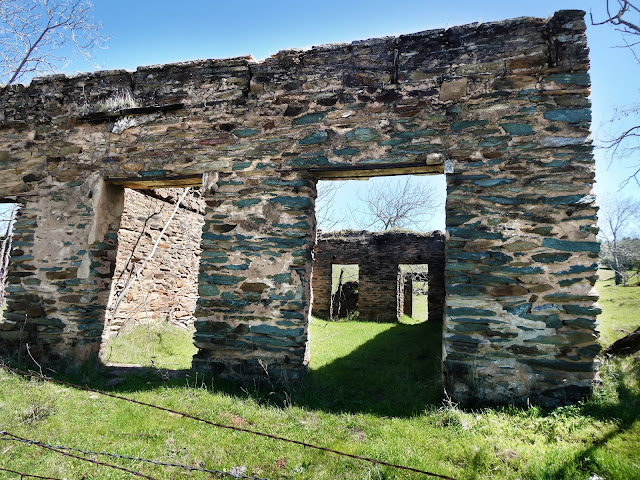 We managed to stop at Klinker Brick for wine, and our favorite Mexican restaurant for dinner. Life is good.

Posted by Curtis Corlew at 11:17 AM No comments: 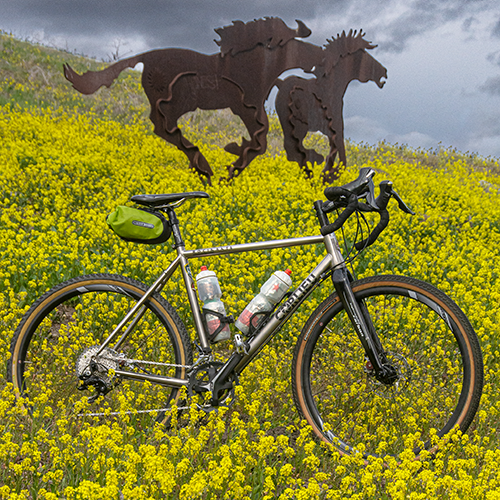 I blame (or maybe credit) Russ Roca of Path Less Pedaled and his “Cave of Bad Ideas” videos on his Youtube Channel.

I have plans to do a week-long ride on forest service roads along the Continental Divide. But I'm a roadie with a road bike, and also a bike commuter with a gravel-ish bike I turned into a commuter bike. Though my commuter bike was sold as a gravel bike, it was more marketing than function. But it did make a great commuter bike with a rack and panniers and lots of lights.

But COVID-19 put an end to commuting. It's all work from home now. So I converted my “commuter bike-gravel bike” to a useable gravel bike. 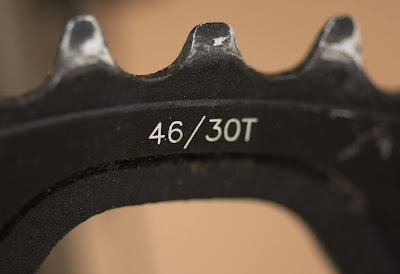 The first thing to go on my bike with the nice Ultra compact (50-32) crankset, replaced by an FSA 46-30 that’s a lot more realistic for me. Why this ratio isn't standard, or at least an option on all gravel bikes is a mystery. Maybe the rest of the world is just stronger than me, but I don't think that's it. 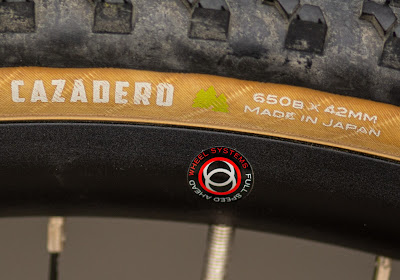 Russ is a fan of larger tires, and also 650 B wheels, particularly for shorter riders like myself. To that end I purchased a set of FSA 650 B wheels and a Soma Cazadaro 42mm tire for the rear with a Specialized Pathfinder 48mm for the front. (I’d actually purchased a set of Pathfinders only to discover that it I couldn’t fit a 48 on the back with reasonable clearance.) 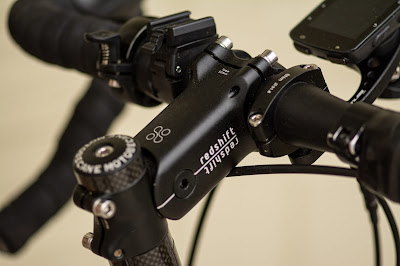 I followed that up with a Red Shift suspension stem, again recommended by You-Know-Who. It works, and I don't notice it's there. It doesn't bob at all, but seems to be helpful on big wacking bumps.

The gearing was still a bit tall for me. Unfortunately the bike industry doesn't seem to want to make derailers that will handle large cassettes and work with road-style brake shifters.

Again, it's Russ to the rescue. His Path Less Pedaled Cave of Bad Ideas YouTube channel reviewed a new derailer by a company named S Ride that magically works with Shimano Ultegra 11-speed brake-shifters and will handle huge cassettes. 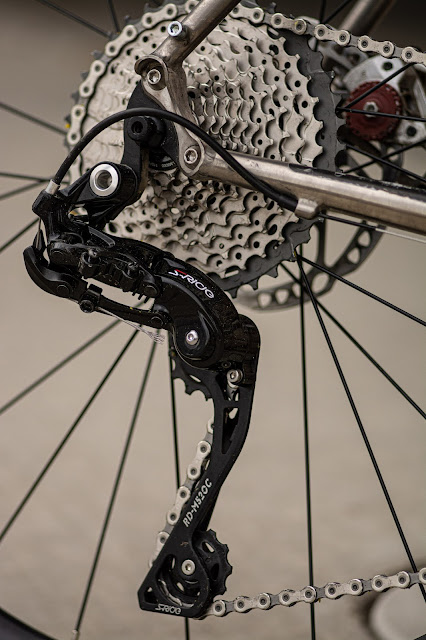 I ordered one, along with a Shimano 11-40 11-speed cassette and miraculously it actually works. And I like the shifting. It's a bit more effort to push the lever when the gears get really low, but the shifting is very crisp.

Now I have a bike that may be ready for serious gravel roads and some hills. As an old roadie this new thing feels a little odd ,and a little heavy, but what the heck. It works; it’s a bike, and let’s go!