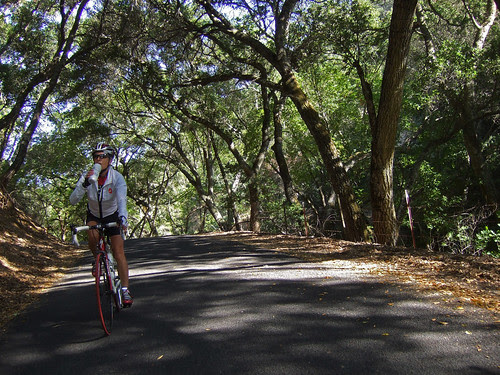 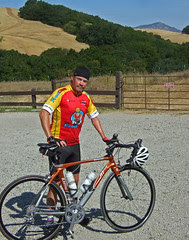 What a beautiful California Saturday. Tricia and I met Joyce at a Peets in Concord near Clayton and we rode Morgan Territory Road, then up the Diablo Southgate, down the North, and back to the cars. It was wonderful. Not too hot, not to cold, not too windy (though I could do with just a touch less during the screaming decent toward Livermore.)

They repaved the road a year or two ago and what a difference it makes. Whoever did that: Thanks!
. 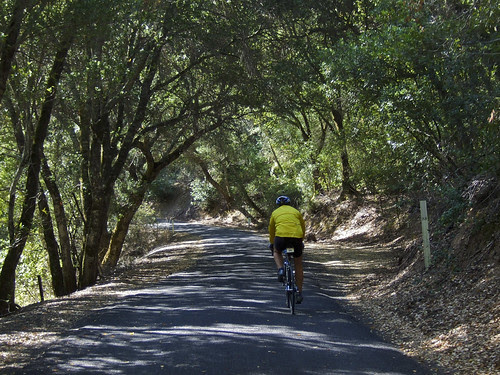 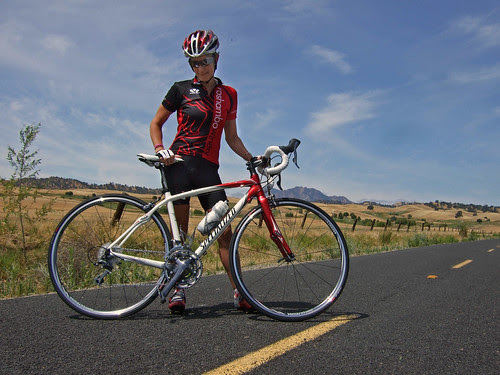 Really, it's all about Zertz. 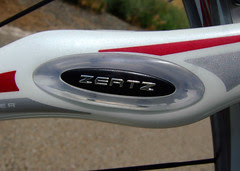 Zertz, of course, is the new miracle elasto polymer made with meteorite dust and the molecular essence of hybrid rubber plants grown in secret silos miles beneath the surface of the Earth.

While Zertz has shown potential for curing both Attention Deficit Disorder and warts, it also has applications in underwater welding and bowling ball construction. But where it really shines is in vibration absorption on really pretty bicycles (RPB.) It apparently can work it's magic on any bike, but does best on women specific red and white varieties.

Naturally, being of such high scientific and artistic sensitivity, this appealed to Tricia. Or maybe it was that she had a Ruby Red Giro Helmet and matching Sedi shoes already. It gets a bit fuzzy here for me. Anyway, she saved up her allowance from the local middle school, did some extra chores there, and the next thing I knew I was standing there saying stuff like "Of course you should buy yourself a new bike. With Zertz. It's not just on the frame you know, it's in the seat post too. You'd be crazy, double crazy, to not get it." and "White bar tape! White seat! What could be more practical than that!"

She often listens to my experienced wisdom when it comes to important matters like this, and she did this time too.

So, here we are, announcing the latest addition to the Tricia stable: Ruby.

I've been annoying Tricia by singing Ruby songs all day (Ruby, don't take your bike to town, Ruby Ruby, Ruby baby, etc...) And pointing out I don't have love handles, I have.... Zertz inserts. 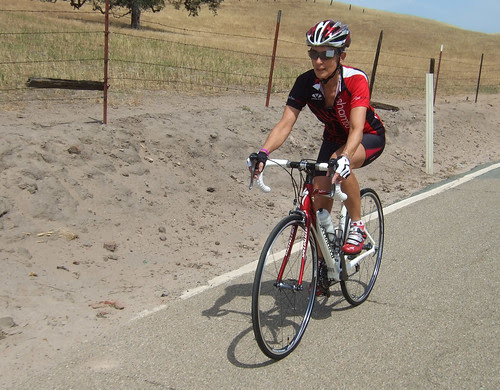 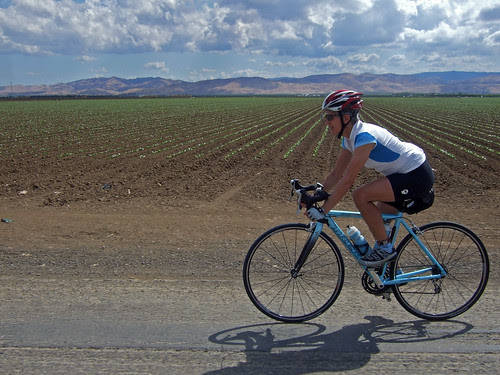 Tricia and I rode the Canyon Classic metric century (100K or 63 miles) back in 2007. We thought we'd try the classic 100 mile route this year. We're glad we did. The route was much more interesting and fun to ride, even though it clocked in at eight miles more than 100. 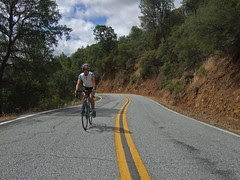 We started in Patterson and rode west toward the hills and Mt. Hamilton. We were rained on just a bit, but not much. The ride starts off with a lot of climbing, and spends a bunch of time in the plus-ten-percent range. Tricia enjoyed the constantly changing weather as we went from rain to overcast to cool to warm to pretty clouds and then looped through it all again.

After the climb there was a delightful decent to another long climb. But the stunning scenery let us hardly notice the work. I had no idea we could be so far away from the world yet so still close to the Bay Area. It was apparent why they called this the Canyon Classic as we rode along the sides of some very steep hills. There weren't many other riders on our route. Most of the time it seemed like they'd put on this ride just for us.

After lunch in Livermore we rode up Tesla Road and had an amazing decent back into Tracy. First it was steep, then, even as it dropped to only a few percent, we had a tail wind that let us cruise at 25 while hardly working. 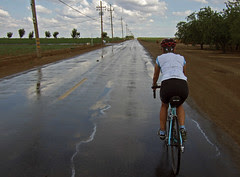 From there we rolled through long straight roads in very flat farm country. At about mile 85 we hit a section of road so wet it looked like the gods had dumped buckets on it. We didn't get rained on, but must have just missed a pretty impressive cloud burst. It was wet enough the bikes ended up looking like they'd spent the day in the rain. I'll have the joy of cleaning them up on Sunday.

Overall, a really nice ride. I just wish the tee shirts weren't white. They had an OK design, and I would have bought one, but do I really need another white tee I'll never wear? 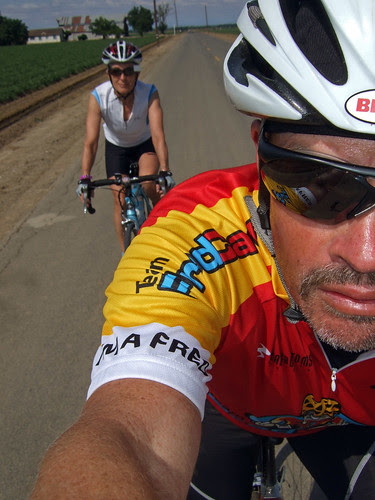 Posted by Curtis Corlew at 7:28 AM No comments: 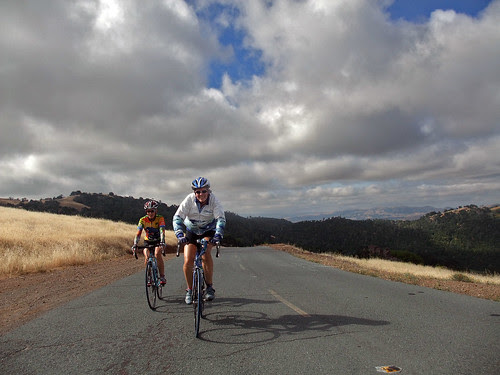 Tricia, Joyce and I took a pleasant ride on a beautiful day. We went up Diablo Northgate, down the South, around Blackhawk, over to Lafayette, Walnut Creek and Pleasant Hill. Fifty miles of enjoyable California beauty. Tricia and I followed up by cycling over to the Walnut Creek Art and Wine Festival.

We did have one interesting encounter. On our way though Pleasant Hill we were both passed unnecessarily closely by a rider in a full-tilt Cervello kit that matched his Cervelo bike. Then, even though he'd blown past, the gap never grew more than 100 feet. We caught him at a light, and he took off. I rode up next to him, mostly to check out the bike, and when he noticed me I could see him try to subtly drop the hammer. I just stayed next to him and said "Hi." He didn't respond, but he did try to burst away again, but couldn't. I could tell he was hating that some old guy was just riding next to him as he tried to show me how cool he was. Eventually he turned right where I turned left. All bike, no legs.
Posted by Curtis Corlew at 1:02 PM 2 comments:

Tricia and I took our bikes on BART to get close to the Maker Faire and ride the rest of the way.

Sometime after SF a guy got on and sat across from us. He was kind of heavy, not really super fat, but definitely large. He was dressed in blue collar work clothes, and boots.

He had a white Trek Madone with all Ultegra Ice components, super clean white bar tape and a white saddle. It had platform pedals. Everything looked brand new. No computer, pump, bag, scratches. The cassette was a clean as clean could be.

He explained it cost over $4000 and that he took it in every week to be tuned and have the tires filled (huh? tires filled? That's what he said!) and that he'd gone almost 40mph down some hill. I wondered why his bike looked to perfect if he'd actually been out on it. And yet he seemed to know a little. He mentioned that he thought DuraAce cost too much and Ultegra was darn near as good and close enough for him. He said he'd have on different pedals if he weren't just riding around town.

We all got off BART at the last stop. Tricia and I asked directions, waited for the restrooms then eventually got on the road. After about half a mile we see the guy. He's walking his bike along the sidewalk.

I jokingly called out "Shouldn't you be riding that thing?" and he looked up with a surprised expression, as if the idea had not occurred to him. He got on the bike and started riding. Tricia and I stopped for a moment to check a tire and he went by. That's the last we saw of him.

The whole thing seemed only slightly odd a the time, but after a while, and thinking about it, it started seeming odder and odder. What was this guys story?
Posted by Curtis Corlew at 5:28 PM 1 comment: