Morgan Territory: This is November? 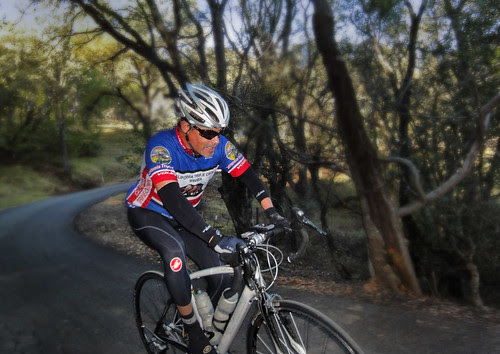 Sixty-eight miles in late November? Over Morgan Territory? That's just crazy talk. But Lance Oldstrong's plan to pilot Midland, Tricia and myself around the mountain had the blessing of the weather gods. Not only did it not rain, the sun was out and it wasn't even cold. Perhaps the 11:00 start from Oldstrong's new digs in Concord helped, but the weather was glorious. There wasn't even any ice at the "ice corner" where, even on not-so-cold days there is occasionally a sheet over a shaded puddle. 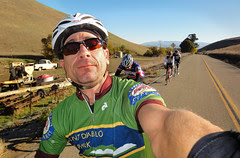 It's always fun watching Morgan Territory Road narrow as it climbs and turn into a secret back road suitable for a European road race. The ten-mile climb is somehow always just a bit longer than I think it will be, and I'm always glad to get through the two short steep sections.

We stopped for lunch in Livermore, which is always a mistake for me. It's so hard to get my engine warm after a break. The easy climb up Collier Canyon back toward Danville about did me in. I kept checking my heart rate monitor and seeing really high numbers as everyone pulled away from me. 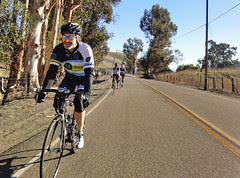 About the time we got to Danville I was getting worried about the light. The sun goes down about 4:50 and I was wondering if we'd make it back. Oldstrong assured me we would, and indeed we finished up right as the sun dipped.

I was toasted when we got back home, and figured I'd just relax until bedtime. Tricia, the tough one in the family, sat down and graded papers, staying at it long after I'd gone to sleep.

All photos by Midland (Steve) 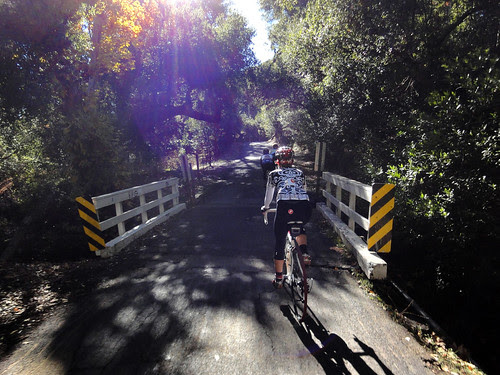 We've tried this ride in the wind. We've tried it in the fog. We've done it in the rain. All in all, we prefer the perfect weather we had for the Sunday 2012 version. The lack of any hill but a freeway overpass and the absence of even the slightest curve in the road makes the Giro d' Vino bit of an unusual ride for us,  but it's a delightful way to spend the day. 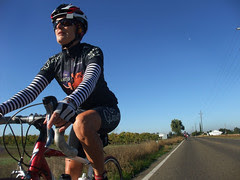 I kept telling myself, this isn't a bike ride, it's a wine tasting by bike. Indeed, the frequent stops on the 50 mile route meant that at the end we weren't a bit tired. That, and the six hours it took to finish, of which only 3:20 was spent moving. The organizers make arrangements to ferry any wine purchases back to the start, so spending too much money was really easy. We kept somewhat calm and bought only 11 bottles.

We were lucky enough to run into BikeForums.net friends Bikingsheare and MaroPolo who provided us with some good company and entertaining tales as we pedaled through the day.

All in all, an uneventful non-epic day. Just what we hoped for.

Of Bullets and Bicycles

What's the point of having a blog if you don't rant occasionally and make broad sweeping generalizations about the state of humanity? That's right, none.

I ride my bike. I ride a lot in Antioch California, where I live. It's a suburb. There's a lot of the usual crap on the road. I've complained on this blog before about amount of broken glass mixed in with the fast food wrappers.

But this is even more disconcerting: Bullets. Yep, lying in the road, so obvious and glistening they grab my attention as I ride past them. You may ask yourself, as I have, "Why the heck are there bullets lying about on the streets?" I don't know the answer, but I'll bet they aren't being dropped by hunters and target shooters carrying legal firearms as they go about in lawful exercise of their second amendment rights.

Clarification: I didn't find these in one ride, or the same place, or even all this last year.  I did, however,  find them on regular suburban neighborhood streets, and not on country roads.

Maybe it's related to this: 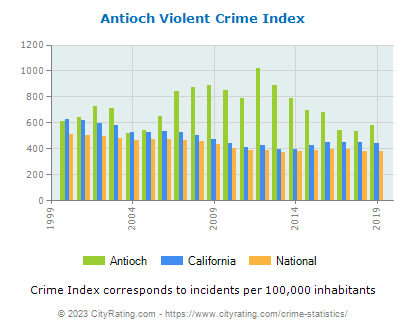 Maybe I should just be grateful that, at least so far, I haven't been aware of anyone taking shots at me as I cycle through town. Perhaps it's just a matter of time, and I've been foolish to point out the possibility of becoming a potential target.

In any event, I am once again reminded of a friends modified appropriation of a line from "Anchorman: The Legend of Ron Burgundy."