Tricia and I rode the Diablo Century Sunday. One hundred of the slowest miles I've ridden. I started feeling low, and finished lower. Every once in a while I'd push myself up to slow, then drop back to barely moving. I'm not sure if it was last weekends double, a week off the bike letting me knee recover, the extra glass of wine at dinner, or the alignment of the stars. But I was dog meat all day. But I grunted through it. I didn't even bail at the metric point turn off.

A shame, because Tricia was in great form. She held back a lot, but I still didn't see much of her. She just couldn't ride slowly enough. She'd have enjoyed rocking this ride, but I didn't give her a chance.

On the up side, my knee was fine after I warmed up, so I think I'll be OK for the Davis Double. Here's hoping I don't ride there like I did today. And I made it. I can ride an ugly 100 miles even feeling like crap. That's got to be some kind of accomplishment, even if it's the sort of thing that doesn't usually get written up in magazines. No medals were awarded, but still...

The ride it itself was fine. Good support, and a nice route that included Morgan Territory, Sunol, Redwood Road and Pinehurst Rd and Canyon. Even really nice folks at the stops. Sure, I've done this on my own, but it was nice to support a good local effort by the Walnut Creek Jewish Community Center.

No photos. I carried a camera, but was too beat to use it. Plus, without Tricia near enough to photograph, what would be the point?
Posted by Curtis Corlew at 8:40 PM 4 comments:

Performance enhancing drugs for me 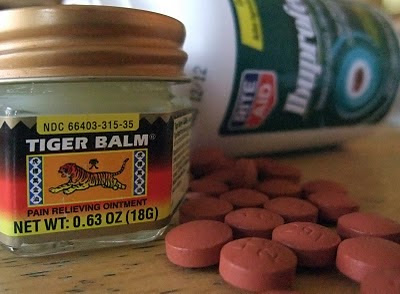 I keep reading about performance enhancing drugs, and I thought "Why are they just for professionals?" After all, we get to ride the same bikes they do, and wear the same clothes they do. So when my knee started hurting to the point it was affecting my riding I did what I assume the pros do: I went to the apothecary seeking help.

Indeed they had exactly what I needed. Magic redish pills called Ibuprofen and a stinky concoction named "Tiger Balm."

Humming "Eye of the Tiger" for good luck I applied the balm and ate a couple of ibuprofen and, shazam, I was rolling again.

I guess it isn't really fair, as it does give me an advantage over the competition. Later that day I was able to blast away from a stop light and drop a hybrid rider who had bragged about his "eighteen-mile ride" while we waited for the light to change.

There is a downside I understand. The reek of Tiger Balm is enough to send friends and family running. And if you use ibuprofen you run the risk of getting used to not being in pain. But at the level I ride at I guess I just have to be willing to make a few sacrifices. So it goes.
Posted by Curtis Corlew at 12:32 PM 2 comments:

If you appreciate the environment of Bakersfield, the culture of Fresno or the city planning of Oakley, you’ll enjoy Hemet California, the starting point for the Hemet Double Century.

Fellow BikeForums.net poster LanceOldStrong and I launched from Northern California on Friday morning. Mr. LanceOldStrong commented that his Garmin only noted “Here be dragons” once we got south of central California. But we were on our quest for leg two of our attempt for the California Triple Crown jersey and would not be deterred. After a seemingly endless drive we finally arrived in Hemet, where we checked in and were informed that, “No, the route is not marked at all,” but we could leave as early as we wanted.

Bikes in order, clothes set out, we got to bed early and I promptly had dreams of trying to start, but not being able to find my arm warmer. I unpacked my seat bag and pulled out jackets, tires, cantaloupe and all kinds of impossible stuff, but no arm warmer. I had a two-foot tall stack on the sidewalk. What a dream. But I woke up and it was time to go. Oh, wait, no it was only 9:30 pm. And that’s how my night went.

Eventually it was really time to leave. We rolled over to the start and signed in and were on our way, with lights, in the total darkness of 4:30 am.

The first few miles were a preview of my entire day. I sat on LanceOldStrong’s wheel and hung on for dear life. Darkness? Ha! Bumpy road? Ha! Traffic? Ha! We just screamed through the night, him leading, me worried I’d lose his wheel and never see him again.

As strong a rider as Mr. LanceOldStrong is, he is not a climber (thank God.) Usually climbing is where all the work is. For me, the only rest I got was on the few hills when he slowed down. I often found myself praying for more hills. I didn’t get many.

There is one area I’m quick at: Rest/check points. Early in a ride I hate to stop for longer than it takes to fill my bottle. I’m so old I feel like my engine just seizes up if I stop for long. Mr. LanceOldStrong is more methodical at the stops. I found myself circling the parking lot enough that it showed in my mileage total.

But I can’t complain. Thanks to OldStrong’s big pulls we ended up with a rolling speed average of 15.9 for the first 100 miles.

A unique feature of this double is that it loops back to the start at 100 miles, so we were able to drop by our hotel, shed some clothes and restock energy stuff before we started our second half.

I’m not used to astroturf lawns, but if I lived in Hemet I sure would be. Our route took us through the mobile home zone where they seem to be a requirement.

At last we got to a decent hill. It’s really only 1000 feet over eight miles or so, but to hear people talk you’d have thought it was Mt. Diablo. It was the only real bump the entire day, and it was also by far the most attractive part of the ride.

We had a rest stop/check point at a winery where I caused some small amusement by buying four bottles and asking for them to be sagged back to the start. (It worked!)

After that it was just trying to hang onto OldStrong’s wheel again.

Right at dusk as the light started to fade and we started up a hill we rode past a stock yard ripe with the aroma of urine and manure and into a swarm of small bugs. It was really a low point. But after cresting that last bump we kicked on the lights and both got a burst of “horse and barn” and managed to light it up for the last few miles. It turns out that 203 miles feels a lot farther than the 195 of Solvang.

After the ride we managed to have another adventure trying to find a restaurant without a drive-through that stays open after 9pm in Hemet. We eventually ended up at what OldStrong called a “gringo mexican” place next to the ride start. I got the margarita I craved and all was good.

Special awards:
LanceOldStrong for the big pulls, and great navigation
Nick and Melgarpoe, who we hooked up with on the ride and were just plain fun to roll with.

Bonus photo: Los Medanos College doesn't allow bikes inside campus buildings, but these cool scraper bikes made it into the library entrance anyway. I'm glad. They kind of class up the place.
Posted by Curtis Corlew at 9:15 PM 2 comments:

Joyce in the yellow and Tricia in the white cruise the California foothills.

The Party Pardee ride out of Ione CA put on by the Sacramento Bike Hikers was a blast. Every year they have a theme. This year's was baseball. They had baseball trivia questions lining the walls at the post ride dinner. Servers wore ball uniforms. They even served hot dogs at the rest stops.

The ride itself is 65 miles through the absolutely beautiful springtime California foothills. This years rain produced ponds and filled the creeks along the rides. The wildflowers were out in force. Minimal climbing made for a fast and delightful ride, but we still had time to enjoy the views.

The day started a bit on the cold side, and instead of warming up it just got colder. Still, there were just enough hills to keep us warm. The Bike Hikers insisted on a rest (read food) stop every 15 miles, so I dutifully stopped and stuffed my face at every one. I may have gained weight on the ride. If the ride food didn't do it the stops at two local wineries put me over the top. All in all, a very good day.
Posted by Curtis Corlew at 9:15 PM No comments: