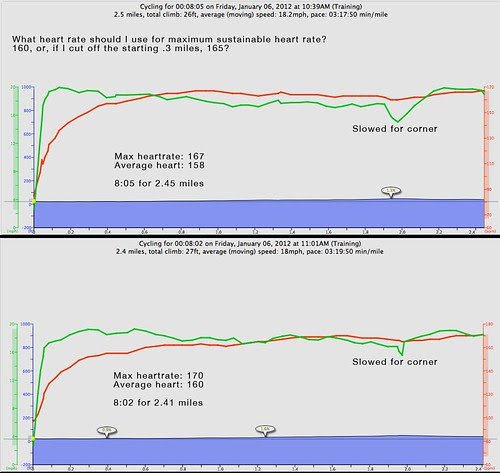 Here I am, armed with "The Time Crunched Cyclist" by Chris Carmichael, as if I'm actually going to train for the Slovang Double Century I signed up for. I know I'll ride a bunch, but the idea of planned training is intimidating.

The program starts with a test: find a flat road where you can ride for eight minutes without stopping.
From a near stop, accelerate and hammer as hard as you can for the eight minutes. Record your max heart rate, and average heart rate.

Sounds easy, but it isn't. Just finding a road was tough. I used Chestnut near the Byron Highway in Brentwood, a road was almost long enough, with one turn onto Sellars.

Starting was tough. I had to nearly stop, then hit the lap button on the Garmin while watching my stopwatch.

Riding as hard as I could was, well, hard. It hurt. I kept thinking, as my legs burned (shut up legs) "Do I have more?" and tried to give it.

While not backing off early, I tried to hit the lap button at eight minutes. I was off by five and two seconds.

Now I need to interpret the results.
My Max heart rates were 167 and 170. In the past on short effort hills efforts I've recorded 183 as a max.
My averages on these two runs were 158 and 160. But if I remove the startup heart rates I end up with 165. I did average 165 during a Mt. Diablo Hill Climb Time Trial. So did I ride hard enough this time? Did I have more? Would I have been able to achieve a higher heart rate if I worked harder?  Could I have possibly worked harder? Are the previous highs hill related?

So, what number should I use for my maximum sustainable heart? It matters because that's what gets used to calculate the workouts.

I'm lost. I fear all I've really done is confirm that I'm really slow, and provided only confusing numbers that won't help me figure out what I need to do.

Maybe I should just go ride the bike.
Posted by Curtis Corlew at 9:27 AM