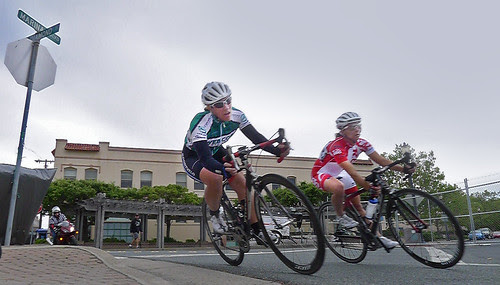 Tricia and I went to the Pittsburg Twilight Criterium. A real bike race with real bike riders, so close to home. So many healthy looking people, so many way-cool bikes. Wow.

The temperature was 60, but the wind was howling. I can't imagine racing in wind like that. I would hardly enjoy just riding in it. I was so cold I could barely stand it. We kept trying to find wind breaks to huddle behind. It's really too bad about the weather, because the event itself was wonderful. It's supposed to be yearly, and I really hope it is.

We weren't able to get there until just before the womens race, but we had a chance to walk around and see the booths and such and scout the course. It wasn't crowded at all, so we were able to  find interesting corners with great views to watch from. The women's field had a bunch of big-name riders from all over the world, and holy smokes could they fly. The seventy-five minute of full-tilt race was 15 minutes longer than most womens crits I was told, but the fast riders finished at about the same lap time as they started. It was breathtaking to sit right on a curb and have them fly by at warp nine.

Kudo's for the sponsor, Project Sport for having an equal  $5000 purse for both the men's and women's main events.

As much as I loved seeing the bike race and everything that went along with it, there's one weird thing that seems like a holdover from some previous era. I know it's tradition, but I find it a bit embarrassing. It just doesn't seem to have anything to do with racing, and feels like pandering.

Why are there "Podium Girls?"  I don't doubt these young women are fine people and all, but the major make-up, heavily-style hair and frighteningly-tall stiletto heels look out of place at an athletic event. And even more so at an event where there are women competitors killing themselves to squeeze every ounce of power and skill as they make superhuman efforts. One group is there because of what they can do, the other for how they look. I don't want to criticize the "girls" themselves, who seem to be good sports — they even posed for a photo with me, and countless other geezers — and who seem genuinely friendly, and are there of their own accord. I know it's supposed to be all in good fun, but still, I do wish bicycling, as a sport, could move past this uncomfortable anachronism. 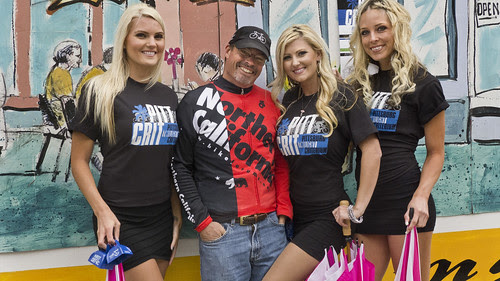 Posted by Curtis Corlew at 8:23 AM