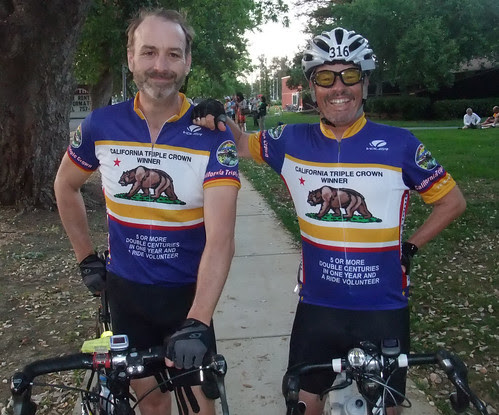 Let's start the Davis Double report with some stuff that might actually be useful.

As a veteran of four Davis Double Century rides (and 4 other doubles) let me offer my Official Old Guy and Non-Athlete Tips for Surviving the Davis Double™.
Disclaimer: These work for me. There are many way to attack this ride, but these are mine.

• Start early. I think it's better to start in the dark than finish in the dark. There's no one stopping you from leaving at 4am (like I do) or even earlier. Leaving this early gets me back just before it gets dark.

• The first 20 miles is flat and you'll be excited. People will fly past you at warp nine or faster. Let them go. Ride with a group that won't kill you. Remember, it's a long day; take the long view. Don't burn out in your first 30 miles.

• At rest stop number one you can leave your lights and pick them up on the way back (mile 180) as it's the same stop. I've done this and it worked. I've also just left them on the bike.
Another possibility is to just roll past rest stop one. It's only been 20 miles, and if you followed my advice you aren't tired at all. The time you save by not stopping is huge. You'll end up ahead of much faster riders. If you do stop, don't mess around. Get in and get out. Don't chat.

• Rest stop management is one key to finishing the same day you start. I didn't dismount my bike until mile 100 in 2010. It worked fine. I just grabbed water without even getting off the bike, and then just rolled on.

• Cardiac hill, the first climb, is no big deal, relax and enjoy it.

• The next rest stop is a chance to make sure you have water and add some sunscreen. Don't skimp on the sunscreen. Really.

• Cobb Mountain, up next, is a royal pain. It comes when the sun is full, and it's too long and too steep. I can't power through it. I drop into my lowest gear and just try to keep going. The rest stop at the top… it isn't the top. Enjoy it quickly, but move on, there is more climbing.

• You've earned your descent. It's frighteningly fast, and there are shadows that could be hiding bike-eating potholes. Relax. You'll be passed by people going over 50. Slow down and live to ride another day.

• Pretty soon you'll get to lunch. Make it quick.

• I keep saying don't screw around at the stops, and I mean it. Stopping for food and eating really slows you down. I carry a bottle of mixed Hammer HEED and Sustained Energy, and a big baggie of more. I also haul a couple of Powerbars and a bunch of gel. I try to eat on the bike as much as I can.
Sure, if you are fast and strong you can bomb from rest stop to rest stop and visit, eat and have fun. But if you are slow like me you need to do everything you can to keep moving.

• The route after lunch is a pain. It's not a climb, so you don't get to feel good about conquering a mountain. It's just slightly uphill into a headwind. Seek a slow moving pace line, or settle in for a no-turn bit of painful boredom. After the right turn there's a climb that looks to be long, but isn't. The descent is a delight as the road is wide and smooth. Enjoy it because the next climb, though not steep, seems to take forever. Eventually you'll get to Resurrection Rest Stop and be happy.

• A short climb more and it's generally downhill (there is one small climb in the middle) long and fast. Enjoy. The right turn onto Cache Creek is a slight downhill, but the headwind can kill you some years. Roll on to the next rest stop and then past the casino. The road narrows, pickups scream at you and it is no fun until you get off the highway. It's all flat from here on, and the wind will determine how your day goes.

• The rest stop where you may have left your lights is the next to last. The last one is seven miles from the end. It's a Fire station that serves Chili. I just want to be done at this point and would just as soon do without. Some riders insist you haven't done Davis if you skip the Chili. I do anyway.

• At the end, don't forget to check in and pick up your shirt. Smart riders have a cooler with cold beer waiting in their cars.

Stuff I take other than the usual: 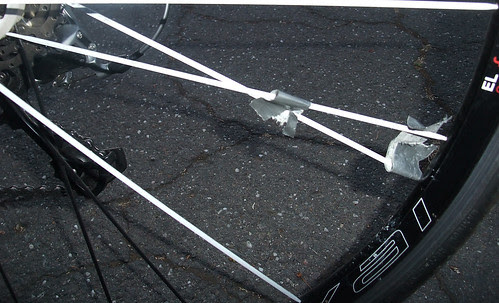 2011 Davis Double Ride report.
I did my usual start at 4am with riding buddies Dan and Ron. Dan did the Devil Mountain Double just a couple of weeks ago and was doing this just to visit with me and have fun. Ron is seeking his 1000 Mile Club Triple Crown jersey. 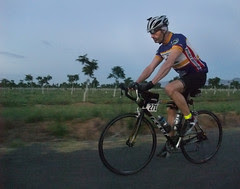 With all the rain this year I haven't trained much, but I do bike commute every day and have a couple of centuries under my belt. Still, I wasn't as strong as I might have been. I had trouble holding Dan's wheel and he kept backing it off just so I could stay with him.

That said, even though we were taking it easy, we rolled pretty well, with favorable winds, through the morning. We did make a wrong turn, but thanks to luck and Ron's smart phone we were able to get back on course without even adding any miles.

At the first climb up to the dam I heard my bike making the weirdest noise. I stopped to check and discovered a broken spoke. Damn it! I loosened the brakes and went on. Later Dan noticed a roll of duct tape in the road, and we stopped to tie up my spoke. It worked well, though I did have to stop several more times for adjustments.

The climb up Cobb mountain is every bit as awful as I remember it. It takes too long, and when you think you are at the top, you aren't.

I knew I hadn't been on the bike enough when my butt began to get worn out around mile 130. I've not had that happen before. It just got sore, like I'd been on a bike seat all day.

After the rest stop at Resurrection when the road gets flat again we we rolling along and a paceline came by, not a lot faster than us. We jumped on, but they were so squirrely that LanceOldStrong started to be offended — he's a delicate sort. They'd speed up, slow down, wobble, speed up, slow down, You know the drill. \ So Dan dropped the hammer. He just exploded away. It was impressive. I watched him bridge to the next group, then explode past them. It was fun to see the guys in front of me looking around all confused.

Later, Dan pretty much dragged me, and a few others, along at 18-20 when he got "horse and barn" syndrome.

Tricia met me, Julie and Dan's kids met him. Ron rolled in a few minutes later. He rolls faster, but enjoys the rest stops longer. Check out his excellent ride report and photos.
Tricia drove me home as I was in no shape to operate a car.
I was beat, but managed 9 miles the next day, bike commuted on Monday, and played 3 sets of tennis as well. It's Tuesday and I'm pretty recovered. Life is good. I may even ride another double some day.