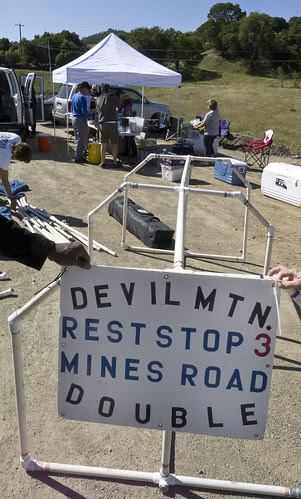 Riding the Devil Mountain Double, a 200 mile bike ride with 20,000 feet of climbing just wasn't in the cards for me. But the Quack Cyclists did a great job supporting the Knoxville Double I rode last year, and my friend LanceOldStrong was riding the DMD, so I signed up as a volunteer. I was placed at a food/water/rest stop at Mines Road, ninety-something-miles and three major climbs into the ride.

It was an enjoyable experience. The Quacks are well organized, and are all about helping the riders. When a cyclist rolled in someone was there to hold their bike, while someone else asked what they needed. Volunteers hustled to fill their water bottles, and add whatever magic Hammer powder they needed. There was a huge assortment of cyclist-friendly food, from fresh fruit to potatoes, from peanut butter sandwiches to Hammer Gel by the gallon. Volunteers brought camp chairs for cyclists who needed a break. Even the riders were considerate. I can't imagine how they are able to focus on anything but the ride, yet many — maybe most— thanked us for being there for them.

It was also fun to have familiar faces from Bike Forums roll through, and have the opportunity to help them in some small way. Ramon came flying through early. Marco came in reasonably early reporting three flats and a broken front derailleur. He'd been shifting with his foot and planned to carry on that way. LanceOldStrong rolled in looking happy as could be and ready to tackle the next section.

At one point a little girl came up to me and, in an accusatory voice demanded to know "Why are you wearing that shirt?" referring to my Davis Double Shirt. I told her "Because I did that ride." That must have been the right answer, because she smiled and said "So did I." I remember seeing her on a tandem and being amazed, and here she was, tandeming the DMD. Watch out world.

By the time we packed up I was pretty beat after about five hours of trying to be "on." Then I realized that the riders started before I got up, and would finish after I was in bed. I felt silly, but no less tired.

The most frightening thing I saw all day was the first rider through. He was about 20 minutes in front of the next rider and must have been pushing a 20 mph average even after thousands of feet of climbing. 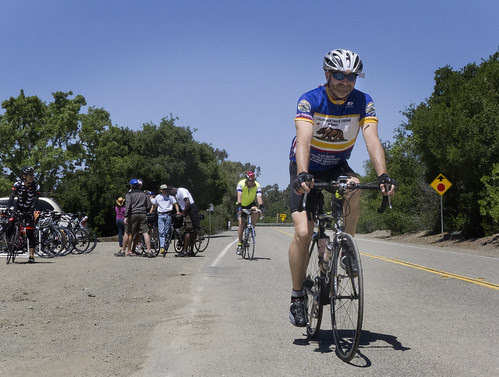 Crowd-favorite LanceOldStrong exits rest stop three, looking strong with over 100 miles to go.
Posted by Curtis Corlew at 8:34 AM