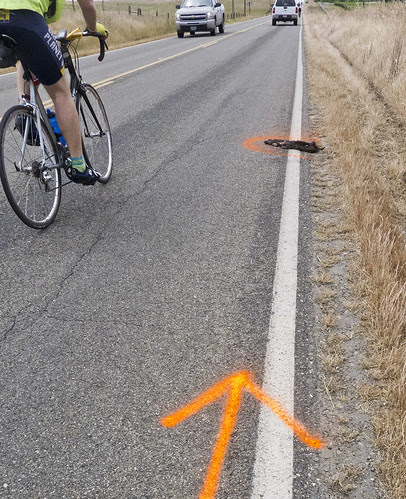 What can I say about a ride that has not only has route markings, but road kill markings as well? Those, and a brief "traffic jam" that was a small cattle drive are just two of the things that made the Lodi Sunrise Century a  ride fun.

I rode with Tricia and Joyce until the first rest stop. I tried to wait for them, but I hate stopping, especially when I'm just getting warmed up. Tricia had Joyce, but I had no patience. I was in full "next week is the Davis Double" mode and took off. I thought I might see them later, but I didn't.

The ride through the California foothills featured very little automobile traffic (with the short exception of the narrow Liberty Road, and the big trucks that scared the bejeebers out of me.) It included a brief tour of walnut orchards, endless fields and a bunch of delightful rollers.

The easy climb up to Pardee Reservoir was beautiful. It was so green, and seeing the amazing amount of water poring through the spillway was awe inducing.

The friendly tail wind became a pain in the face headwind on the return leg. I was lucky to hook up with a couple of strong (and big) riders who vacuumed me along at 15-18 mph for a long way. I eventually lost contact at 100 miles. I'd missed a turn earlier and added 5 to the 103 mile route. My last 8 miles was considerably slower, but I did manage 15.1 average for the first 100. I might have even been able to bring it up a hair if I'd not been caught behind the cattle for a bit.

A good ride, and a quick stop at the Michale-David Winery on the way home made for a delightful day.