We in the East bay are always hearing about the great South Bay climbs, Fearless mapper of rides Dan "Lance Oldstrong" Butler decided we should give them a shot. We met up with Glenn Wenig and launched ourselves.
When Dan told me Quimby Road was about like Mt Diablo from the junction to the summit Glenn laughed and said "It's harder than Sierra Road." Glenn was right. I was amazed how hard it was. This was my first serious ride since being smacked by a truck in December. I was worried about the whole venture. But I had a great day (for me) and crawled up Quimby and its many double-digit steep sections better than I even dreamed I would. It was even fun.

After the Quimby warmup we rode San Felipe and Metcalf, roads I also hear mentioned all the time. We'd planned on riding the famed Mount Umunhum as well, but due to a slight Garmin mapping fail we made a wrong turn. By the time we figured out what we needed to do it seemed like we'd be out later than I wanted to be on the road, so we headed back.

Another minor error put us on Tully road with 14,756 cars, all driven by the clueless who were also in a hurry. It was a real contrast to the rural roads we'd been on for a lot of the ride.

We did get to see Communications Hill, a weird Soviet Brutalist dystopian-looking tower on a hill that's now part of a housing development. Of course, being that it was on a hill, we rode up it. 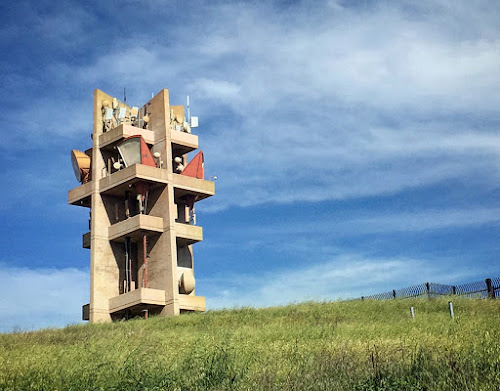 A big plus for me: Photos of myself! Most of my blog posts are my photos of other people. This time Glenn shot some that make me almost look like a cyclist. All in all, a big win and a fun day. Up soon, I hope, Mount Umunhum.

Downside: Glenn and Dan both have newer Garmin computers than I do. After seeing what I was missing, my 500 is on eBay and my 520 is on order. So this ride cost me a bit.

Posted by Curtis Corlew at 8:32 PM