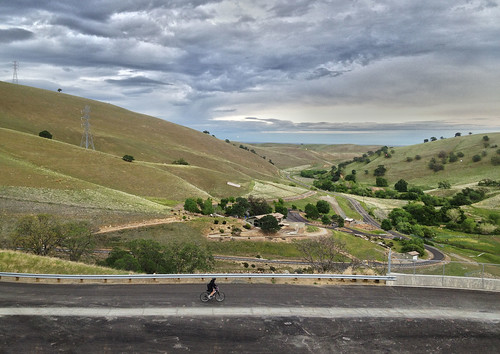 The race didn't feel like it was about bike riding as much as it was about whether the rain would come before the race started. It was supposed to rain Friday night, and when it didn't, I decided the Los Vaqueros Dam Time Trial 2014 was going to happen for me, even though the skies were dark dark dark. Still it was hard to leave my warm and comfortable home to head out with only a vague hope of a rainless ride. But it worked out! The rain held off until I got home.

I rode this event in 2008 and 2009, but they cancelled it when they were busy raising the dam height. It came back, but I was scheduled elsewhere. This time I got a another chance. The course got slightly longer, with a short straight away sprint ending at the top of the new dam. The area is usually closed, so not only is the race fun, but the chance to see see the views from the dam are a rare and delightful opportunity. 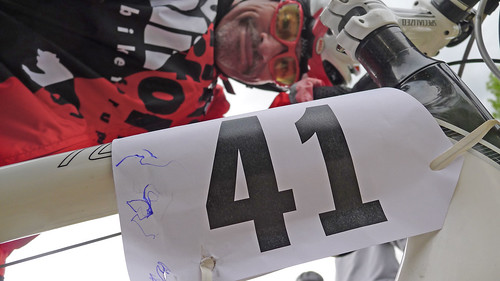 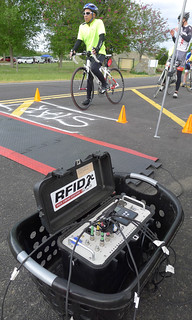 This time trial is a real community event. They try to schedule the riders so the competitors with young kids go early, then have a chance to ride back to the start and escort their munchkins up the hill. Despite it being a "mere" community event, they have chips embedded in the race numbers, and electronic RFID timing equipment. It's all very cool.

There's a soft sticker inside the number that is read by a mat we rolled over at the start, and again at the end. They had a computer set up so we could see our times and current place as soon as we hit the finish line. I was 10th overall for just a moment before the actual fast riders finished. 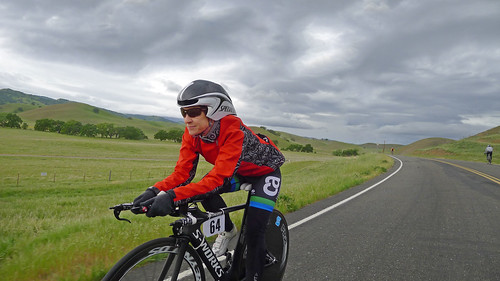 I didn't want to pretend I was all serious about this as I know I'm not really a racer and surely am not a contender, but when I showed up and saw the aero wheels, time trial bikes and alien helmets, I was a little overwhelmed. I teased some riders about seriousness violations, but then I thought, heck, I should at least take off my water bottle and pump. I guess that makes me almost as bad. Fortunately über-mechanic Jim McFarland of the Wheel Peddler was on hand with tools, and off it came, thereby saving me .21 seconds I'm sure. 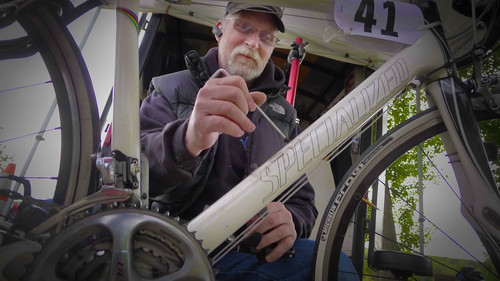 This year the race went not only on it's usual uphill route, but into a huge headwind as well. What a pain. My heart rate was off the charts the whole time. (OK, not really. I have charts, so technically it isn't off of them. It was, however, at the highest end.) As always I hurt so much at the end, but still think I could have gone harder, though I don't really know how. I managed, if I remember correctly, 14:10. The Strava segment says 14:05 and an average of 222 watts, which, though low power  in the cycling world, is more than I thought I could do. I don't know how I placed overall, but I did manage to pull off third place in my age group. (Yes, there were more than three people in my group. I checked to be sure.) I even got a medal. 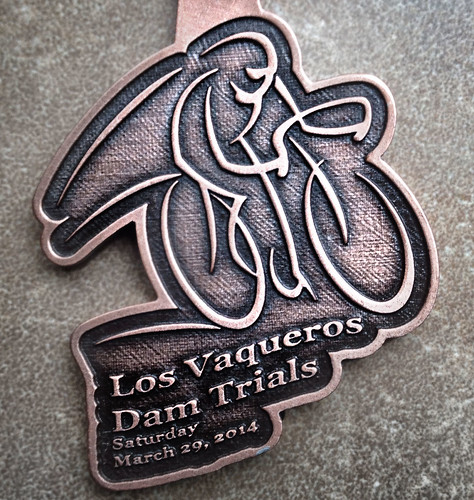 Thanks, Contra Costa Water District, for a cool event!
Posted by Curtis Corlew at 1:57 PM