Being as Lance Oldstrong (AKA Dan) is getting ready for the Death Valley Double and I'm working on being ready for the Solvang Double I suggested a 60 mile bike ride, with a little bit of climbing for Saturday. He countered with "Let's do Mt. Hamilton, then drop down the back and climb back up again."

My Mom used to say things like, "If Lance Oldstrong jumped off a roof, would you jump off a roof?" as a warning to be smart. Of course, being a smart ass, I always answered "Yes."  I did this time too.

We picked a beautiful day. It was cool, but the sun was shining and there were no clouds but for the mist hanging over San Jose.

I was a bit worried about the massive amount of climbing, but we took it easy on the ride up and it wasn't bad at all. Dan pointed out the road was graded at a constant six percent to make it possible for trucks to get building materials to the observatory at the top. I had fun talking to another cyclist about our backside plan. He seemed amazed and kept trying to talk me out of it. Ha! 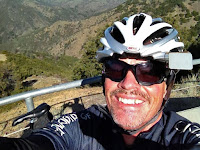 On the back side of Hamilton the road builders had no grade constraints. It's double digits most of the five miles to the bridge where we turned around. I was glad I'd put on new brake pads, and even then it was a white-knuckle decent.

The descent wasn't as much fun. The top is bumpy with a lot of switchbacks. When we got part way down we were passed by a guy on a beautiful white bike. Dan doesn't like that, and gave chase. I'd not a mad-cornering descender, and I found myself doing wind sprints between the corners trying in vain to hang on, and watching them pull away. It seems wrong that I had my highest heart rates for the day on the flippin' descent, but I did.

After Dan big-ringed him up the last little uphill section they sat up and waited for me. Mr. White-Bike offered a Mexican restaurant suggestion that we ended up taking for out post-ride protein reload session.

All in all, 50 miles, 7501 feet of climbing, and a darn swell day. I learned that I'm in better shape than I thought, and that I can't use my iPhone to make photos while wearing wool glove liners under my cycling gloves.

No ride is really complete without a Lance Oldstrong song, so here, used without any permission whatsoever, is:

Bows and flows of yellow lines and science castles in the air
And feather canyons everywhere, I've looked at Hammie that way.
But now they only block the sun, those domes that rise above everyone.
So many things I would have done but Hammie got in my way.

I've looked at Hammie from both sides now,
From up and down, and still somehow
It's Hammie’s illusions I recall.
I really don't know Hammie at all.

Moons and Junes and Williams wheels, the dizzy dancing way you feel
As another slow ascent comes real; I’ve looked at Hammie that way.
But now it's just another ride. you leave 'em laughing as you glide.
And if you crack, don't let them know, don't give yourself away.

I've looked at Hammie from both sides now,
From give and take, and still somehow
It's Hammie's illusions I recall.
I really don't know Hammie at all.

They shake their heads, they say I've changed.
Something's lost but something's gained in riding every day.

I've looked at Hammie from both sides now,
From win and lose, and still somehow
It's Hammie's illusions I recall.
I really don't know Hammie at all.
Posted by Curtis Corlew at 9:50 AM