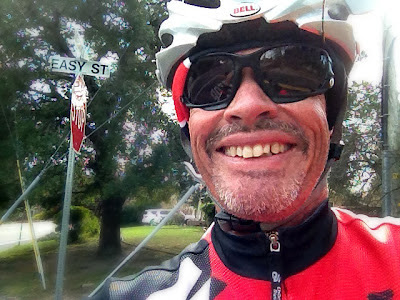 We rode by Easy Street on our "easy tapering ride" that  Lance Oldstrong put together. Except for being 70 miles with three lung-searing climbs, it was pretty relaxing. I only managed to find a new max heart rate a couple of times. I took advantage of the climb next to 580 on Dublin Bl to get a workout — and later on some semi-secret climb Oldstrong found (update: Palomares Hills) — to darn near kill myself. Tricia went along, and we tried to drop her all day, but she just wouldn't stay dropped.

It's impossible tp use an iPhone with fingered gloves on, so all my images are off the bike. The most amusing was this really really expensive time trial bike with a freakin' trailer. He carries ... dogs. I asked him not to go where we were as I wasn't in the mood to be passed by a trailer bike.