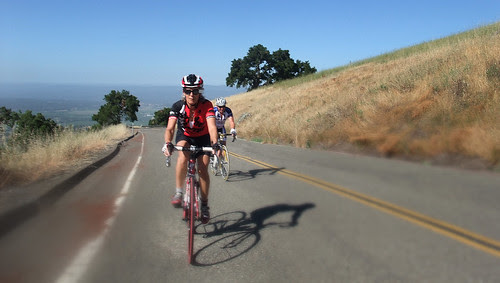 Just about everything went right and even the things that went wrong went well.

Steve Cozza's Giro Bello is a grand idea for a wonderful cause. Starting in Sebastopol and winding up toward Cloverdale, it's well beautiful and well-organized ride. Even the tee shirt looks good.
You can read about Steve's selfless efforts here. 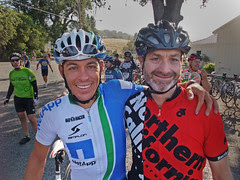 I'd checked the weather before we drove up Friday night with LanceOldStrong to meet with Steve the afternoon before the ride. It promised to be cool in the morning and not hot in the the afternoon. I didn't even bring any warm clothes. That night the forecast changed to the 40's for the morning.

But, good thing number 1: I managed to buy a tee shirt to wear under my jersey at the second hand store across from the motel for only $1.00.


Good thing number 2: It wasn't really as cold as the 45 degrees the weather station said it was going to be.


Good thing number 3: My Garmin 305 mount broke on the first major climb. That's bad, but when it bounced it didn't break. I may have a second mount I can use, and even if I don't have it, a replacement is cheap. 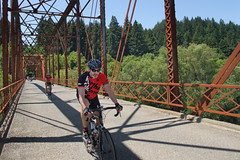 Good thing number 4: The Geysers climb was really really hard, but I lived through it, and by the time we reached the top I was getting used to moving at 3mph. The temperature was perfect. I'd have hated that climb at 100 degrees.

Good thing number 5: The descent was over some of the most riddled holes I've ever ridden. I didn't crash. Dan broke a spoke, (bummer)  but the wheel stayed round enough (good thing 5a) that he managed to finish the ride. At the lunch stop he asked the mechanic from Healdsburg Spoke Folk if he had a spoke. Ironically, he did not.

Good thing number 6: The unique post-ride meal. We were issued meal tickets we could use at any number of different food vendors. I had some tandoori chicken with rice that was right tasty. 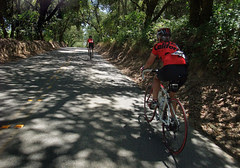 We'd started at 6:30. Steve Cozza started at 7. We had a pool about when he'd pass us, and later a pool about when he'd pass us on the climb. I won pool one, and tied Tricia on pool two. Really, I think he was able to pass us partly because he's a pro cycling god, and partly because he had a motorcycle to carry his water and spare wheels. We carry our own pumps, spare tubes and patch kits.  And our bikes weigh more — partly because big sprockets weigh more than small sprockets. Plus, I'm fatter. So really, who's doing more work? And, therefore it only makes sense to ask: Who's more tough and studdly? Yep. That's right.

Anyway, despite making a wrong turn right out of the parking lot (Hey, shouldn't there be road markers? Where are the road markers? Oh…) and adding a mile to our 106 mile day, we all had a good time at a wonderful ride on a grand course. 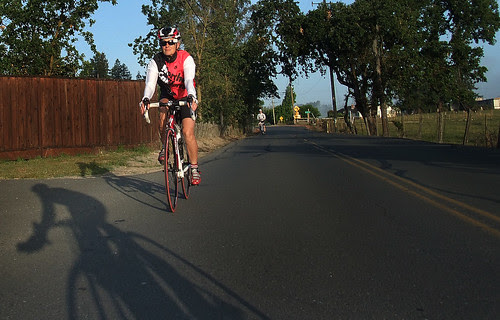 Posted by Curtis Corlew at 3:23 PM