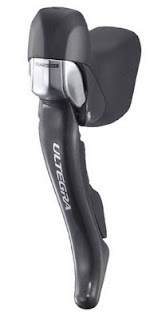 Following my last entry and a post on Bikeforums.net mechanics forum I've learned some interesting information: My shifter problem is not unique.

"200miler" on bike forums, who's provided a lot of support for double centuries, shared some interesting info with me.

Curtis, I've been running across this problem/issue for the last 3 years, or so, while providing roving support on various doubles. I get a minimum of one instance per ride. My DMD instance happened on Mines between the water stop and the Junction after I'd left you folks at the Mines RS.

About 1 year and a half back, I had a phone conversation with Shimano Tech support in SoCal. There was a more than a bit of hemming and hawing, but I finally got, IMO, a tacit agreement that there was a design issue [his words!]. The angle that the cable leaves the indexing rachet retainer and goes thru the brifter housing and into the cable housing causes "undue stresses" and wears the outer strands of the cable until, BINGO, you've got what you experienced with your 6600's. Getting the nubbin out after the cable is broken is as you relate, a real PITA. In some cases the nubbin gets jammed inside and can't be shaken loose; a new brifter is the only solution. Catching the cable in its frayed condition can be a field repair if done with due caution [on Quack events of course!]. With a broken cable it's a crap shoot; depends on where the nubbin is.

The relevant brifters include the 6600 and 6700 Ultegra, and 7800 and 7900 series Dura Ace. I haven't run across any of the 5700 brifters "in trouble" but I think that's only because they are not in wide distribution yet. Note that this applies to 10-speed only; I've never run across, nor heard of, any 9-speed issue. There is no particular cable recommended to replace a damaged one. If a 3rd party cable is used it won't necessarily prolong its eventual replacement. Of course, there *COULD* have been a flying production change on the Shimano production line.....

The only real way to prevent this from being an event-ender is to visually inspect the RD cable on a regular interval, or when ever you sense a change in shifting smoothness.
YMMV
-dg

I've made a permanent page with repair instructions.

I should point out that I was able to fish out the broken end on 6600 shifter without going to such extremes, but it did take a long while.
Posted by Curtis Corlew at 2:13 PM