Antioch Police respond to my letter, and a book recommendation 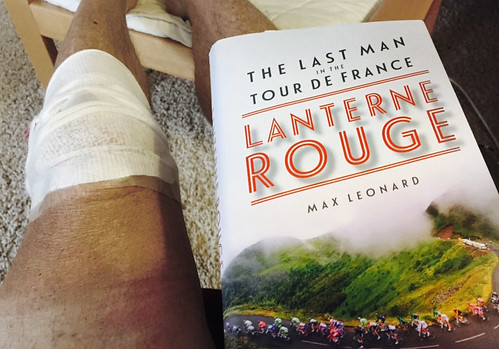 Because I'm pretty much immobile I have plenty of time to meditate on my assault while bike commuting and even read a bit. Jennifer, a student from years ago and now a friend as well as an ace journalist, sent me a "recover-well" gift: The wonderfully interesting "Lanterne Rouge," a fascinating book about the men who come in last during the the Tour de France. It's well researched, well written, and a lot more compelling than you might guess. I'm enjoying it a lot.

I've also had time to write letters and emails. I wrote one to the Antioch Police Department with some questions about my incident and crime in general. I'll include it at the end of this post. Much to my surprise I got a response in the form a phone call from a Police Department representative.

I was surprised when she told me that my case isn't an Antioch Police Department case. The Delta DeAnza Trail is not in their jurisdiction. It's under the East Bay Regional Parks Police. The Antioch PD officer who took my report was taking a "courtesy report." It's not an Antioch case, so there is no Antioch investigation or followup. I didn't ask, but I'll bet it doesn't end up as a violent crime in Antioch's crime statistics. She told me that the report was forwarded to East Bay Regional Parks Police. Being relatively immobile right now, I may have the time to write them and ask some of the same questions.

I asked how big a deal a robbery with a gun resulting in an injury assault was. Her careful response was that being as this isn't an APD case it won't receive any further attention from them. When pressed, she said this is not an unusual event for Antioch.

I want to be clear I have no complaints about the Antioch Police. I don't know what more they could have done. I'm more concerned that I live in an area where a crime like this is not noteworthy in any way. I don't need to be the center of attention, but I wish I lived somewhere that this was so unusual it warranted  a newspaper story, warning flyers posted along the trail and just a touch of public outrage. Alas, that isn't the case.


Letter to the Antioch Police

I was assaulted and robbed at gunpoint on Wednesday, July 29 as I bike commuted on the Delta De Anza Trail behind Turner School. The encounter left me injured and required a hospital visit. At this point I am still barely mobile. Antioch Police officer Amel Sahnic came to the scene and took the report, case number 15-7492  For the record, I suffered three fractured ribs, a large wound on my knee that required stitches, an odd shoe-sole cut on my head as well as other cuts and massive bruising. I hope to be able to return to teaching when the semester starts, but don’t know for sure.

As a “regular old citizen” of Antioch I have little understanding of police procedure or perspectives. I really don’t know how you approach your jobs, or even exactly what that job entails. I don’t have any complaints, but I have questions and I’m hoping you might have time to answer a few.

I’m not sure how to word this so it has the right tone, so please read this with an open mind.

How big of an event is this for the police and Antioch? I know it is for me, but have we reached a point where having a 61 year old college professor attacked, robbed at gunpoint and sent to the hospital is hardly news? That crimes like this are common enough that this one doesn’t even stand out? I have no expectations about what you should do, but would like to know if it’s now something unfortunate that happened in the past, or is this case a continuing concern.

I’d also like to know if I’m part of a trend. Have there been other robberies or attacks along the trail there? If there have been, does it appear to be the same people, or different perpetrators?

Has APD been able to make any efforts to increase safety along this trail? As a bike commuter, I hope to get back in the saddle as soon as I heal. The nearby roads aren’t bike friendly. I’m looking for information that will help me make decisions about my commute.

Does APD coordinate or share information about incidents like my attack with other agencies connected to the trail, like East Bay Regional Parks or Pittsburg PD?

Thanks for taking the time to read this, and thanks in advance for any reply you’re able to make.

Just in case you’re interested in my details, reactions and comments, I blog on my Curtis in Bicycle Land blog

The story of my attack: http://tinyurl.com/onfftmh