VIA the City of Antioch Environmental Resources Facebook page I learned that the weekly City Manager's report contained the following short sentence.

Does this mean that at long last there will be a connector trail to Oakley so I don't have to risk my life on Lone Tree? That would be great.

I, as always, am a bit skeptical. I rode by there and there is some work going on, but it isn't on the trail itself, it's next to the trail. They are building a wall to keep dirt from washing where they don't want it. I didn't see any work being done on the trail itself.

Currently there is a trail there, but it's gated off and in ill repair. I've heard various tales about why it was never open for use; everything from the developers who constructed it didn't meet East Bay Parks specs to the Water District somehow torpedoing it.

But if it does actually get built and opened, it will be so extra very cool.

Here's the East Bay Park's page on the tail, with a pretty good map, and a screen shot from the area where the trail is being repaired (marked proposed here.) 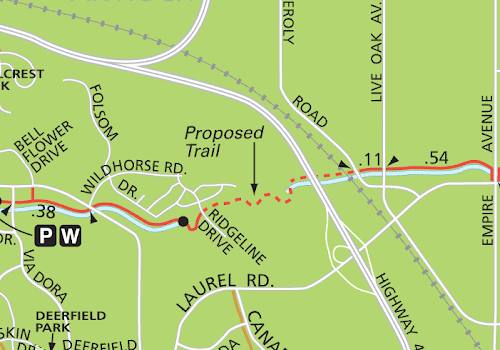