I've posted about glass and boats in the bike lanes and about discarded baby baskets. But today it's just about regular garbage.

In our short Antioch Tour de Trash™ ride we saw so much illegal, immoral and annoying dumping it was amazing. We've heard it's independent trash haulers who, to avoid fees, just dump their clients crap any old place. Maybe that's true, but I'll bet there are just a bunch of losers who are doing it too. I wish our city would actively investigate these dumpings. They could at least look for names and addresses in the trash, and follow up. But maybe that's asking too much from our overworked city services, what with three shooting deaths this past month.

From couches to TVs, people dump the trashiest trash. There were even large plants dropped in the middle of the road at a dead end.

You know these people are sick, sick, sick. Really, who but someone seriously mentally troubled would dump a Harold and Kumar DVD? That's like vandalizing a library book.

We only saw a few shopping carts, but next time perhaps we'll undertake an Antioch Shopping Cart Search ride and see what we can discover. 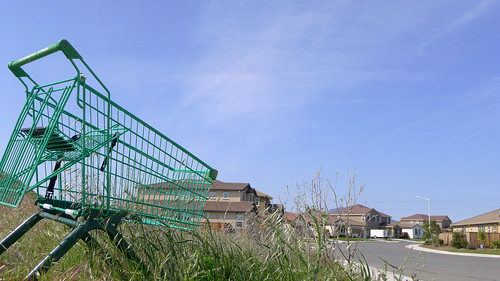 Posted by Curtis Corlew at 3:12 PM