Premium Rush not either 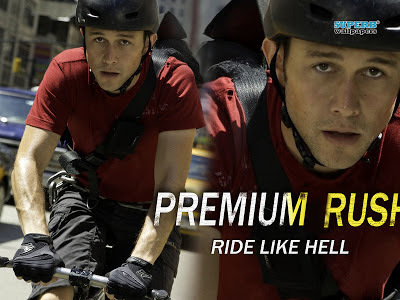 Premium Rush. It's a movie that features bicycles, so what's not to like? In my case, almost everything.

A friend loaned it to me thinking I'd enjoy it. I admit I was a bit worried, having seen the trailer, but thought "What the heck."

This movie pretty much exemplifies almost everything I hate in movies. Let me start with the concept of social responsibility. The bicycle riders in the film, who are the heroes, display no concern for anyone but themselves, and they're proud of it. They consistently behave like jerks when they ride. That might be an important part of telling an interesting story, but it isn't, it's just an excuse to have them ride in an "exciting" way. So either people will imitate them and get injured or killed (creating who knows how much grief for the blameless car driver who hits them) or it will pretty much influence car drivers to believe that all cyclists are crazy and get what they have coming when they are plowed into. In any event, the way they treat their fellow road and sidewalk users is unconscionable. Imagine how you'd feel if your loved one was on the receiving end of their hijinks.

Even though they're the good guys on a mission, they are completely unlikeable and I hope never to have to deal with people like them them in the real world.

As if that isn't enough, it isn't even shot well. The scenes with riders' faces as they pedal look as real as 1960s bad TV. The light on the faces doesn't come close to matching the background. Did they take lessons from McHales Navy or something? And what's with the fixie vs geared bike race? Really? They didn't even try.

This film is just an excuse for a near endless Disney-like chase scene that goes nowhere and becomes tiresome very quickly.

But the biggest failure is that the characters are so flat that I don't really care if they succeed in their implausible goal anyway. It's as if the writers went to the stock character book and plucked out a few. The bad cop with a gambling problem, the troubled misunderstood law school grad, several "inscrutable orientals" left over from racist Charlie Chan movies and a (once she sees the light) stand-by-your-man girlfriend.

Just to be fair, the graphics when our cyclist approaches an intersection and imagines what might happen if he takes different routes look great and are very creative. And several females have commented on the attractiveness of  Joseph Gordon-Levitt, but I'll have to take their word for it.

My recommendation: Rent or buy Breaking Away again.
Posted by Curtis Corlew at 9:01 PM