Even though I tore my calf muscle Friday, forcing me to walk with a cane and cancel my Davis Double Century plans, when the Tour of California comes to your mountain, you go.

I'd ridden Diablo two weeks before in the Devil Mountain Double, last week just for fun, And now the world's greatest cyclists were going to ride the same climb. So I got my mountain bike turned commuter bike out, strapped on the panniers and took the camera on a slow ride to the 1000 foot mark. 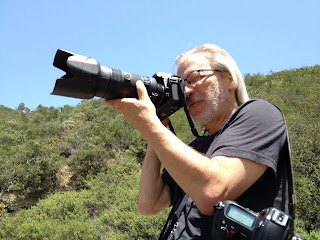 It was a glorious day. Tricia and I had planned to ride farther up, but when we got to LanceOldstrong with his kids, and an ice chest, we figured we'd gone far enough. As we waited we say many bike forum friends, and even a few photographers I knew, including Karl Moldon from the Times. It was such a great day even waiting was fun, as was seeing what must have been more than 1000 fellow cyclists on the road.

After the few minutes of excitement between the break away group and the peleton  passing it was over. Tricia and I went to Livermore to see the finish, which we almost could. The sprint, even from 100 meters, is frightening and stunning.

The photo award of the day goes to Lance Oldstrong for his picture just after the race of his daughter Erin with cyclist Heinrich Haussler. Here's his story: 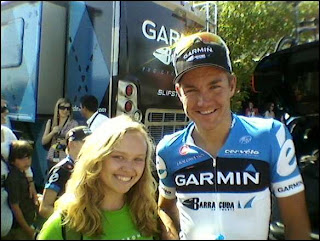 When I asked him for a photo he politely said yes, as if resigned to it being part of his job.
Then I gave Erin a little push towards him and told him, "She has a huge crush on you"This made him light up and display the reasons for her crush: twinkly mischievous eyes, dimples and charm. He said, "Now you are going to make me blush" in his delightful Australian accent.
He and Erin sure made a nice couple and there were lots of "ah, how cute" sighs from the clutch of fans hanging out by the Garmin bus.

Tricia and I followed up with a delightful Greek lunch in Old Livermore where we sat outside and listened to a band play while children frolicked on the village lawn. What a day. Even with a funky leg a great time was had. 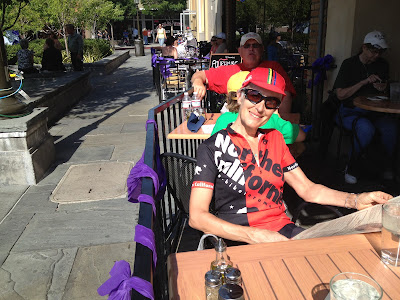