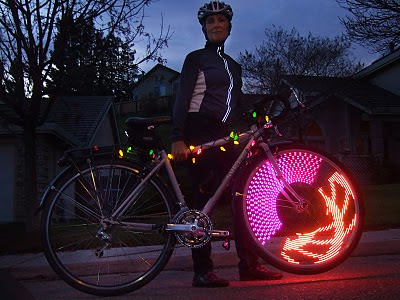 Here on the west coast in California the 2009 Winter Solstice will occur at 9:47 a.m. on Monday, December 21, 2009. Even though that's the shortest day the sunrise will get later and later here until about Jan 7. The good news is that sunset is already getting later.

In any event, we are ready for Solstice with celebratory lights on the commuter bikes. Here's Tricia with hers.
Posted by Curtis Corlew at 5:34 PM