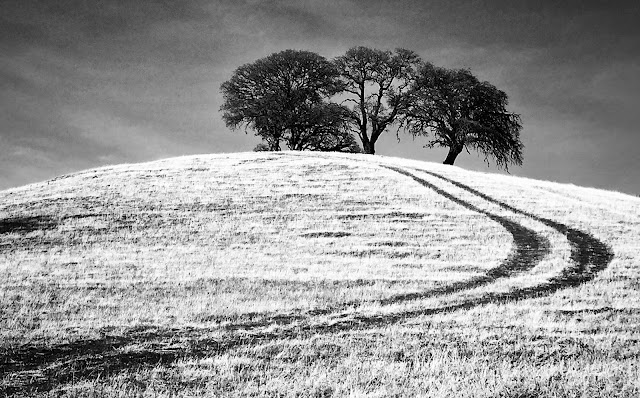 As I freely admit, I'm a roadie and not a mountain biker or a gravel rider. But given the events of early January I felt like I needed to be out in nature. I took my commuter bike turned gravel bike with its 650B wheels and wide tires out to Round Valley East Bay Regional Park.
The very first hill is steep enough that I couldn't ride it. I don't know if I could ride it even if I had lower gears, which are certainly on the schedule to get. Not that the gears I have now aren't really low. I just need even lower. Then, not being a mountain bike or gravel rider, I found the first downhill pretty intimidating as well. I felt like I was taking my bike out for a walk.
Fortunately things smooth out from there. I was able to ride almost all of the rest of the trail without any trouble. I do have have to admit I'm not a huge fan of those cow hoof holes that make the ride incredibly bumpy. But there weren't too many sections like that.
On the other hand, the setting is absolutely beautiful. Once I got away from the parking lot and off of the terrifying hill I felt like I was all alone in the world. And it's a beautiful world indeed. I didn't even see other cyclists or hikers for most of the ride and felt like I'd been transported to another time. OK, another time with nicely scrapped dirt roads and trail markers. But still, another time.
I was amazed how long my short ride took, but walking and grunting is a slow process. But I'll give it another shot now that I know what to expect.
Posted by Curtis Corlew at 5:09 PM