"Everybody has a plan until they get punched in the mouth.”
—Mike Tyson

I had a plan. I want to ride a gravel tour next summer. I have a bike I’m using as a commuter bike that’s sold as a gravel bike, so perfect, right? I’d even swapped out the compact (50-34) crankset for a 46-30 already, giving me reasonably low gears But I wanted bigger wider tires, having been seduced by the Path Less Pedaled wonderful youtube channel (and also their web site.) I wanted The Supple Life, as they call it. 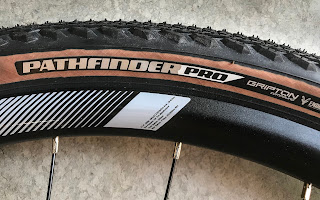 With that supple dream in mind I bought a set of FSA 650b wheels. They’re smaller in diameter than the normal 700c wheels that come on road bikes, and my commuter/gravel bike as well. The idea is that you can run big ol’ tires that provide a smooth ride over unpaved roads on a bike they wouldn’t otherwise fit. Disc brakes means there are no worries about matching a rim brake surface as the discs are in the same place on any wheel size. What a great idea.

I chose, after entirely too much agonizing, Specialized Pathfinder Pros in 47mm width in beautiful natural gum sidewall glory. They come in 38 and 42 as well, but I’m seeking supple, so 47 it was.

I’ve learned lots thus far and still have a ways to go. 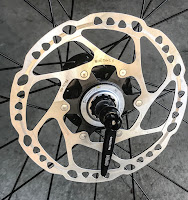 Eventually I had the rim tape on, the tire on and seated reasonably well, and the cassette installed. My bike has fenders installed for commuting, and I knew the wheels would be a tight fit with the fenders on if they fit at all. That's OK, it’s just a test.

The fenders are really too narrow for these tires to work completely as fenders, but there was still room to mount the wheels.

You knew that was coming, right? Even though there’s enough room “north and south” for the tire/wheel combo, the large tire barely clears the chain stays. As in just a couple of  millimeters. I’m guessing that isn’t enough for the real world where I would expect the tire deflect a little over bumps, expanding to rub the stay. 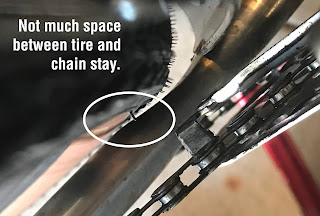 Ironically the chain stays have small indentations just out of where my tire ends. If I’d used 700c tires the same width they might have actually fit. Maybe.

I could just pretend it fits, but that’s stupid.
I could get new less wide tires and sacrifice some of the much heralded supple life. Then eBay the 47s at a loss. Will 42s fit? Who knows... Or just get a 42 for the back because the 47 in the front is just fine?

I could give the tire wheel combo to my wife to use on her Salsa Vaya. She’d get the 640b supple life advantage and I’d have to figure out how to install the end caps for use with her thru-axel. At least the caps were included. 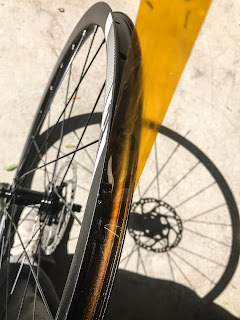 I'd put a tube in the front wheel and pumped it up to seat it. I did this before realizing the tape was important, but the at least the tube didn't pop. I deflated it to remove the tire and install rim tape. Alas I cannot remove the tire. It is apparently exactly where it's supposed to be. I can't get a tire lever under it, I can't roll it sideways. I was going to try a screwdriver, but it's too tight for that as well, and probably not a good idea anyway. How is it possible to remove this tire? I am so stuck.

If I ever solve this I’ll try to figure out if my 32 tooth cassette is low enough, or should I go to 34 or even 36. And if I do that, do I need Wolfstooth Roadlink, or a new derailleur line Shimano’s GRX 810 that is speced to handle a 34. But could it be stretched to take a 36?

I haven't actually signed up for the gravel ride yet. I've not put down a deposit. Maybe this is a message from the bike gods telling me I'm a roadie and need to stay in my lane and get out while I've only wasted money on wheels, discs, tubes and tires and not a new chain, cassette, derailleur and tour fee.

I finally got the tire off, the rim tape on and the tire back on. I may have figured out how to do it; by squeezing the bead into the center and swearing loudly.

I'll be riding to work Monday with this set up to see how it rolls. I'mm still concerned about that tiny 1mm or so of not-reallly-enough-space for the tire.