If it doesn't kill you, blog about it

Note: there's a followup on how I'm doing at this link.

Anything that doesn't kill you can make a great story later department:

First off, the bike is OK. And the blood will wash out of my clothes. I think. 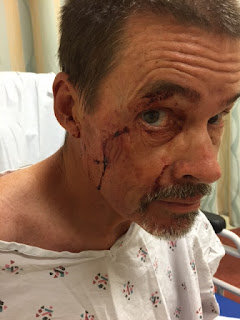 The story:
Today, after playing tennis and working on an art project at Los Medanos College I was riding home along the lovely Delta de Anza Trail in Antioch, California, a city on the Sacramento River Delta. As I rode behind Turner School in Antioch two young lads came onto the trail and, as I passed, knocked me from my bike. They may have hit me in the head, or kicked me. I have a very weird mark on my face.

They took my iPhone 6 and demanded my wallet, which I was too befuddled to cough up.  I'd fallen on my left side pannier, and it was perhaps hidden under my tennis bag, which was strapped to the top of the rack. They didn't take the pannier or my ratty tennis bag, and I still have the junk I was carrying in the pannier.

Oh. I left out the gun part. They had a gun. A GUN! I saw that alright, but it's amazing how little else I "saw." Just two slightly-built young men, maybe middle schoolers, short hair, and a shiny revolver. That's about it.

I climbed on my bike and rode to the place I get my hair cut to call the police and Tricia. She took me to Kaiser where I was treated (by a doctor who's a cyclist!) for a three fractured ribs and a knee that required stitches.

It looks like I'll suffer no permanent damage, but right now walking, or moving at all is very painful. The Doc says I'll be in hurt city for a month or so, and that even though I hurt a lot now I'll hurt more as it heals. Yikes. 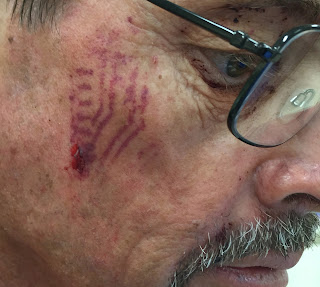 I'll leave out the really bloody photos, but look at this. Is that a shoe mark, or a pistol whip mark? I didn't fall on this side, so I'm not sure.

Here's my Garmin track. (Yep, I GPS my commutes. I am a geek.) There's a dot where it happened, and you can see the little wobbles right where they hit me. If I'd only had a GoPro... 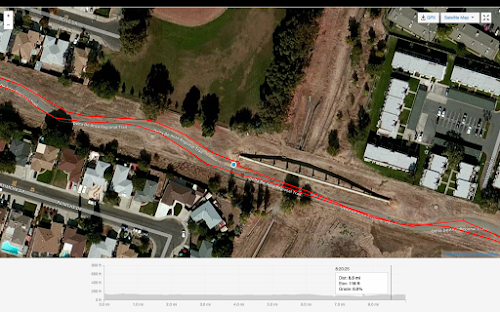