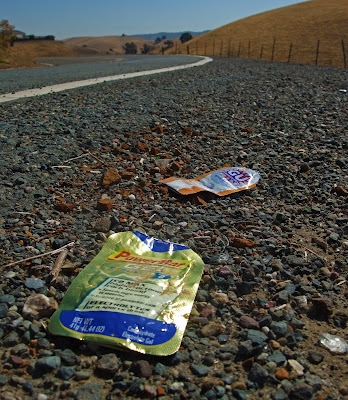 Indeed, WTF cyclists?
I thought we were better than this. After all, we enjoy being outside, and I thought we all had some common understanding that trashing the environment is a bad thing. We rail enough about broken glass that we should be able to make the leap and realize that we shouldn't be contributing to road side garbage piles.

But I guess not.

I ride Empire Mine Road as part of my short local loop. It's a sweet road that's closed to automobiles that runs through some ranch land. Lots of cyclists use it, either as an out and back, or a back road between Antioch and Brentwood.

Last week I picked up two 700c inner tubes and two C02 cartridges. (I guess the mountain bikers are off the hook on this.) This week there were several gel packs at the top of the hill. Yech.

Just as a side note: If you need to stop at this little rise to power gel up, you are too much of a wimp and poseur to be out in the world on a bike without training wheels.

I don't think those litter-cyclists will read this because I don't think they know how to read. But if you see those jerk wads littering, feel free to stick a frame pump in their spokes, or snap a quick photo of them for me to post.

If, by some chance I'm writing about you, cut it out. Put that stuff in your pocket and stop being such a wiener.
Posted by Curtis Corlew at 3:45 PM

Email ThisBlogThis!Share to TwitterShare to FacebookShare to Pinterest
Labels: litter