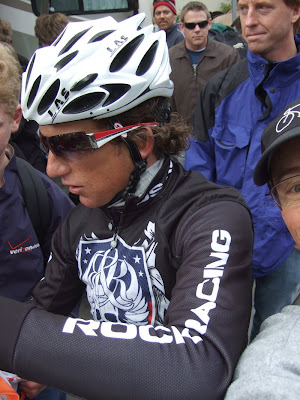 Tyler Hamilton of Rock Racing and a fanboy on the right.

The Tour of California prologue was cold, windy and totally amazing. Tricia and I almost took our bikes, but it looked like rain so we ended up being pedestrians. You can read all about the tour on a zillion blogs and news sites. I've been going to Versus TV, CyclingNews.com and the Fredcast.com.

But here's what it was like to be there: I've never seen so many bicycles and riders. The teams park trailers on side streets near the start. You can walk up and watch them warm up on bike stands that hold their bikes. You can oogle their equipment. I got to see that Rock Racing rides Kestrel bikes like mine, only they do it faster. Some teams hand out posters and other swag. It's amazing to be so close.

There's a large "Lifestyle Fair" near the start,which is really a lot of mostly bike-oriented booths that ether have cool stuff on display, or are selling cycling stuff. We couldn't resist the great deals at the Hincapie booth, and ended up with a jacket and some shorts.

As much fun as it is to watch cycling gods zoom past, it's impossible to know exactly what's going on. I took my daughter's iPod touch hoping to get a wi-fi signal so I could keep up, but it didn't work. So near the end we found a brew pub and watched on TV, where we could see the whole course and know what the times were.

After the race we went to a restaurant for a meetup with cycling bloggers. We got to meet many of the people whose blogs I follow. David of the Fredcast, Fritz of Cyclelicious, and Jonathan Tessler from Bicycle.net. It was very cool to find out the people I read and listen to have actual faces and drink beer.
Posted by Curtis Corlew at 9:16 AM

Email ThisBlogThis!Share to TwitterShare to FacebookShare to Pinterest
Labels: fredcast, tour of california