I just replaced my year old Ultegra 6700 shifter cables, and was shocked to find it was frayed all all get out. I received this info from 200miler on Bikeforums.net mechanics forum. It's for older shifters, but I'm posting it here just in case it's helpful.
Note that this was forwarded to me with no providence, so if it's yours and you don't like me posting it, just let me know.

Photos are at the bottom.

Read all of these instructions and make sure you have all tools available before starting. This is for the right (rear der.) lever—you may not need to get into the left one. Shift to the smallest rear cog, so that the cable end in the lever lines up with the hole. Undo the shift and brake cables from their respective components and remove them from the lever assembly (squeeze the brake lever and you can see the shift cable end at the side, and brake cable end in the middle, looking from the front.) The 105 levers have no cover plate, just a 5mm allen bolt in the middle of the front. Start by loosening (not removing) that bolt while the lever is still on the bike. You’ll have to remove the handlebar tape from that side and fold back the rubber hood; it’s also a good idea to take a felt marker or laundry marker and outline the position of the clamp and base of the lever, so you can easily re-install it. Remove the whole lever assembly from the bike with a 5mm allen slipped under the hood on the side, where the groove is.

Next, remove the levers assembly (where all the “guts” are): At the hinge on the bottom, you’ll see the hinge shaft and a spring. Below the hinge, you should see a small allen screw, a 2mm, I think. Remove this screw put it somewhere safe. You should then be able to push the shaft out one side with a drift or similar tool. Be careful of the spring, and the two plastic spacers that surround the shaft holes. Note how it all goes back together (put them in a safe place).

Remove the large 5mm bolt from the front. The housing (dark gray, where it says “105” etc.) pulls off the front. You may have to gently pry it and work it off. Careful, it contains a round spring and a thin plastic spacer. As you remove it all, you should see that the side of the spring with the end that is slightly straighter, then bend to a right angle, faces the housing (this is hard to describe, but you’ll see the difference if you look carefully). Put aside, etc. On the back of the assembly, there’s a rotating “barrel” that holds the brake cable end. You can pull that off to get it out of the way.

The brake lever, which also serves as a housing for the guts, comes off next: Look at the underside, where the small lever connects, and move the small lever to the side. There’s a small Phillips screw under there. Loosen it (it should have a speed nut on the inside to hold it in place) and the large lever/housing will come off, exposing the guts. There’s a small metal spacer around the bolt hole on the FRONT, it may come out, too.

DO NOT loosen the large nut on the back of unit where the brake cable barrel attaches. There should be no need for a complete disassembly; usually a good cleaning is all that was needed. You should be able to make the mechanism work. It helps to GENTLY clamp the back portion in a vice so that you can easily move the levers. Just push the large lever back on and shift in that direction, then pull it off and shift the small lever and you can see how it works. You may have to use small screwdrivers to gently lift the ratchet pawls to free things up. Go carefully. It has been suggested that WD-40 is a good solvent for cleaning this assembly. You can saturate the works well, let it sit, then work it and clean out any gunk that is visible. When finished, shift it back to the “small cog” position, so that the hole for the shift cable is horizontal and will line up with the cable hole on the front housing.

REASSEMBLY: One of the tricks I used was to use a cyanoacrylate (Crazy-Glue type) glue to tack the spring ends in place. ( I used Super Jet glue, which thicker and sets up quickly) But first, replace the large lever/housing and secure with the Phillips screw. Replace the brake cable barrel. Position the plastic spacers in the hinge area. Put a drop of glue on the right-angle end of the spring and position the end in the hole, with the spring aligned with the shaft hole. Let glue set up. You have to slide the lever assembly onto the base assemble so that the other end of the spring is compressed against the base. Hold it all together and slide it on, aligning the holes (easier said than done). You may have to use a smooth smaller shift like a small screwdriver or nail to get all the holes aligned so that you can slide the shaft in. On the shaft you’ll see a wide groove: this aligns with the hole for the set screw. Slide the shaft in and get it centered. Replace the small Allen set screw. The spring should hold the lever closed.

Replace the front housing assembly: First, use a large zip-tie, rubber band, or whatever around the lower part of the large lever and base to hold the lever partly open. This frees up the space around the front housing, which has to be rotated into place. If necessary, replace the metal spacer in the middle of the front. The spring has “tabs” bent up at each end; they are slightly different; one is at a right angle and one is at a smaller angle. I positioned the right angle tab in the housing. It goes into the cut-out slot at the top of the housing. Use a drop of glue there to hold it place (not too much!). If you want, you can also use a very small amount of glue at 2 or 3 places around the groove in the front of the assemble (not the housing) to hold the plastic spacer in place. You have to insert the other end of the spring in the small hole at the bottom of the assembly, then rotate the front clockwise to get the (square) hole in the front to line up with the square protuberance that surrounds the center bolt hole. The spring wants to come out of the hole, naturally. The technique I finally came up with was to insert the spring, then, before rotating, carefully insert the bolt and get it started, to keep the housing centered. Then turn the housing, keeping enough pressure on to the keep the spring in place. You can usually see if the spring comes out because there will be a gap between the housing and the assembly. Once aligned, tighten the bolt. If all is well, the gap will be small and uniform, the large lever will shift smoothly, and the small lever will do its job. If not, remove the bolt and start over. Once done, make sure the hole for the cable end is aligned with the housing hole, by shifting the small lever. You should be able to sight through the holes by squeezing the lever and looking through from the “outside” to the “inside,” with respect to the position of the lever on the bike. Insert the brake cable, and get the brake cable housing properly aligned and seated in the body before (or while) remounting the lever on the handlebar. Insert the shift cable through the lever and into the housing. CAUTION: Make sure that all shift cable housings are seated, all slack is out of the cable, and the cable end is attached to the derailleur before working the shifter. 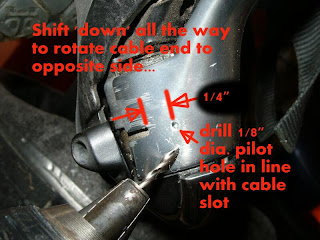 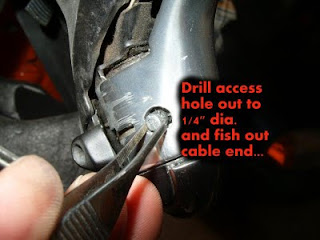 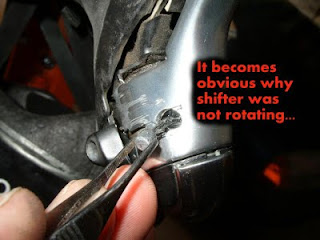