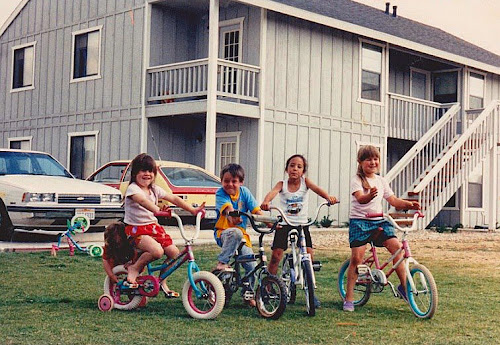 "It wasn't long after we moved to Tehachapi, that Kellie started hanging out with local Tehachapi toughs and joined her first gang." — Kellie's Dad, Gregory McCown

Kellie left her cycling life behind for a number of years, but now she's back. Tired of automobile problems, and moving to bike-friendly (at least a lot more than Antioch) Sacramento, she bought "Margarita," as she calls her new bike. 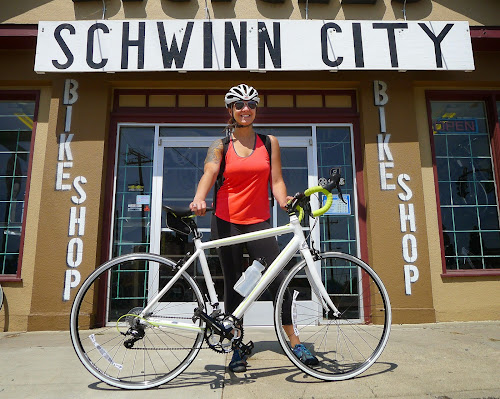 I clearly remember the day my Dad took off my training wheels, and exactly how it felt. That wonderful sense of balance and freedom returns every time I get on my bike. It's been fun talking to a new/old rider who is rediscovering how nice it is just to be on a bicycle.  As we rode along the canal trail she just kept saying "This is so fun! This is just so fun!"

Of course, I've been cycling almost forever, sometimes it's easy to forget how many little things I've learned over the years — like how to take open quick release, how high the saddle should be, how to patch a tube, how to watch for the door zone and right-turning cars that too-often fail to stop. The list is endless, and trying to figure out what's important to share now and what would be a too-huge information dump is a challenge. Is it better to shut up, or mention a pump and tube might be good things to take on a ride away from cell phone coverage? 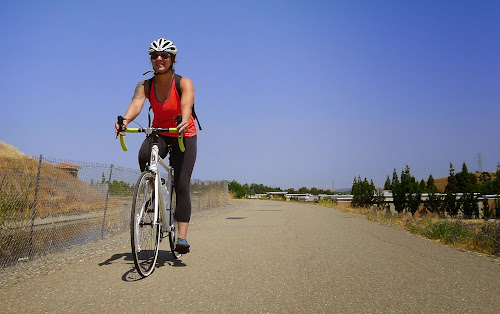 Kellie has a zillion questions though. I'm hoping to teach her how to fix a flat before she leaves town. She's also planning to take an Urban Cycling class. I think she'll be ready for anything. 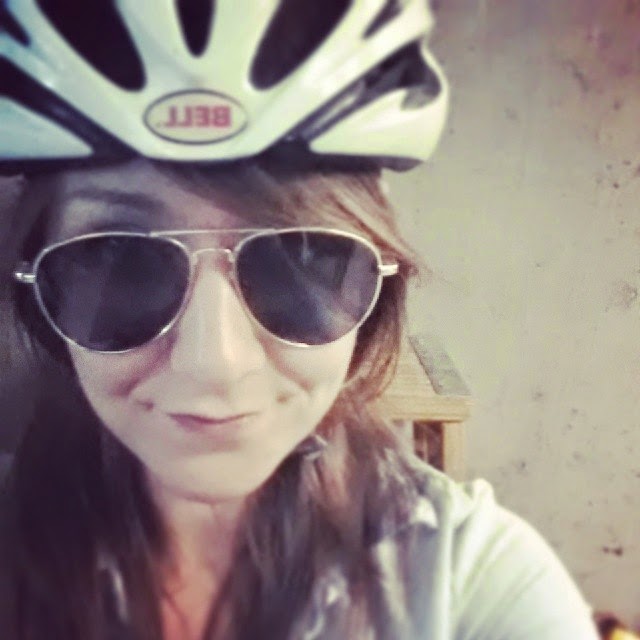 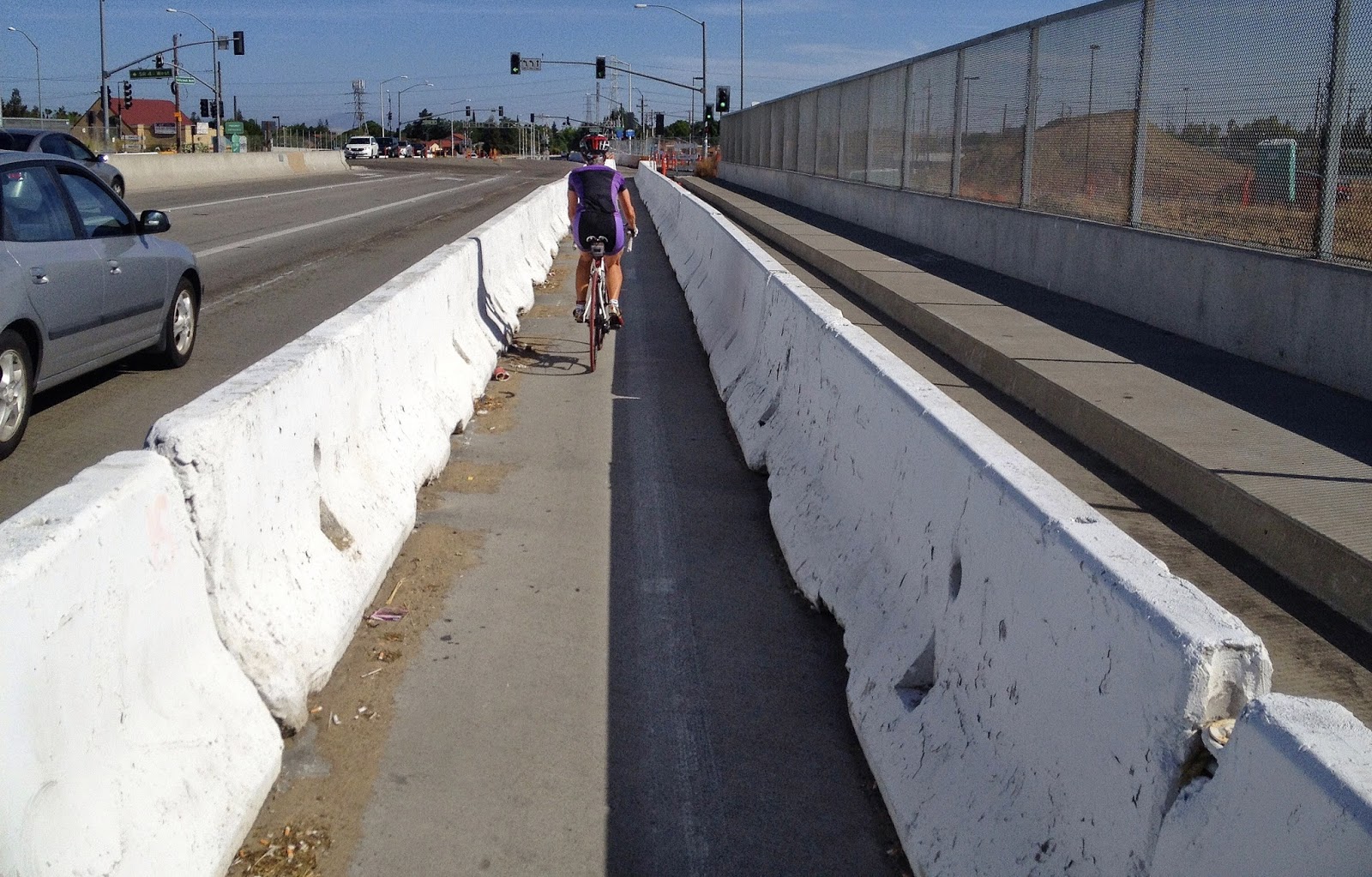 I don't know what we did to warrant such concern for our safety, but I hope it's a trend.  The highway 4 over-crossing at Hillcrest in Antioch now sports concrete barriers, not just on the auto lane side, mind you, but to the right as well, protecting us, from... whatever is over there, which is nothing, or perhaps protecting the nothing from us.

It isn't as pretty as the flower containers used elsewhere for the same purpose, but I still like it. Sure the areas leading up to the bridge are far from bike friendly, but this fifty yard section is just fine.


Posted by Curtis Corlew at 1:10 PM No comments: 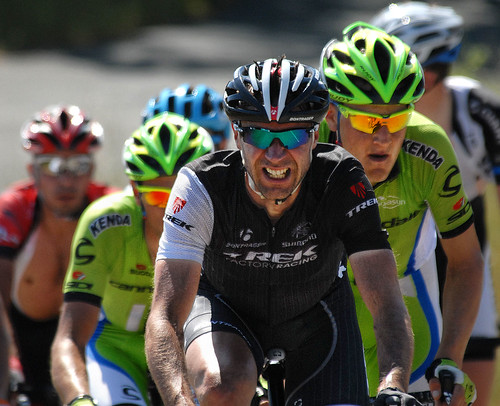 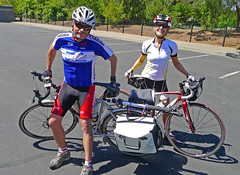 It was hot, it was uphill, it was hot (And it was also hot), and we carried a ton of  picnic goods and camera equipment just to make it harder. Still, it was totally worth riding up Mt. Diablo to just past the junction to see the ATOC cycling gods.

Tricia pointed out that we needed to make a day of it, and not just live for the quick passing of the peleton (and it was pretty quick indeed.) So we started up the mountain around 11, me on my heavy fenderized commuter bike with full panniers. Thank goodness for really low gears. I like riding uphill, but Tuesday I had to keep reminding myself to relax and take it easy. I did. I passed no one, but many passed me.

We ended up at Lookout Point, just past the junction, relaxing under a tree with some very cool Lithuanians transplants in nicely designed cycling jerseys. We chatted and watched the horizon for the helicopters that would signal the riders were approaching. Eventually we could see them arriving as small specks on a distant road. 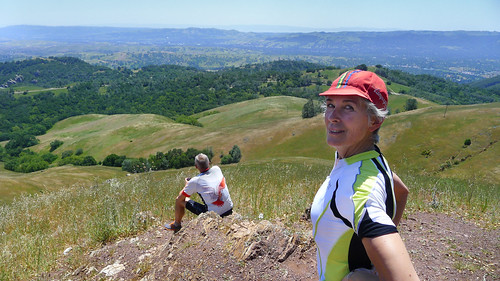 They came by so amazingly fast. Where we were, the leader, several seconds from the main group was the Mexican National Champion. After that is was a blur for me. But it was a wonderful blur. 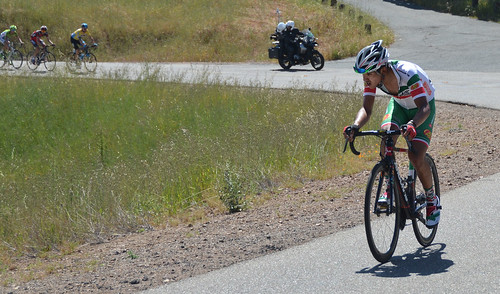 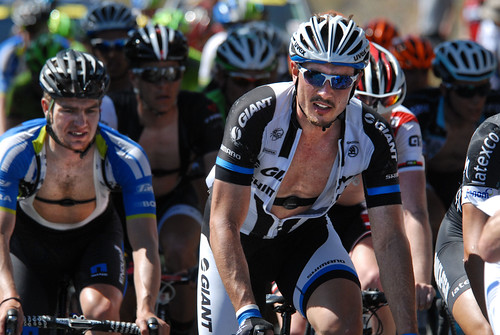 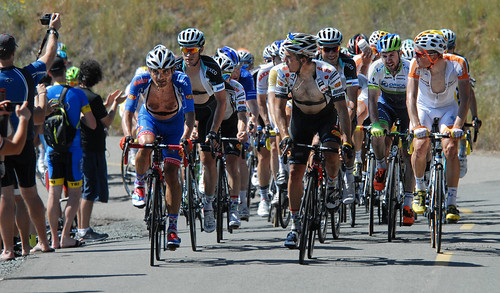 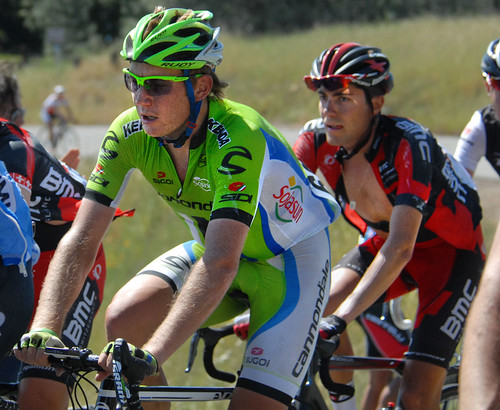 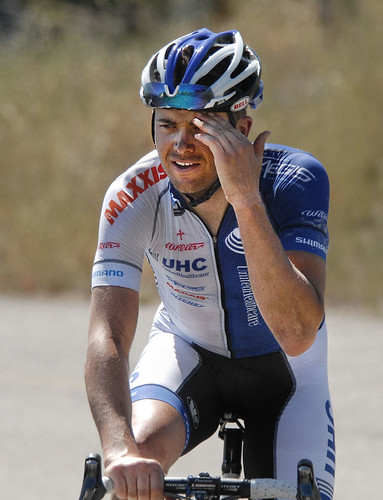 Riding back down after the event I was noticing the large number of women cyclists who looked, and rode, like they were serious about it. At one point I couldn't help but admire the athletic shape (if you know what I mean, and I think you do) of a young woman who kicked past me near the bottom on a slight uphill. Then, as my gaze rose higher I realized "Oh, that's Tricia."


UPDATE: From the small world department, one of the cyclists from Lithuania, Vitas, found famed blogger Diablo Scott's cell phone on Diablo and returned it to him. Read about Diablo Scott's VIP experience at the summit of Diablo. And just because they are so wonderful, here's a photo of their jersey I like so much. 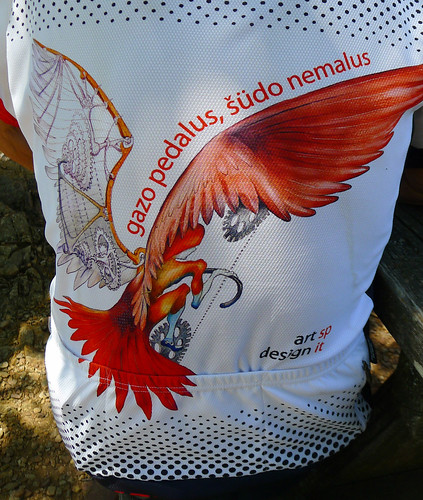 Posted by Curtis Corlew at 9:55 PM No comments:

Email ThisBlogThis!Share to TwitterShare to FacebookShare to Pinterest
Labels: atoc 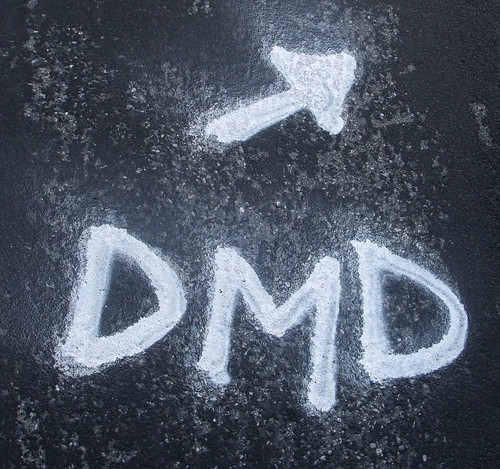 Two weeks ago I started the Devil Mountain Double Century. I DNFed at mile 150. But I can't stand that, so today I drove to the point I stopped — the Crothers Road rest stop in San Jose — and rode the course the remaining 54.9 miles (and 5000 feet of climbing)

In tennis, winning the four major tournaments in a year is called a Grand Slam. But winning four in a row outside a year is termed a Non-Calendar Year Grand Slam. Therefore, I'm henceforth referring to my 2014 DMD as a Non-Calendar Devil Mountain Double Finish. Don't try to tell me different.

The pinched/compressed nerve in my neck that affects my shoulder and was the big reason I bailed out still hurts like something that hurts too much, but bothers me even more when I'm in the drops, when it hurts way way too much. I'm doing some doctor-recommended voodoo stuff, and I've raised the bars on my commuter bike to an embarrassing height. I may feel better some day, but it wasn't today. 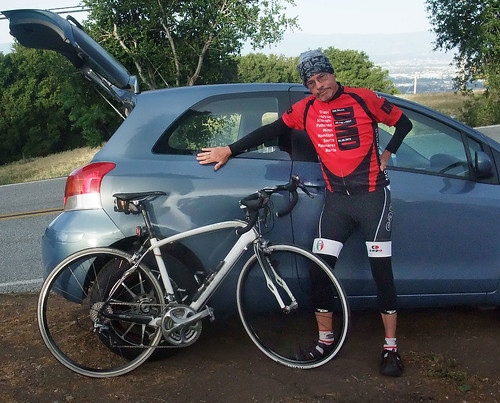 Today was a lot like the weather of two weeks ago, windy and a bit on the cool side. I wore knee warmers, glove liners under my cycling gloves and a buff most of the day. I took along my very lightweight Pearl Izumi Barrier Jacket  for the early downhills and I'm glad I did.

Because this was a point to point ride, I left home before 6 am and left the car at Crothers Rd. Tricia picked me up in San Ramon on her way to visit family, then dropped me to pick up our car. 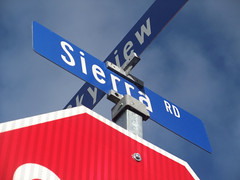 From where I started the much-heralded Sierra Rd comes up soon. It's steep after 100-something miles, but it's steep even when you're fresh. And there's no lead in. You turn from a normal road, and boom, straight up. When I went with LanceOldStrong to see the Tour of California stage finish there I was amazed how hard it was even to stand and not fall over. It's that steep. (Gradient chart) 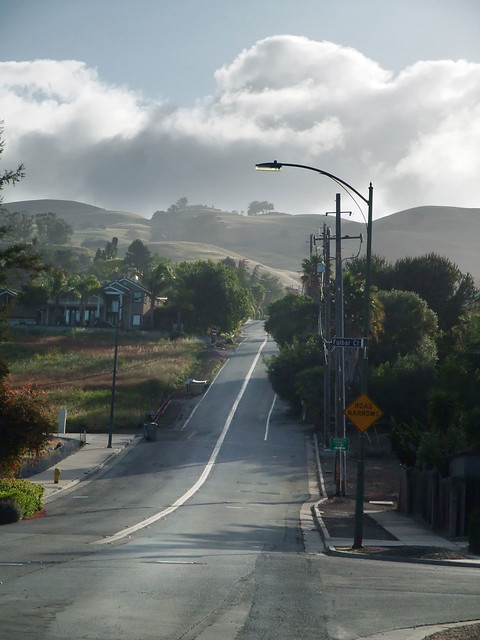 The morning sun slipping through the clouds, a beautiful view, and not being worn out helped make it less awful than I'd remembered. Still, I'm not making light of it. I think I went up about 5mph. It took forever.

After the rich people's houses, the road turns very, very narrow for a while and it's easy to imagine you are riding hundreds of miles from any city. 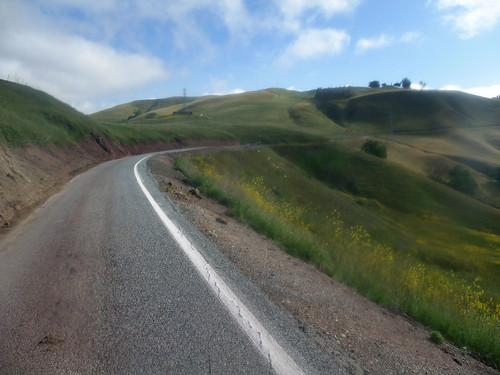 Later, along the beautiful Calavaras Road I saw a large shape in the road. It was ground squirrel-sized, but not ground squirrel-shaped. It was sci-fi quality big. Frighteningly big.  I shooed it off the road after making a few photos. My naturalist son says it's a non-native invasive species and I should have considered leaving it where it was ... but I don't think I could have.

This, of course, is the kind of photo I'm forced to run when I'm not riding with Tricia, who is a much more attractive subject. 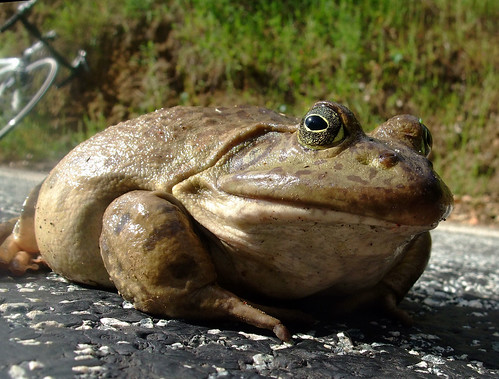 I eventually arrived in San Ramon, two weeks later than planned, with no trumpets or banners. Tricia, however, was there for me, with water and some Whole Foods sushi, so it was all worthwhile. 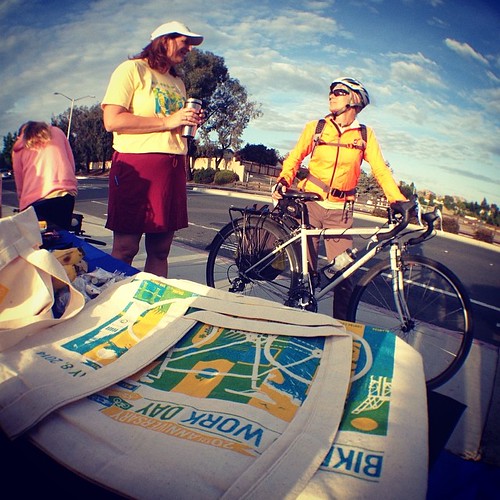 Julie Haas-Wajdowicz hosted the Bike to Work Day station at Lone Tree in Antioch. Tricia and I stopped off on our rides to work to say hello. Being as I ride my eight miles in to work every day, I didn't really need to stop this station and the one on Somersville for a treat. But I did. I also got this year's canvas bag, which I will treasure. Thanks!

Just in case you landed here, don't miss the Bike to Work Day posters my students made.

Posted by Curtis Corlew at 10:58 AM No comments: