LanceOldStrong and I rode the Volunteer edition of The Marin Century. The route was great, with no stupid miles in towns with traffic lights. The whole course was beautiful, and it seemed like we saw about three cars all day. The only issue was wind, wind and yet still more wind, with wind. At one point Dan stood up to hammer and a huge gust just about stopped him cold. We spent and amazing amount of energy to blast along at 12 mph for way too long.

We just about got used to wind and accepted it, then we'd stop and think "Holy smokes!" as the wind whipped us about and blew stinging sand into our flesh. At one point we looked over at a small inland pond and there were white caps and waves. Really.

Still, somehow, it was a fun 103 miles, and will hopefully prepare us for our upcoming Knoxville Double.

And we still can't say enough about the Marin Cyclists Club. They are so nice, welcoming and organized. It's really been a pleasure riding and working with them. Posted by Curtis Corlew at 8:14 PM No comments:

Diablo and training for the Knoxville Double Tricia and I rode with Joyce on Saturday. Northgate to the Diablo Junction, down the South Gate and out through Reliez Station Road in Lafayette and Pleasant Hill. Here's a photo of Joyce because she hasn't shown up here lately, and the clouds were just grand.

I'd ridden the junction with LanceOldStrong the week before, and also done a series of five hill repeats up Somersville Rd to Black Diamond Mines on Thursday. I'm getting in my climbing, but I think I'm getting slower instead of stronger. Here's hoping I'm ready for Knoxville. My goal there: Finish alive. That's all, just finish.
Posted by Curtis Corlew at 3:15 PM 4 comments: LanceOldStrong and my own bad self volunteered to staff a rest stop in Point Reyes Station for the Mt. Tam Double. As part 4 of our quest for the California Triple Crown Thousand Mile Club we are required to volunteer at a double century. We picked the right one. These folks were great. As LanceOldStrong pointed out, they used our time well and gave us what we needed to be at our best for the riders. We showed up to a stocked van and a huge binder containing just about every piece of info imaginable. If you ever plan to volunteer for a ride, you couldn't do better than working with this group.

Our rest stop rocked, and we enjoyed greeting and feeding riders as they rolled in. Dan made about 12,537,736 PBJs and seemed to enjoy building every one of 'em. Here's the deal: A ride with climbing, in my book, is any ride that gains 100 feet per mile. This ride was a mere 41 miles, but with 4,412 feet of climbing. Not so bad, unless you factor in that it all happens between 6000 and 7800 feet. There's just no air up there, and if you live at sea level you really feel it. That said, what a ride. It was impossible not to stop every few feet just to gawk at the amazing vistas.

Click this image to see a larger image. I'll leave all the guidebook stuff about volcanic action and lava and such to real web sites. I'll just point out that if you ever get a chance to go here, don't think twice, just do it.

The cycling is grand. The roads are smooth as they are closed in the winter, and there are no big trucks chewing them up, because they don't go anywhere commercial. During the week there isn't even much traffic. Aside from the very real lack of oxygen, it's pretty much ideal.

And did I mention the scenery? We camped out, cooked out, fought mosquitoes, drank a bit 'o wine and had a grand time. We talked to Sacramento Wheelmen who had a group ride through where we were, and had a nice time chatting with a California Triple Crown jersey wearer we encountered on the rim trail.

We even managed to stop off at the Sundial Bridge in Redding on the drive home. As you might know from my posts here, I recently lost my father. I'm going through the painful task of sorting through his possessions and getting his business in order.

My wife, Tricia and I talked with my father about our planned trip just before he passed, and my brother insisted we really needed to go, so we decided to go ahead with our plans.

A day before we left, as we were headed over to work on Dad's condo when Tricia asked "Did you check under your Dad's bed?"

I hadn't. When I did I found a small box labeled "Curtis Treasures"

Inside were a few small objects from my childhood, including a top, some beads, a peace symbol, and a few other items. Among them, my early 1960s Boy Scout camping silverware.

We took them on our trip and used them every day.

In an odd coincidence, my sweet wife had packed away her darn-near-matching girl scout version of the same kit, which she dug out and took along as well. 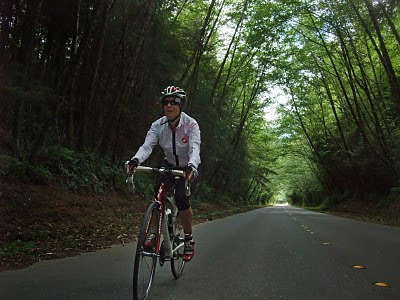 Tricia and I are visiting Mariel and Keith on our way to Crater Lake. They live in the lovely town of Blue Lake near Arcata. We managed to sneak in thirty miles this morning, and we are so glad we did. We rode through redwoods, through fog, and through country lanes covered by the tree canopies. We rode over Mad River, worthwhile for the name alone.

Keith picked our route, and together we managed to build a circular route in Google maps using the bike feature and MyMaps points. It generally worked, though we're still puzzled over one odd turn it suggested. 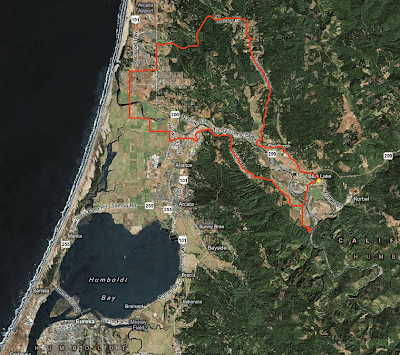 Posted by Curtis Corlew at 2:56 PM No comments: