It's time to come clean.
Hello, My name is Curtis Corlew, and I'm a jersey addict.
Not only do I love 'em, but I've always wanted to design one. I finely got the, or made, the opportunity. I've designed a jersey for the 50+ forum on bikeforums.net. I'm collecting funds from members and will have champ-sys.com make it. It's a bit worrisome collecting lots of money and keeping track of who ordered what sizes, but the reward is that I'm getting a lot of response. I'll be sending off the design next week for actual proofs.
Posted by Curtis Corlew at 8:39 AM 4 comments: Links to this post 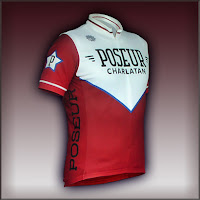 I so want this jersey. It's me. So I made a deal with my own bad self. If I can get my weight down to under 140 (as in 139-point-anything) I'm going to buy this overpriced thing. Sure, it costs too much, but nothing is too good if you are skinny. Plus, I still need to ride to the top of Mt. Diablo to meet my Summer goal, and being a lot lighter will help.
Posted by Curtis Corlew at 9:31 PM 1 comment: Links to this post

On Saturday July 14 Tricia and I joined 8998 of our closest friends at the University of Washington, Seattle for a 204 mile two-day ride (2230 people rode it as a 1 day ride!)
The 28th annual Seattle to Portland ride organized by Cascade Bicycle Club had riders from 44 states, England and even Serbia.

This was our first century, and on day 2 our second century, and we lived to tell about it!
I embraced my "Fredness" and bought a glasses mirror, a bento box type carrier and a larger seat bag so I'd be sure to have arm warmers and a jacket, Cliff bars, a cell and camera, keys, and other creature comfort junk. 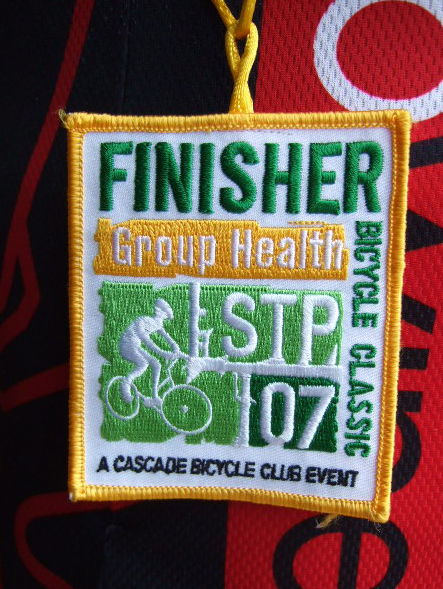 Our legs held out, and we'd put on enough miles our rear ends were fine. We'd both purchased new saddles about two months before, mine a Selle Itilia SLK and hers a Terry Falcon.
Tricia rode her Trek 1500 and I rode my Motobecane Le Champion SL. Though I carried a camera, and have been known to shoot while riding, I didn't do much this trip. There were just too many people around, and I was concentrating on my riding.


Riding in a group of 9000 really gives you a look at cycling diversity.
There was every age, height weight and fitness imaginable.
We saw bikes that were scary amazing full "unobtainium" zillion dollar machines and bikes that were just plain "Lube my chain? HUH?" scary.
Among the diamond frames were numerous recumbents of numerous styles, some with windshields and full fabric enclosures, tandem recumbents and the cutest recumbent with a tag-along child carrier that the kid peddled.

With the numerous tandems there were also a couple of -- what to call them -- 3 person tandems?
There was a even big wheel unicycle and even a skate boarder.

We did see a few bikes that made us wonder what -- or even if -- their riders were thinking. Bikes that had us wondering if they would make even a trip around the block. But we were well prepared having listened to the Fredcast (a way cool cycling podcast) on preparing for your first century. We even replayed Fredcasts 05 and 07 on the drive to Seattle. The STP organizers also have a lot of info on their web site that helped us feel ready for our biggest ride to date.

Though it was 104 degrees two days before, and raining the Tuesday afterward, the Cascade Bicycle Club ordered up perfect weekend weather in the upper 70s. Under the scattered clouds we could often see Mt. Rainier as we rode through Washington.

The midway point in the small Washington town and Chehalis for 2 day riders. We stayed with a really nice family that opened their home as part of a soccer club fund raiser.

Two of the other highlights are crossing the Lewis and Clark Bridge into Oregon. The state troopers queue up riders, close the bridge to traffic and couple hundred riders own the bridge as they pass over. It's done for safety, but the result its a great view and an amazing sight.

Coming into Portland and crossing the finish line makes you feel like you've just finished the TDF. There were literally hundreds of people cheering as we rode in. It was almost embarrassing.
Because the ride has only one minor climb a day. I'd recommend it for anyone wanting to try a two day long ride, and it seems like an ideal ride for those wanting to knock off 200 miles in one day for the first time.

We had a great time.
Posted by Curtis Corlew at 8:28 AM 2 comments: Links to this post

I've been told this video doesn't play on some computers, and my server seems slow lately. Here's a link to a lower quality version on YouTube
Posted by Curtis Corlew at 10:58 AM No comments: Links to this post