On Thursday I tried using the The Time Crunched Cyclist by Chris Carmichael method of testing Functional Threshold Power. It's basically two eight-minute attempts at full tilt. You take the average heart rate and power from your best run and that's it. He claims that it close enough for rock and roll.

I found a flat section of road in Brentwood and, even though you're supposed to do it on a windless day and it was blowing like mad, I gave it a shot.I averaged 197 watts at 164 beats per minute, so in theory that's my FTP that I use to set training efforts.
Edit: Or maybe it's five percent  lower that the five percent lower a twenty minute test gives. But Carmichael says the difference is built into his workouts, so even if it's not my real FTP it's a working number for the Time Crunched Cyclist workouts. Clear now?

But of course there are those who differ. Some claim that you really need a 20 minute effort, and furthermore that doing it on a grade is not only just fine, but the real way to make it work.

With that in mind I packed my bike up and headed for Mt. Diablo. Unfortunately half way there I realized I forgot my Garmin. Oh well. I was going to blow the whole thing off, but my daughter who I met in Walnut Creek pointed out I had a Strava app on my phone to track the ride, and I should go do it anyway. So, with no heart rate or power capturing I went for a ride.

I was feeling pretty good and pushed just a bit. Maybe the cat 6 racer in me came out because even though several riders blew past me I was determined to not let a guy who started just after me catch me.

I was surprised to see a bucket full of PRs on Strava when I uploaded my ride. Now I really I wish I'd have had my Garmin to see what my power and heart rate were. Posted by Curtis Corlew at 2:42 PM No comments:

Pigs, Bears, a lake and some Bacon Under the surprisingly dark sky and spitting clouds Tricia and I clawed out 53 miles and 4000 feet of climbing with Dan on Memorial Day.

Our first climb of the day was Pig Farm. I wonder how much longer Pig Farm Hill will be called Pig Farm Hill. The pigs disappeared in the 70s, and yet the name lives on. For years there was a "Pig Auction" sign, but now that's gone too.

We went on to the "Three Bears" even though I can never really tell why they're called that, or which is which. But the hard climb of the day was Altarinda Drive with its occasional twenty percent sections. Coming out of Orinda, it's just a grunt.

We slid around Lafayette and went back though Dan's secret Walnut Creek route that includes a climb on Bacon Court, which makes sense considering our first climb was Pig Farm.

I need more rides like this, and it was great to be piloted by, and ride with, Dan again. My new power meter confirms I have no actual power. I still need to do an  FTP test, but that won't be happening today.

Power! or, I've lost my mind Yep. That's exactly what it looks like. And it's mine. You may be asking yourself "Why does a non-racer who is getting old need a power meter?" Or simply "WTF, Curtis?" And honestly, you're right to ask.

As with most tales ending in really weird decisions, this one has a long history of nonsensical thinking.

It started last year when I decided to try using The Time Crunched Cyclist by Chris Carmichael to train for double centuries. I used a heart rate, but clearly all the cool kids were using expensive power meters.

When my friends started buying new expensive bikes that was just the prompt I needed to start the rationalization machine. (I'm looking at you, Dan, Steve and Ron Ng.) Wheels cost so much less than a new bike I could save money!  And, I have a really big birthday coming up this year. If I don't buy myself something wonderful, how could I expect anyone else to? So I started researching on BikeForums.net, and started this thread. Much to my amazement several great deals appeared. Deals that made me not want to wait until October but to act now. So I did.

I bought used G3 powertap wheels from a truly kind man on the opposite coast. Objects are fun to own, but I think what drives us is the stories that go with them. Would the Mona Lisa be so captivating without the tales that come with it? My seller provided details so carefully documented that they must actually make the wheels lighter and faster. Here's a short excerpt of his information.

The front wheel is a 20-hole Ligero front hub. It weights 65 grams and features Phil Wood Abec 10 bearings. It is laced to a Kinlin 27mm rim with CX-Ray Spokes. The front wheel weighs about 610 grams.

The PowerTap started as an SL 2.4 wireless hub. It was the top-of-the-line PowerTap at the time and weighed about 420 grams. It was upgraded it to ANT+ after the PowerTap computer was broken. (They used to come with a proprietary yellow computer.) Then last year, it started giving bad numbers, so was sent to CycleOps, and they replaced the inside with the new G3 system. Basically, it was a completely new PowerTap other than the outside shell.

The rear also is laced to a Kinlin 27mm rim

Kinlin rims are affordable, lightweight and reliable rims. They are very popular among custom wheelbuilders. You can get them from White Mountain Wheels, Psimet, Zen Cyclery, Wheelbuilder.com or Bikehubstore.com.

The wheelset was built by Troy Watson, whose company was Ligero wheels. Troy had been a wheelbuilder at American Classic and Litespeed as well as the wheelbuilder for the Garmin Slipstream team many years ago. He designed his own hubs and had them manufactured by Wheels Manufacturing. The design he came up with is basically what Alchemy is using now.

I put some white-wall Michelin Pro Race tires on that I'd been saving. I like the white look,but who knows how long it will actually stay white.

Now my job is to figure out how best to use it. In addition to  The Time Crunched Cyclist I also purchased Training and Racing with a Power Meter by Hunter and The Power Meter Handbook: A User's Guide for Cyclists and Triathletes by Friel. Both are aimed more at real athletes and tri-geeks, and are filled with incomprehensible charts and graphs. I'm enjoying being overwhelmed by data and hope I can make use of it all, or even part of it. The books recommend just riding with the power meter for a week and then getting serious. I have summer vacation starting next week, so I'll try setting up a Functional Threshold Power (FTP) test then.

If you have suggestions for Mac based software, please let me know. Tour of California on Diablo!

I cleverly decided to ride my commuter bike, complete with fenders and racks, so I could carry my cameras, lunch, extra water and clothes and Tricia's book. Yes, book.

It turns out there is a reason cyclists like light-weight bikes. Climbing with a ton of junk on a heavy bike is a slow process. It's also hard on ones ego as riders pass by, and pass by and pass by.

Eventually we landed just past the junction where we had a great view. We could even see the riders miles away as they came up the South Gate. We also had a picnic table up a small hill where we ate lunch and goofed off while we waited for the cycling gods.

As always, they flashed by in an instant. After the leaders, the rest came, and then the slowest — slowest being faster than I could ever be even in my dreams.

I took two cameras. It turns out my newest Nikon doesn't play well with my slightly-older lens. Tricia used my Panasonic and out shot me. Not that I feel too much shame, she's a clever lass indeed. Still, I'm supposed to be the photographer dude. She even made a nice photo of me posing as photographer dude. We'd been a bit worried about descending after the race with so many on the road, but there were no adventures.

We drove over to Sports Basement where they were serving beer at their post tour party. For free. I list this as the greatest retail innovation ever.

Posted by Curtis Corlew at 8:17 PM No comments: 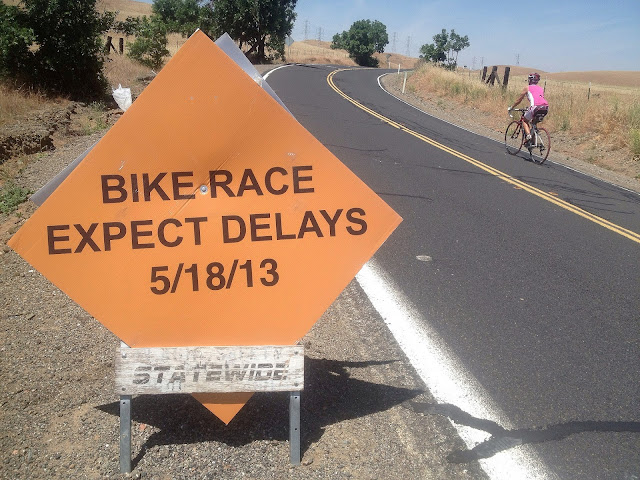 What could this possibly be? Why, it's a warning sign on Camino Diablo Road in Brentwood, where the best cyclists in the world who aren't named Fabian Cancellara will be racing the Amgen Tour of California. I'm getting positively giddy as the race date approaches.

The racers will ride a grueling course that ends at the Diablo summit. Tricia, on the other hand, is so monumentally awesome that she can straddle the entire mountain like the Colossus of Rhodes. In cleats no less. 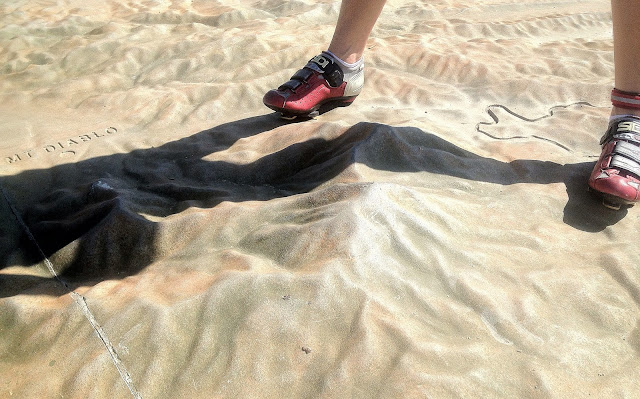