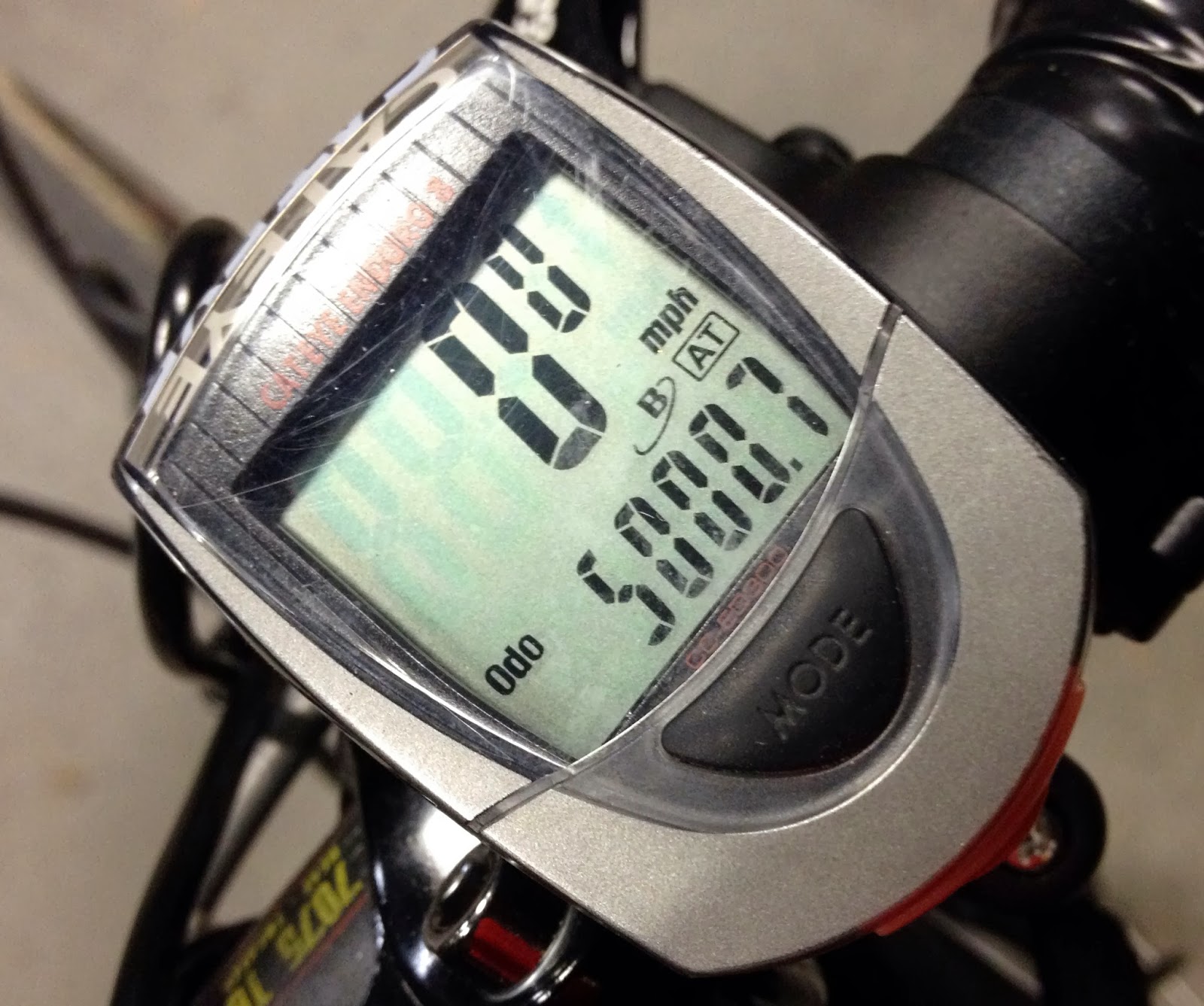 I just turned 5000 miles on my commuter bike. This is not a huge deal, but it's still a milestone for me and my bike I feel I should note.  Photos or it didn't happen? Here ya go. You can read all about my journey to developing the bike here with this canned search of this blog for "Outlaw," the brand of cross bike I bought in mid 2012.
Posted by Curtis Corlew at 6:16 PM 3 comments: That little dot at the bottom of the photo? That's Tricia, with the Morro Bay Rock in the background. We go to a Journalism Association of Community Colleges faculty conference every year, and usually leave Sunday at noon. This year, due to Monday being a holiday we stayed an extra day to get a chance to ride Perfumo Canyon. What a beautiful place, with a wonderful, but sometimes almost-too-steep climb, and stunning vistas. We need to go there someday just to ride. The central coast, like all of California, is suffering from the drought. The hills that were vibrant green last year are merely brown now, and not even that California golden-flavored brown, just brown. The weather was a delightful high 70s, but I almost felt guilty enjoying it. Almost, but not guilty enough to skip riding.

As always, we also managed to get out for a taste of local Paso Robles wine and a bit of local cheese.

And, yes, the conference was great too. From the hands-on mobile journalism workshop to the legal updates speaker, JACC knows how to put an event. Posted by Curtis Corlew at 6:38 PM No comments: Tricia and I didn't ride Diablo on New Years Day, as is tradition. We'd come home from Washington DC the night before and between the time change and dehydration of the plane ride we were just too toasted. So we went Jan 2, 2014. That still counts, right?

It was a stunningly beautiful day, with near record warmth and no fog. We launched from the Arbolado Park and grunted our way (well, I grunted, Tricia looked just fine) up the North Gate to the junction. There we met a a few other riders, one of which was Zeke, who had started from the Castro Valley BART station and climbed up South Gate on his way to the summit. Not a bad ride, but perhaps a bit more impressive considering he's doing it solo and is 12 years old.

As rode with him up to the summit I almost felt guilty. I'm on my carbon Roubaix and he's on a bike with front shocks, a rack and a pannier. Having ridden up on my commuter bike with fenders, racks and panniers I know what a difference all the weight makes, and it must make even more percentage wise for a light rider like him. But I said almost guilty. I'm not giving up the Roubaix.

Edit: I just found this great story on him. He's even more cool than I realized.