Yep. I've done it. I'm all signed up for this monster, the Solvang Double Century. I know it's early, but I'm hoping that signing up, and knowing I've got to be ready, will provide me with even more motivation. There's a rough of the route on Bikley. I've at least got months to decide the larger question: What jersey should I wear?
Posted by Curtis Corlew at 7:40 PM 1 comment: Links to this post 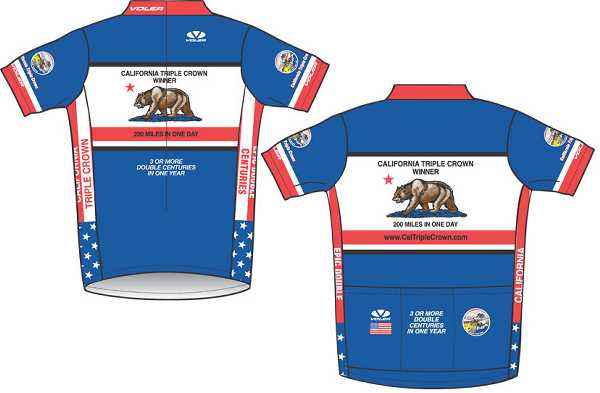 I've envied my friend Ron's California Triple Crown jersey (awarded by the folks over at caltriplecrown.com) for a long time now. I want one, but apparently you have to actually ride the three double centuries in one year to get one.

I'm thinking about going for it in 2010. I guess I think posting the possibility may be a first step in making it a reality. I'm pretty much a non-athlete, and my biological clock it ticking loudly. If I'm going to ever do this stuff I better do it soon, as in next year.

I've done the Davis Double the last two years, which I'm proud of. Over 130 DNFed this year, so I'm not at complete bottom of the pack. Just close. I think if I focus maybe I can pull this off.

After that I'm not sure. I don't want to drive to LA for the weekend, though there are rides that look do-able there. And I freely admit I'm trying to pick rides I might be able to actually finish. That leaves out the Devil Mountain Double, as well as many others.

So I'm thinking number 3 should be
Eastern Sierra (though this year the weather was brutal) in June
or
Bass Lake Power House, in October.
UPDATE 10.10.09:
I'm adding the possibility of Knoxville to the list. It seems like a lot of climbing, but you do get 19 hours to complete it. I do like that it's close to home. If the weather isn't a problem it sounds possible!

Tricia had been talking about getting a trainer. I thought I'd get her one for Christmas and started researching them. I'd decieded on fluid rather than wind or magnetic, and the Kinetic got the the best reviews. It also appears to have earned the "least likely to leak" award.

Then I found an ad on Craigslist for this Road Machine at a reasonable price. Heck with waiting for Christmas. I bought it.

It set up easily, and we just finished installing Tricia's first road bike (her Trek 1500) on it.

I haven't tried it with my Kestrel yet. I don't know if I'll turn out to be much of an indoor cycling guy, but I'll give it a shot. Rumor has it that indoor riding can be good for short suffer-fests that result in increased strength on the road, so it may be worth it.

The geek in me is looking forward to trying out Coach Troy, Chris Carmichael and Graham Street DVDs.
Posted by Curtis Corlew at 10:14 AM No comments: Links to this post